Midnight on Monday, I was heading back to tomorrow, but I had the feeling I had unfinished business in the district. Then, it hit me. In my 6 days here, I had never visited the DC institution, Ben’s Chili Bowl. 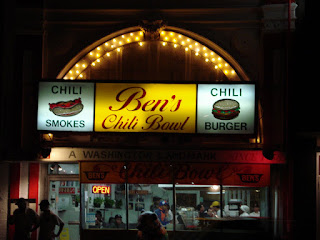 Started in 1958 by Ben and Virginia Ali, Ben’s Chili Bowl is situated in the middle of what was called the “Black Broadway”. Much has changed since the late 50’s, but Ben’s Chili Bowl has been one of the few constants of the U Street Corridor.


Ben’s really is a part of DC culture and history as is their most famous dish, the half smoke. 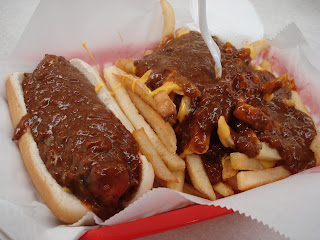 People often ask what a half smoke is 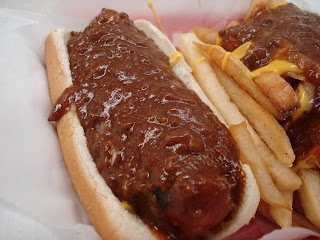 From what I’ve gathered, it’s essentially a jumbo hot dog that has coarser ground meat and a little more spice to it. Here a half smoke is dressed with mustard and onions and then covered in Ben’s house chili. Once you take the first bite you know you’re in for a messy battle. When I neared the end, I had a realization. This is essentially a high class gas station dog, and the chili was something else. I couldn’t decide if it was the taste of rancid oil or too many burnt seasonings, but that chili had been on the burner too long.

While the half smoke could stand on its own, my batch of fries soon became a sore sight. 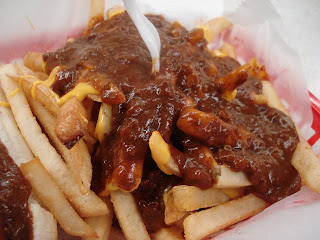 The fries were soggy, and after the helpings of cheese and chili, they were like a wet paper towel.

I don’t mean to badmouth Ben’s Chili Bowl, it is a DC institution, but it seems to be running more on name than actual product. Of course, my first mistake was being at the Chili Bowl sober. If you’ve had a few, there are few things finer in DC, but for me, I’ve had my last half smoke for a while.

And I think a half-smoke is half beef, half pork. I could be wrong...