If you ever look up on chowhound, ’s Drive In is a constant recommendation. Personally I’ve never been that much of a fan, but earlier this week I needed somewhere in Fondren for lunch, and Walker’s seemed like the best choice.

Once inside, you can’t help but read all of the articles on the wall. From columns on the chef to a visit from Guy Fieri with “Diners, Drive Ins, and Drives”, ’s has had quite a bit of publicity. They’ve had so much publicity that they didn’t have anyone to seat the customers. I realize that this was a busy lunch hour, but it’s unacceptable for people to be forced to huddle aimlessly in the hallway.

When we were seated, service was decently prompt, and soon enough, I was served my appetizer. 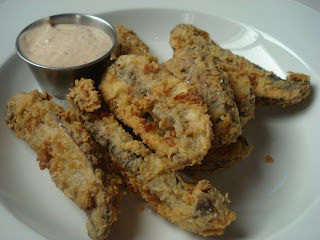 ’s is known for their Portobello fries and for good reason as their fries are crispy and lightly salted on the exterior but moist on the inside. I don’t know how they did it, but ’s has escaped the dangerous trap of soggy mushroom fries. 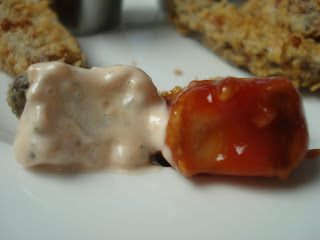 I tried the fries with both ketchup and the supplied comeback dressing. ’s has a very thick comeback and it works very well with these fries, but I can’t imagine it on a salad. Personally, I would go for ketchup or plain, but you really can’t go wrong either way.

Looking to avoid the daily special of chicken tetrazzini, I went with the house crab cake instead. 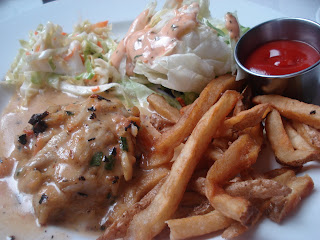 You can’t fault ’s for skimping on the sauce or on the amount of crab meat. Those succulent pieces of lump crabmeat were swimming in it. 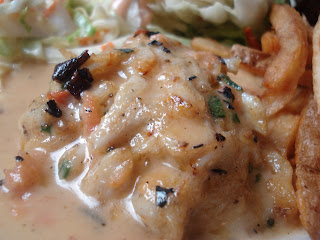 Amazingly enough, once I took a bite of the crab cake, the sauce was just in the background. Instead I was able to enjoy nothing but lump crab meat and just the smallest amount of binder.

All things considered, this visit to ’s reminds me of why I don’t frequently patronize the place. The food may be very well done and the service decent, but there isn’t a cohesive manager to hold it all together. Everyone seems to be doing their job as best they can, particularly the wait staff and the kitchen, but there’s no one there to oversee it all. Regardless, go for the food and trendy atmosphere, and just for that.

Mr. South, given the time of year perhaps you could provide your Irish readers with a good corned beef recipe?

Have you never been for dinner. You are missing out dinner is one of the best in the city. I am a regular and have seen chefs from other restarunts dinning there as well. That is usually a good sign.