Once of the best things about the seriouseats.com is the photograzing section, and a few weeks ago, I came across a picture that really caught my eye: thai fried chicken.

After clicking on the link, I went from the eating club and eventually wound up at Chez Pim.

Reading how simple this recipe could be, I decided to give it a try myself.

I started by putting about 6-7 cloves of garlic, a tablespoon of cilantro stems ( Pim’s recipe called for cilantro roots, but I had no idea where to find them), kosher salt and a gratuitous amount of ground black pepper. 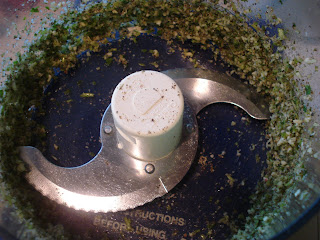 Give it a little whirl and then dump it all into a bowl.

The next step in the recipe called for 3 tablespoons of oyster sauce and ¼ cup of fish sauce. I was fine with the oyster sauce, but when I went digging for the fish sauce, I only came up with one example. I know fish sauce is supposed to be pungent but when the sauce is chunky, I think something is amiss. 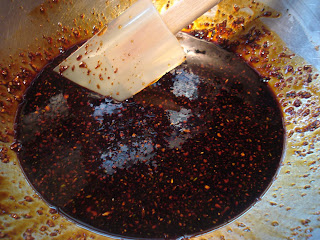 I decided to bypass the fish sauce and added a mixture of dark soy sauce and light soy sauce that would equal a ¼ cup.

I added the chicken drumsticks 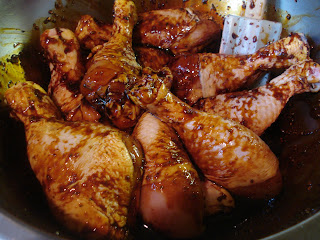 And I put them in the fridge to marinate.

A few hours and few turns later, I took them out of the fridge. 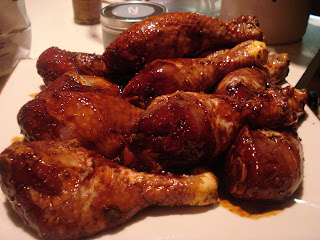 I realize that mine look much darker than Pim’s and the Vancouver Eating club’s version, but call it creative license. 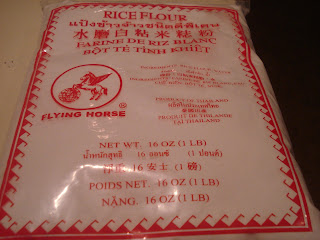 Having drained the marinade, I dunked a few drumsticks in a plate full of flour. 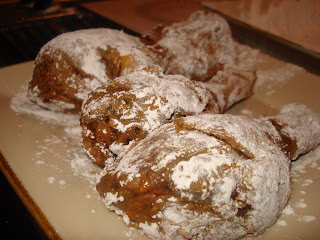 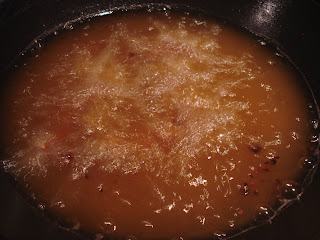 After 20 minutes or so of cooking, I fished one of the drumsticks out, took its temperature and let it rest for a minute. 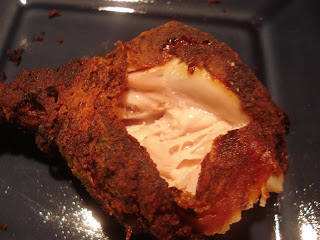 With the first bite, I was really, really glad I hadn’t used the noxious, clumpy fish sauce. These were delicious crunchy and extremely moist, but there was just one problem. My exuberant use of dark soy had overshadowed pretty much everything. Sure, you could taste a little cilantro and garlic, but I had pretty much made soy sauce fried chicken. Regardless, I was pleased. 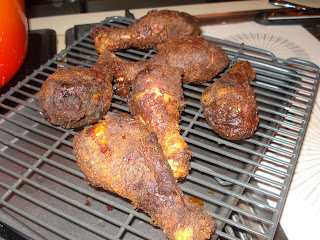 Here’s a great overexposed picture of the leftovers. In addition to easing up on the dark soy, next time I need to add some heat to this dish. It might be a cliché but I can’t disassociate Thai food from spiciness. Maybe next time, I’ll add some sriracha to the marinade. Either way, I heartily recommend giving this recipe a try, maybe you can find some better fish sauce.

Email ThisBlogThis!Share to TwitterShare to FacebookShare to Pinterest
Labels: Cooking at Home, cooking from the web, Fried Chicken, Thai