As much work as I had put into the risotto Milanese, I knew that it would not be an entire meal. Thankfully Mclagan’s “Fat” was chock full of recipes, and the recipe for simple roast chicken caught my eye. Roast chickens and I have touch and go relationship. Every time I think I have new dynamite way to roast the bird, the spices don’t mesh, the bird is undercooked, or everything just falls to shit.

One thing I’ve deduced is that the key to a good roast chicken is a quality chicken. If you start out with some supermarket crap, you’ll end up with subpar chicken. 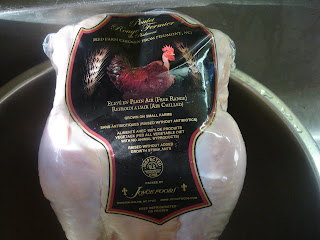 Again, Paul Anthony’s came through in the clutch. These poulet rouge are a free range, organic, and heritage breed that is raised in North Carolina. After a lengthy defrosting, 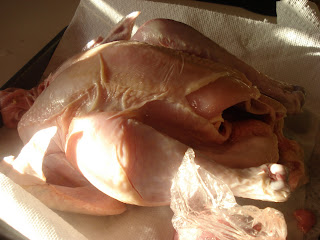 I had a chicken ready to go.

With a book named “Fat”, you didn’t think this would be a low calorie venture, did you? 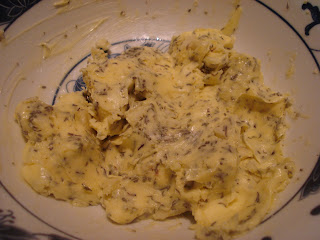 The recipe did call for a smattering of fresh herbs such as parsley, chives, tarragon or marjoram, but I was unprepared and decided to make the compound butter out of some of my available dry herbs. I believe I added some marjoram, thyme, and tarragon to 7 or so tablespoons of Kerrygold butter. 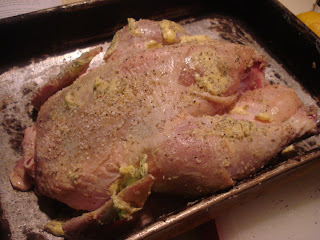 The aforementioned butter mixture was then liberally applied to both the interior and exterior of the chicken, and then a helping of sea salt and fresh ground pepper. 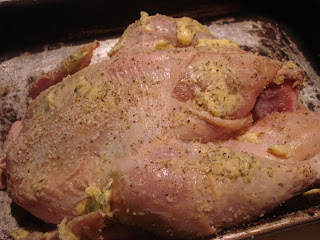 I do mean liberally applied. I’ve had too many dried out birds, and I wasn’t going to waste this poulet rouge. 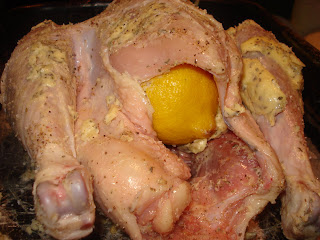 In addition to the butter, the recipe called for the juice of one lemon over the chicken. I halved it, and gave it a good squeeze and then stuffed it in the cavity. Like I said before, I didn’t have any fresh herbs, so I decided to throw a few cloves of garlic in with the lemons.

Into a 450 degree oven for 15 minutes, and then I pulled it out to baste it and lower the oven temperature to 375 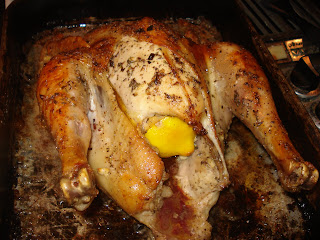 After 45-50 minutes, I turned off the oven to let the bird rest for about 15 minutes 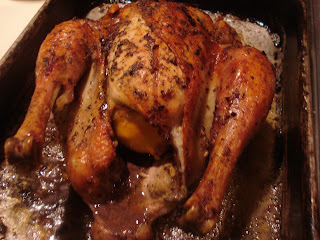 This was the final result. I’ve never had a bird turn out so moist and delicious.

The bird was soon dissembled. 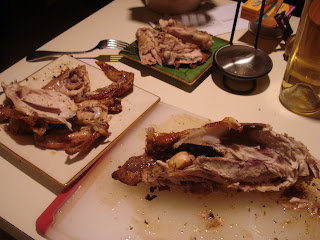 Needless to say, the bird was a major hit. Granted, anything that is smothered in butter will turn out well, but this was a symphony of flavors with just a single fault. The bird was so potent and flavorful that it overshadowed the more subtle flavors of the risotto Milanese. Regardless, Mclagan was three for three with her recipes, and I can’t wait to try another one.