After the Hawaiian-style Kalbi, I decided to give Saveur’s Hawaiian cowboy beef stew a try.

The interesting thing about this stew is that it includes both beef chuck and short ribs. 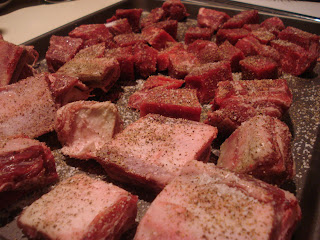 After trimming and cutting the chuck into cubes, I liberally salted and peppered both the chuck and the ribs.

After a quick dredge in flour, I started frying the beef in batches. 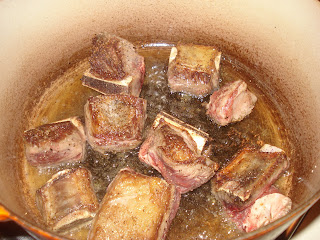 Like when I make my version of beef stew, this is a crucial step for both flavor and thickening the stew.

While all that was going on,I took a can of whole peeled tomatoes and chopped them in a food processor. 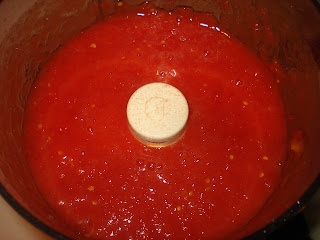 So far, I’m cruising right along with the recipe, however that will all soon change.

As soon as the beef was done, I set it all aside and added 8 cloves of chopped garlic, cooked them until golden drown and then added the tomatoes, beef, 3 bay leaves, about 8 carrots that had been cut into 2 inch lengths, and 2 cups of water. 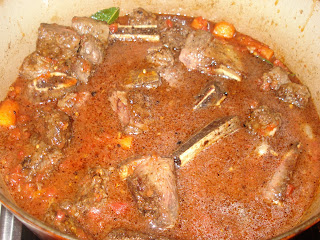 I thought this had potential, as I brought it all to a boil, and then simmered for 40 minutes.

The last step is what threw me for a loop. 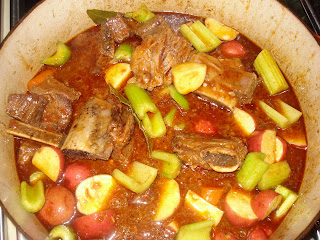 The recipe called for me to add in 2 1/2 lbs of peeled and quarter new potatoes and 5 ribs of celery cut into 1 inch lengths. I had picked up baby red potatoes, but they were a fine substitute. The celery is the odd man out. I just don’t see how it goes with a stew like this, but I’m willing to try everything at least once.

So after an hour of simmering uncovered, I had a look at the stew. 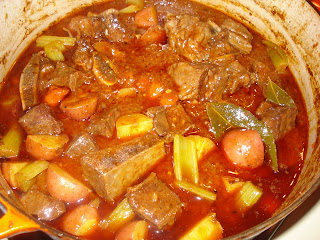 Even with a good helping of salt and pepper, I found it to be watery and bland. I thought it would work to enhance the tomato flavor and I scoured the cabinets for tomato paste, but the best I could come up with was tomato sauce. Even after adding the tomato sauce and simmering for another 15 minutes, the stew just didn’t have the right touch.

At that point, I was frustrated and decided to serve it over rice as is. My main tester & webmaster, Sam was a big fan of the stew and he even liked the celery. After trying the stew, I thought the celery was a terrible addition. Sure it added some crunchy texture to the stew but it stuck out like a sore thumb. With a fair amount of tweaking, this could be made into a fine beef stew, but if I make this again, the celery will be the first thing to go.