After trying my hand at Red Braised pork from her “Revolutionary Chinese Cookbook”, I decided that I should take some of Fuchsia Dunlop’s recipes for a test drive. First up was “shui zhu niu rou” or boiled beef slices in a fiery sauce, and I was enticed by Dunlop’s description of the recipe: “As they say in , it’ll make you pour with sweat, even on the coldest days of the year.” That’s a mighty claim, and I aimed to put it to the test.

The recipe starts out simply enough, with a head of celery. 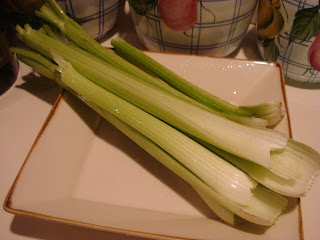 As much as Dunlop writes about the art of the Chinese cleaver, I was surprised at how simple the cuts were for the celery. I removed the fibrous outer edge of the stalk, cut each stalk into 4 sections, and then sliced them lengthwise into ½ inch sticks. 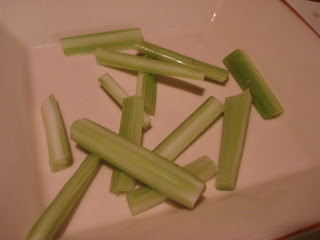 That’s my best interpretation of the instructions. I then took 4 scallions, gently crushed them, and then sliced them into sections to match the celery. 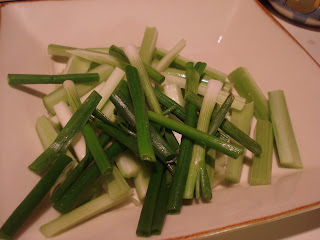 Starting with 1 lb piece of chuck, I tried to cut away as many 1 inch by 2 inch slices as possible. 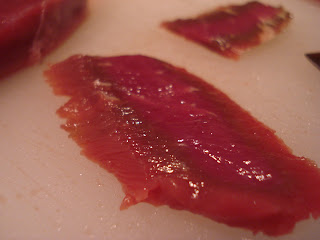 Dunlop tells you that after trimming you should end up with about ¾ pound of beef. 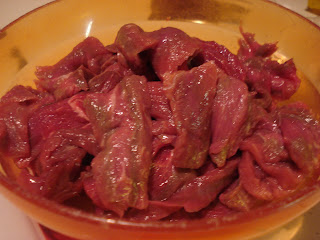 I would say that’s pretty close to ¾ of a pound. I added the necessary ¼ teaspoon of salt and 1 tablespoon of shaoxing rice wine to the beef and left it to marinate.

Being a dish, it’s natural that this dish requires a fair amount of pepper. 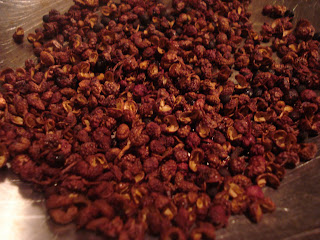 I made sure to roast a few handfuls in a wok until they were nicely roasted. 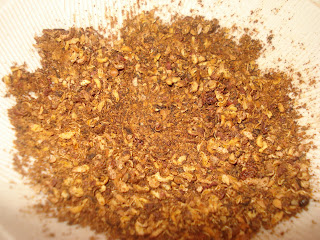 After dumping them in my mortar & pestle, I set to work on them. 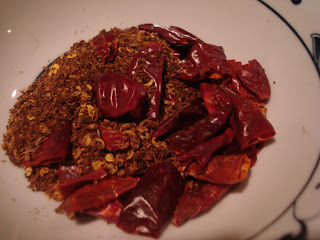 Here’s my bowl of 2 teaspoons of pepper and the dozen dried chilies that I had cut in half and seeded. 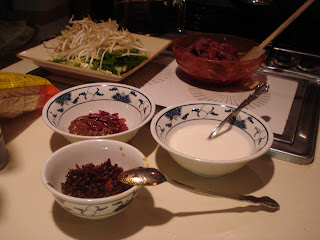 As I’ve said, mise-en-place is key when it comes to cooking with a wok. Starting from the front is 3 tablespoons of chili bean paste, a corn starch slurry, the pepper and chilies,

With the wok hot, I added the oil and waited until it was hot but not smoking. 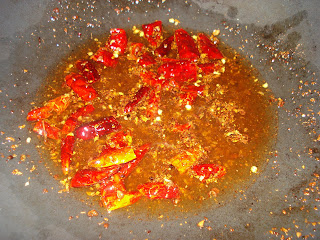 I added the Sichuan pepper and dried chilies and stir fried until the chilies were just beginning to brown. 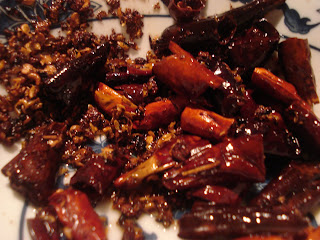 I took them out of the wok and returned the wok to the heat. The odd thing about this recipe is that it calls for you to cool this mixture and then finely chop it. What Dunlop doesn’t tell you is that it is incredibly hard to cut the chilies. They are crispy and splatter everywhere. 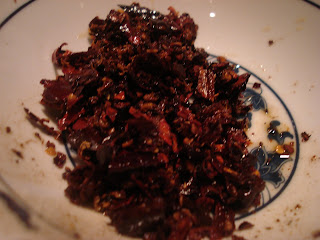 Regardless, here is the mixture after dicing.

Once that is done, I waited until the oil was smoking again and then added in the vegetables. 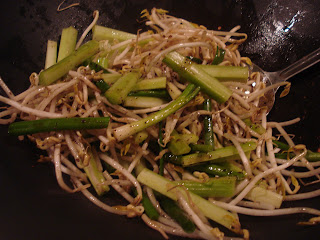 The idea is to cook them until hot and barely cooked. You want to retain the crunch. After cooking, I added them to my serving vessel.

I’m a little skeptical about a recipe that involves an entire pound of celery, but my fears were eased at the end of the recipe. Dunlop explained that the vegetable in this dish is mostly there for a fresh and crunchy contrast to the meat, and that bean sprouts, Chinese leeks, and lettuce stems are often substituted. Not being a big fan of celery, I took Dunlop’s advice and mixed in a good handful of bean sprouts.

Again, I added oil to the empty wok and waited until it was smoking. In went the chili bean paste and I cooked until the oil was a dark red, about 30-45 seconds. Next, in went 3 cups of chicken stock and 2 teaspoons of dark soy sauce. 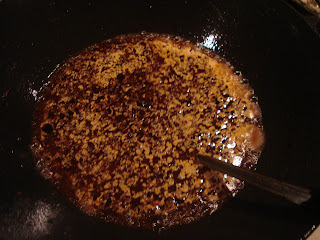 While this was coming to a boil, I added the corn starch slurry to the beef slices. 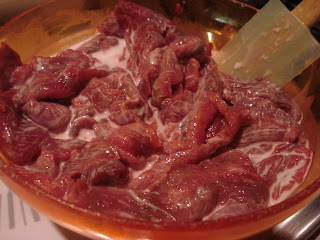 I realize that it doesn’t look that appetizing at this point but it all comes together soon.

As soon as everything in the wok was boiling again, I added in the beef. 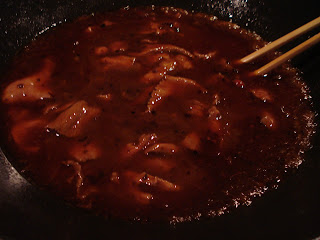 Dipping each slice of beef seemed tedious, and I interpreted Dunlop’s recipe to mean that I should dump the entire bowl of beef & corn starch into the wok. Once the sauce was boiling again, I used my chopsticks to separate the beef until cooked.

The last few steps threw me for a loop. I had to clean out the scalding hot wok, dry it, and then add another 3-4 tablespoons of oil and wait until it was smoking. In the meantime, I added the pepper/chilies mixture over the dish. 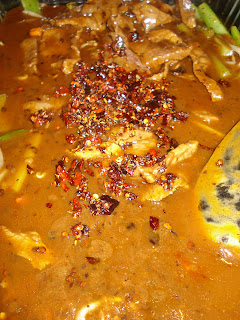 I understand the idea is that you wait until the oil is smoking and then pour it over the dish, and voila! Everything is sizzling and makes for a great presentation. 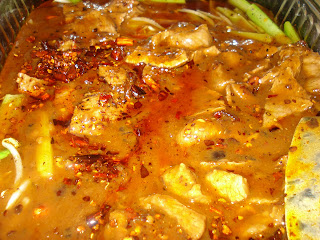 Unfortunately, all it really does is add a layer of oil to the dish. 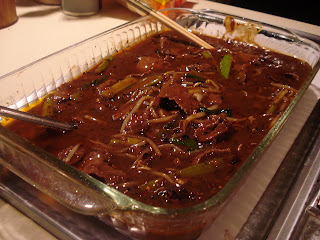 Regardless of the layer of oil, here is a the final product. I apologize for a less than stellar serving dish. The majority of the kitchen has been packed away and a pyrex pan is the best I can supply. 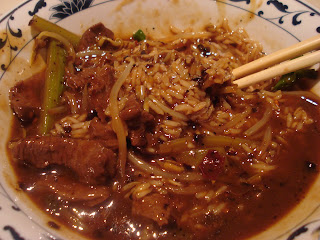 Per Dunlop’s advice, I served the beef with plenty of white rice, and I was pleased with my efforts. The flavor was bold and plentiful, but I wasn’t sweating bullets like Dunlop had promised. I suppose a galvanized tongue is to blame, but I am extremely glad that I added the bean sprouts. The celery was great crunchy contrast, but I would take bean sprouts over celery any day of the week.