Needing something for dinner on Saturday night, it occurred to me that I haven’t anything Cajun or Creole since I was in last month. An easy way to remedy that is to pull out my copy of “Commander’s Kitchen”. A tome of more than 150 recipes from the Commander’s Palace, “Commander’s Kitchen” soon presented an answer with a recipe for chicken étouffée.

Situated in the section for krewe meals, chicken étouffée is hearty dish that is really is simple to make. For me, the hardest part was quartering the chicken. 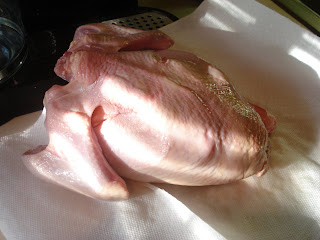 After a few swipes of the knife, my standby poulet rouge chicken was transformed into quarters. 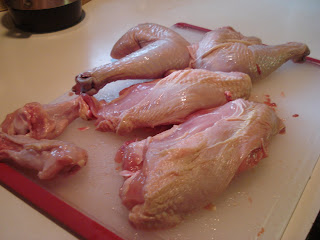 Or as close to quarters as I could manage.

When I was at school, I made a habit out of cooking lots of foods, and that presented a problem. All of my favorite recipes include a lot of chopped vegetables, and this chicken étouffée is no exception. 2 onions & 2 bell peppers both in a large dice, 2 jalapeno peppers, seeded, stemmed, and minced, and 15 cloves of garlic, peeled and thinly sliced make the vegetation in this dish.

With all the prep work done, it was time to start the ball rolling on this étouffée 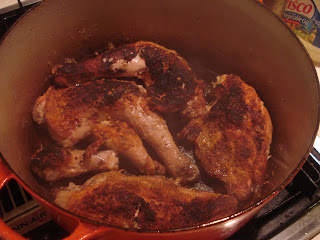 That required me to get my dependable le creseut pot and ½ cup of oil to smoking and then introduce the chicken that had been salt & peppered and lightly dusted in flour.

Once one side was browned, it was time to flip and treat the other side likewise. 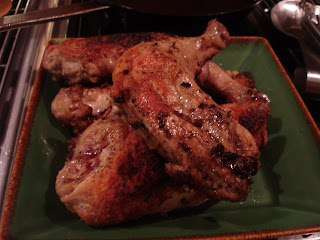 When everything has been browned, I pulled the chicken out and got the oil back to smoking. 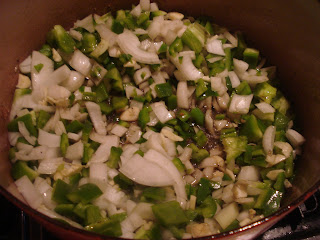 With the oil smoking, it was time to add in the whole bowl of chopped vegetables

After 12 minutes of covered cooking and the occasional stir, 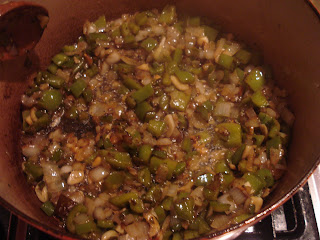 It was time to introduce the remaining flour A real trick to this dish is making sure the vegetable roux turns a dark, nutty brown without burning. It took 4-5 minutes before I was happy with the color, but when once I was satisfied, I added 2 tsps each of dried sage and thyme and some salt and pepper 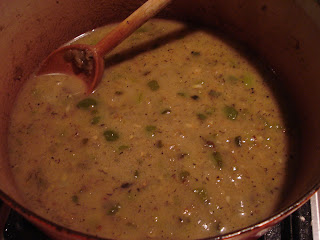 I gradually added the 3 cups of water, making sure to stir out any lumps in the roux Back into the pot 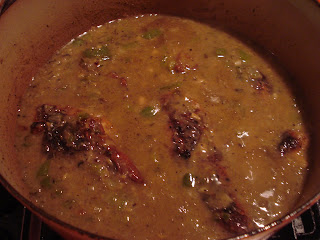 Bring everything to a boil and then tone it down to a simmer.

After about 20 minutes and the occasional stir, I checked up on the chicken. True to the recipe, the chicken was tender to the point of falling off the bone. Believe me, I realize that this doesn’t look appetizing at all. But once everything is mixed together with a little hot sauce, you won’t care how messy it looks.