Far from being my favorite restaurant in Jackson, Char is an interpretation of the classic American steakhouse. Complete with dark woods, leather booths, and a wait staff trimmed in white aprons, Char does a decent job of it. However, that Sunday night, we were only there because of a gift certificate and rumors of a closing.

Normally in a steakhouse, I would order my standard shrimp cocktail, but I’ve always been disappointed in Char’s shrimp, so I stuck to another favorite, fried crab claws. 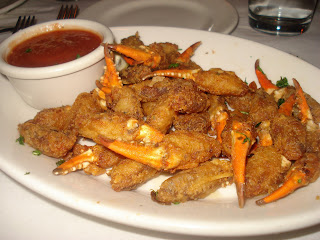 Golden brown and almost delicious, these crab claws are a nice start to a meal, even if our waitress was a little flakey.

Skipping on steaks for the evening, I elected to try a different dish. 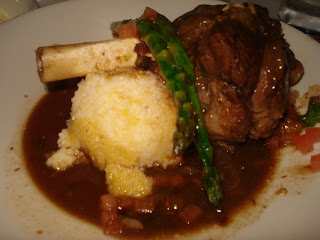 The braised lamb shank was much better than I expected. The meat was fork tender, 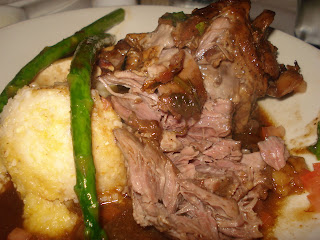 It fell off the bone without any resistance. The flavor was also very well done, nothing overshadowed the lamb flavor, a common restaurant faux pas. The grits were a nice addition to the meal, if a lacking in garlicky punch. If someone is going to serve garlic cheddar grits, I’m expecting a garlic flavored punch in the mouth, not a delicate hint of flavor that won’t offend the weak-kneed. A definite downside of the dish was the haphazardly placed asparagus. It really is as if someone in the kitchen said “this dish needs some greenery. I know! Asparagus!” No real thought in this addition and it shows.

Even amidst rumors of closing, Char is always full of patrons. However, being full is not a sign of quality. Picadilly is constantly bustling with diners, and I suppose there are people who want some cafeteria style dreck, but the food at Char is far from bad. It’s only that Char just doesn’t excite the senses. There’s nothing here that makes me say “I want to come back as soon as possible”. Every restaurant strives for those intangible qualities, Char just has more work ahead of it.


For a look at the Char burger during the Epic bacon cheeseburger quest, please click here