It happens to everyone. Your city or state may have its fair share of tourist attractions, but you never see them until someone comes to visit. For me, it took a visit from my friend Lisa before I made my way to Natchez. With over 100 registered antebellum homes, Natchez is a cultural gold mine, and one of the premier homes is Stanton Hall 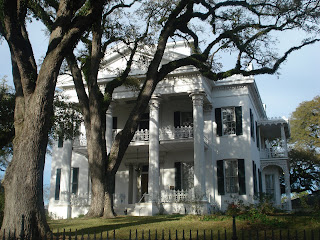 Amazing to think that this was Mr. Stanton’s seventh home.

However, before we could start any sort of tour, Lisa and I needed something for lunch. Per a number of recommendations, we decided on the Carriage House, a restaurant in the former stables/carriage house of Stanton Hall.

For being a converted carriage house, this restaurant puts many homes to shame. In keeping with the prim and proper mystique of antebellum Mississippi, the tables are set with starched linen tablecloths and a full set of silverware is at every setting. To think that people in D.C. laughed when I told them I had attended cotillion. When Lisa, hailing from Massachusetts, was flummoxed by the number of forks, it was my turn to laugh.

All cotillion and manners aside, the Carriage House starts a meal simply enough. 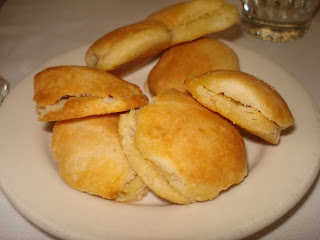 As soon as we were seated, we were served a plate of butter biscuits and jelly. 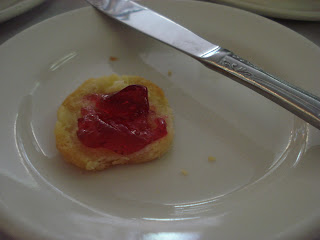 It may seem like an odd thing for lunch, but these little biscuits were addictive. We would have gone through the entire plate, if our soups hadn’t arrived. 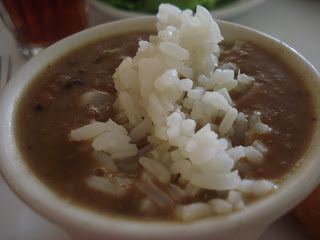 Lisa had chosen to go with the chicken gumbo, and I was this served this little cup of seafood gumbo, complete with a good sized piece of corn bread. Thankfully, this was a pretty decent example of corn bread and gumbo, and Lisa was able to get a taste of the tour Mississippi staples.

Instead of a salad with my entree, I had gone with the frozen fruit salad. 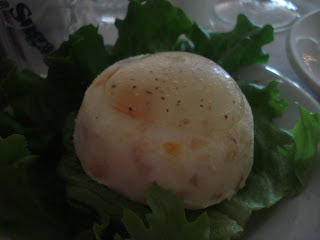 When this was put on the table, we were both stunned. I had never seen a salad like it. Doused in a poppy seed dressing, this was a chore to eat. This wasn’t really sweet, and I wouldn’t even say it was that savory, it seemed to straddle the line between the two. Regardless, I couldn’t stop eating it.

As you might have noticed, I always like to try a restaurant’s signature dish. For the Carriage House, the dishes were broiled or fried chicken livers or southern fried chicken. Hoping to rectify the fried mistake at JCT kitchen, I went with the fried chicken. 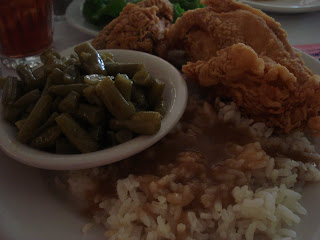 Like most southern style restaurants, the Carriage House hoped to cover up the blandness of their rice with a healthy ladle full of gravy. The green beans were a little bit better than the rice, as I could tell they had been made with a fair amount of pork for flavor. However, the real star of the dish was, of course, the fried chicken. 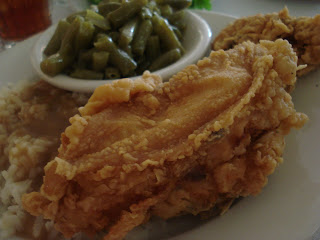 The Carriage House hadn’t tried to make their fried chicken into something it wasn’t. This wasn’t a trendy restaurant in a trendy part of Atlanta, this was fried chicken from people who know fried chicken.

Even though we were forced to endure some first day slip ups from our waitress, there were few things to complain about. The service was decent, the food was delicious, and Lisa was overwhelmed by the genuine politeness and kindness of the good people of the Carriage House. Thankfully, that carried over to most everyone in Natchez. If given the opportunity, I heartily recommend that you take a trip to Natchez, and see some true pieces of American history, and enjoy a piece of chicken while you’re there.

I thought a trip to Natchez and a nice lunch at an antebellum home would be a romantic start to Valentine's. I had been to the Carriage House 12 years ago and had very fond memories. First, the napkin placed on the table was burned at the edges. The food was buffet style. The food that wasn't dried out, was burned or had a horrible fish taste. I needed a knife to cut the brownie dessert! The waitress never refilled our tea and watched as I added the tip to ticket. The entire experience was horrible and I will never go back!

I think that this mansion is such a beauty where we can find anything at all, I am really good with all dishes that have been served in there. Buy Viagra Viagra