After searching serious eats for Mario Batali’s basic marinara recipe, I thought a Bolognese would be a nice step up. By way of serious eats user comments, I found this recipe on epicurious.com

This is Mario Batali’s recipe for Bolognese sauce as published in a 2002 issue of Gourmet. With a tasty looking ingredient list, I decided to give it a try.

* 1/4 pound pancetta or slab bacon, ground by butcher or thinly sliced and pulsed in food processor until finely chopped

I started this recipe with the pancetta. 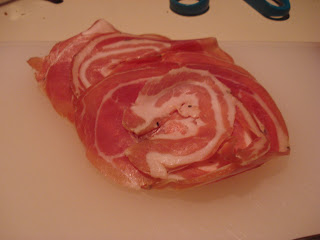 Per the recipe, I sliced it thinly 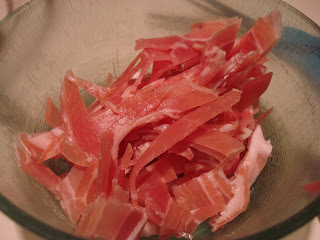 And then took it for a spin in the food processor. 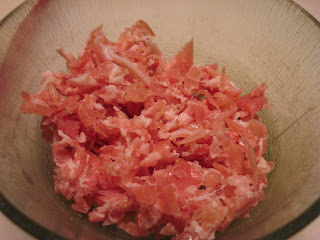 With three types of meat in the recipe, I was worried that the pancetta would be lost in the mix, especially being so finely chopped. Nevertheless, I moved forward. 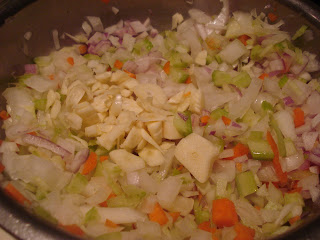 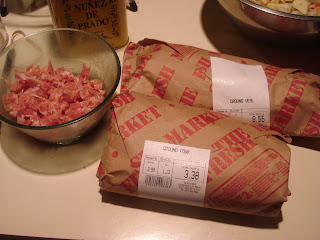 Now to the meat of the dish; I’ve got the chopped pancetta and pound each of ground veal and ground pork. 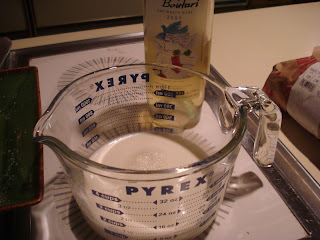 Trying to be prepared, I had a cup of milk and the wine ready to go. 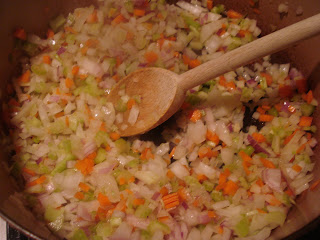 Sautéing the vegetables until softened 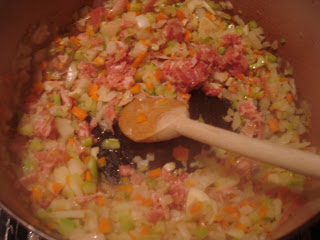 After the vegetables were nice and tender, I added the chopped pancetta. 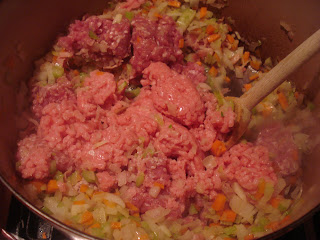 Immediately after the pancetta came the ground pork and ground veal.

When the meats were no longer lumpy and had cooked to a nice pink color, I added in the 6 oz can of tomato paste. 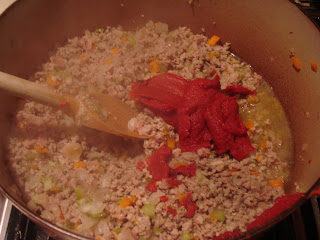 One thing that really surprised me about this dish is the amount of tomatoes. I’m accustomed to seeing Bolognese sauces that feature a little meat swimming in tomato sauce. 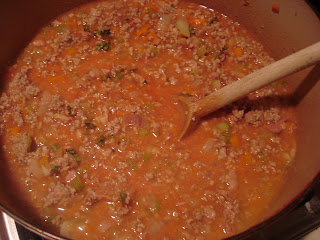 Right after the tomato paste, I added 1 cup of whole milk, 1 cup of white wine, 1 cup of water, and about a teaspoon of fresh thyme.

Once everything was in the pot, the recipe couldn’t have been simpler. All I had to do was simmer for 1 ½ hour to 2 hours until the sauce was thickened. After 1.5 hours, the sauce went from this 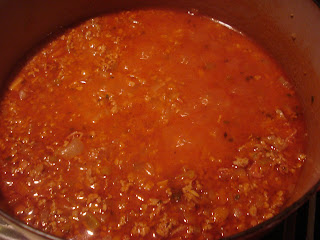 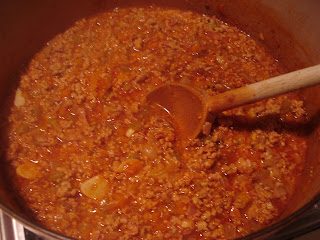 After adding the necessary salt and pepper, I found this sauce was lacking something. I decided that even with all that time spent simmering, the sauce was too watery. So, I left off the pot top and simmered it for another hour or so.


At the end of the extra hour, I took a look my project 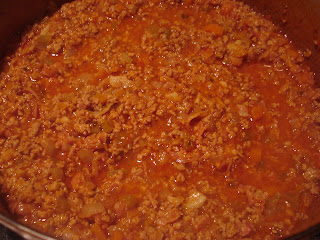 It may not look that much different, but the flavors really had condensed. It’s still not the soupy red meat sauce that is Bolognese in the , instead this was a much more subtle sauce that really let the flavors of the meats shine through. Unfortunately, as much as I could taste the veal, the pancetta had virtually disappeared from the sauce. Disappearing pancetta or not, this was a delicious sauce that was well worth the time and effort

Email ThisBlogThis!Share to TwitterShare to FacebookShare to Pinterest
Labels: Cooking at Home, cooking from the web, Italian, pasta