Being out of Jackson and in the mood for some dumplings, I knew there was one place to go: Oriental Pearl. 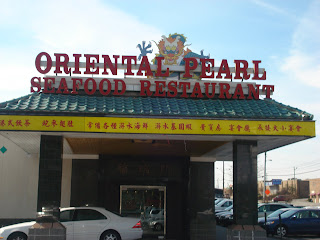 A not very well kept secret of Buford Highway, Oriental Pearl is consistently rated as the best dim sum in Atlanta. Unfortunately, I was there on a Tuesday and was not going to receive the full dim sum treatment.

Weekend or no, Oriental Pearl serves dim sum seven days a week. After being shown to my table, the steamer carts headed my way. 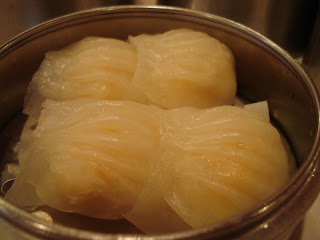 As usual, my first dish was har gao. These examples are average at best, but still a welcome site, especially when dipped in chili sauce. 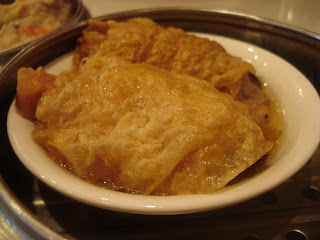 Seen juk guen (bean curd rolls) were the second dish from the steamer cart. I was surprised to find that these were not stuffed with shrimp or group pork but rather an egg roll like stuffing. The mixture included ground pork, shredded cabbage, julienned shiitake mushrooms, and bamboo shoots. Always a little greasy, and apt to fall apart, but nevertheless delicious. 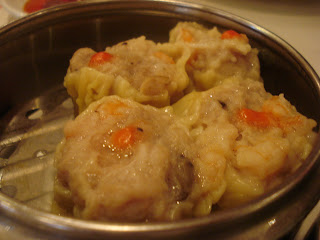 The third dish was a steamer of pork shui mai. Filled with minced pork and a few shiitake mushrooms, these particular shui mai had been on the steamer cart for a little too long. 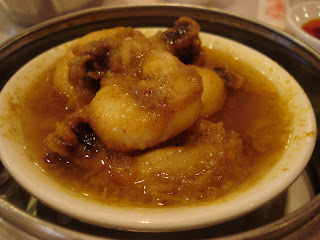 These little squids were a new dish to me. They seemed to have been braised in a curry sauce, and they were quite tasty. A nice, slightly chewy mouthful. 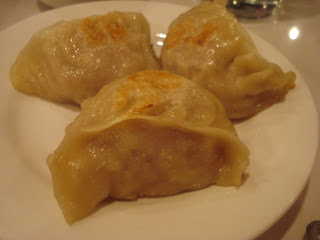 Pan fried pork dumplings were on my menu as well. I’m used to a dumpling filled with ground pork, and these were not. Filled with shredded pork, these dumplings provided a disappointing texture, I’ll make sure to avoid them next time. 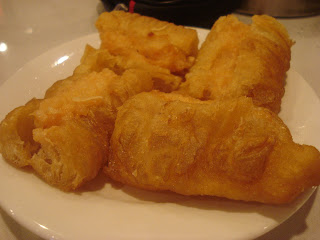 Another new dish to me, these rolls were nothing more than a heavy dough filled with a small amount of minced shrimp. Besides having a terrible ratio of dough to filling, these rolls were greasy and too hard to bite into. 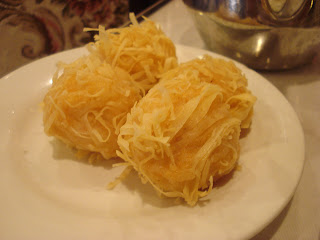 Odd looking zha ha gao were near the end of the meal. Usually these fried shrimp balls create a huge mess with the wonton strips littering the table, but these manicured examples were easy to handle and relatively tidy. All tidiness aside, these shrimp balls carried a great flavor and were very juicy. 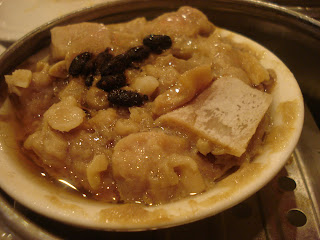 Pai guat (pork spareribs) were the next to last dish and these weren’t the best examples of the dish. They had formed into a cumbersome mass and provided quite a challenge. Like the shui mai, these had been on the steamer cart for too long, and the flavors and textures suffered. 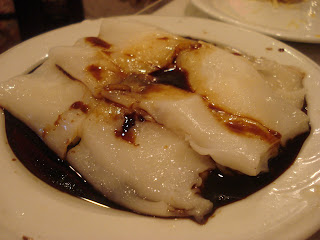 Ha cheung fun or rice noodles with shrimp was the final offering of the day. Swimming in sweet soy sauce, these noodles are a guaranteed way to stain your shirt. Stains or no, these were a decent way to end the meal.

Despite the shortcomings of the weekday dim sum, I feel this review doesn’t show the true quality of Oriental Pearl. You have to be there on a weekend to see their best work. I was just happy to have some dim sum again, even if some of it was pretty half assed.

for my second review of Oriental Pearl, please click here