Much like the detestable "fusion", The term gastropub has been exhausted, anyone can brew up some swill and then call themselves a gastropub. Holeman & Finch is not one of those schlubs, these people have the chutzpah to back it up.

One major downside to Holeman & Finch is that they do not take reservations, but we were lucky enough to walk right in and have a seat at the communal table. After the ordering spree, we got Aaron’s dish first. 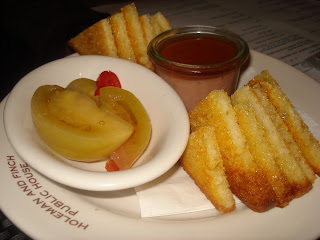 A pot of chicken liver pate with jenny jack honey, apple cider jelly, and green tomato pickle may not sound too appetizing, but this dish was a revelation. 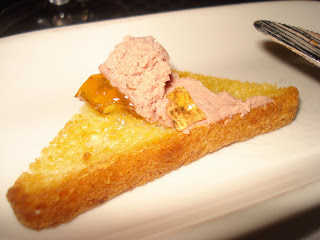 I’ll admit I had never really given chicken livers a chance, but this pate was smooth and it looks so tempting. Thankfully looks were not deceiving and the pot of pate was soon emptied.

Next up was my favorite dish, the plate of house salumi, charcuterie, and sausage. 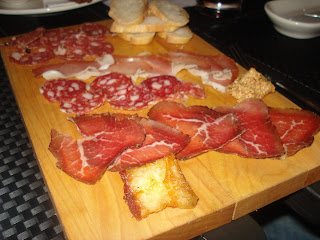 The problem with writing about these afterwards is correctly identifying each meat. Working from the front we have brion, which Aaron and I split when no one was looking. Much like the pate, this was a stellar item. Moist, unbelievably juicy, and too small, this seemed to be a tiny piece of crispy pork belly. Second is the house breseola, a cured beef tenderloin, a nice piece but lost amongst the others. Third is the toscano salami, a classic cured pork that is generally made with garlic and wine, another fine product by Holeman & Finch. Fourth from the front is the house lonzino, a pork equivalent of the breseola. Lonzino is a great way for the quality of the pork to shine through, and this example glows. Last on the platter is Nuo-salami, a type that I’m unfamiliar with, and it really didn’t stick out from the rest. One thing that did stick out was the house mustard. Like any good mustard, this was whole grain, and delicious pungent. It went a long way to amp up some of the lesser cured meats.

In much the same vein of cured meats, we were soon presented our plater of terrines. 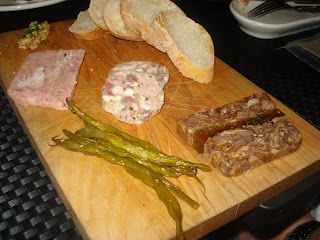 Starting from the top of the board, we have the pork ciccoli which was was a little less than memorable and bears an unsettling resemblance to a slice of spam. In the middle is the H&F souse, or headcheese, another odd first for me. Very interesting texture, dense and a little gelatinous. The real hurdle to eating these sorts of things is the burden of knowledge. When you know how they make headcheese, or what kidneys actually do, you’re a little more reluctant to try them. Still, no one likes a boring eater. Lastly was the oxtail with cilantro gelee, and if there was any cilantro, it was a miniscule amount. This was a slice of strong, beefy flavors, and a real treat.

Continuing with our smorgasbord, we have the cornmeal fried oysters. 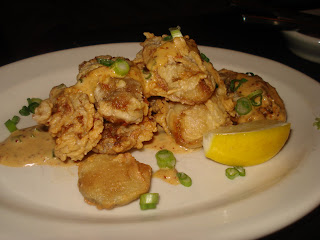 Nothing but a beautiful, crunchy exterior, and the sweet oyster inside. I hesitate to enjoy fried oysters, if only because they’re so often gummy and tasteless, but at Holeman & Finch, that was far from the case. 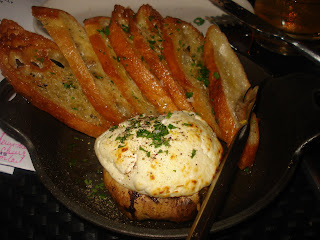 Why stop there when you can have a a bulb of roasted garlic, topped with chevre and served with buttery crostini? The only real downfall to this dish was that it was damn hard trying to find the cloves of garlic underneath all that cheese.

If you think we were being too healthy with the garlic, never fear! We also had an order of the berkshire pork belly over collards and chow chow. 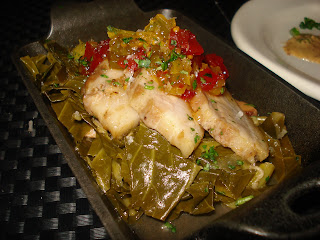 As usual, Holeman & Finch know their way around a piece of pork, as this was an unctuous dish. A surprising highlight of the dish was the locally grown collard greens. Imbibed with pork flavor, these tender greens were more than just a pedestal for the pork belly. 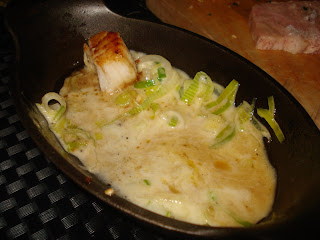 The scallops were a rare miss for H&F. Too much salt ruined whatever chances this poor bivalve had.

Who doesn’t love a plate of glands? 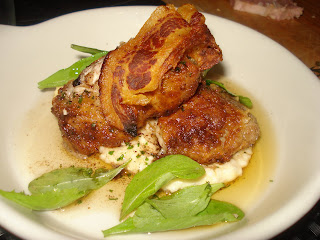 We were nearing the end, but that doesn’t mean the fun stopped, not when you can have a plate of roasted veal sweetbreads over grits and topped with a piece of crunchy guanciale. The sweetbreads were nearly as creamy as the grits, and everyone quickly devoured this tiny plate. I can almost kick myself for waiting so long to try sweetbreads.

Due to my incessant whining, the butcher at H&F was kind enough to give us another salumi plate. 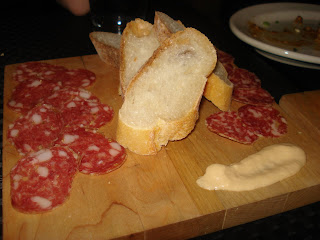 Fresh from the curing room, on the left is recette de lyon and on the right is a classic finnochiona. Both were fine examples of a cured meat, and the finnochiona, in particular, had a fine, yet subtle taste of fennel. All in all, a great way to end the savory part of the meal.

Like many pursuits in life, a perfect meal is nearly unobtainable if not an outright fallacy. As big a disappointment the oysters had been, the lack of our favorite dessert was a crushing blow. Instead of a moist and delicious brownie doused in crème fraîche, we tried their brand new dessert. 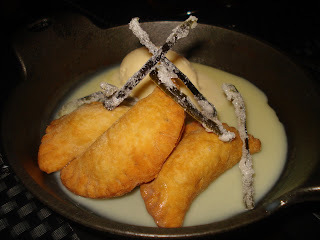 This odd looking dish is guava empanadas with corn ice cream, jalapeno white chocolate ganache and strips of candied poblano peppers. I can appreciate the idea of a savory ice cream, and the candied poblano were a fantastic idea, but overall, I was not impressed with this dessert.

Even with a few stumbles along the way, a meal at Holeman & Finch is a gastronomic roller coaster ride. If one arrives with an open mind and empty stomach, you can quickly see why Holeman & Finch won Atlanta restaurant of the year in 2008. I just know that I’m going to have to get some more of that pate.