It’s Friday night and I’m excited. We’re on the way to Cochon on 930 Tchopitoulas, a restaurant that I’ve been reading about for nearly a year. Owned and operated by Donald Link and Stephen Stryjewski, Cochon is supposed to celebrate the delicacy that is pork. I was more than happy to try all that they had to offer.

At first, I was disappointed in Cochon, the waitstaff was less than attentive and we were seated next to a large group that featured a duet of braying jackasses. However, our sour looks did not go unnoticed as the hostess soon offered us another table. Even though we declined, the wait staff picked up the pace immediately.

We started out with a wide range of all the small plates and boucherie that Cochon had to offer. First were the wood-fired oyster roast. 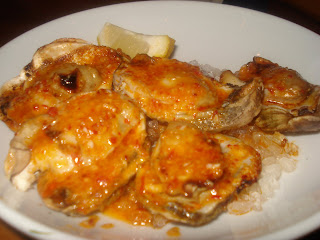 These gulf beauties were roasted with a spicy pepper sauce, and they were a nice little treat. I’ve never had Gulf oysters as good as the ones on this trip Nola. 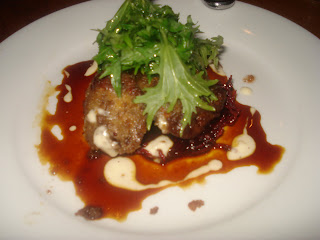 I realize some people might have a little trepidation towards the idea of pork cheeks, but if you’ve ever tried guanciale, then you’ll appreciate the fine meat that is presented here. The cheeks were little nuggets of delicious, moist meat that were fork tender. To be honest, I can remember every flavor of the pork cheek, but the cornbread cake & mustard cream have faded into obscurity.

Next up, a Louisiana favorite, fried boudin with pickled peppers. 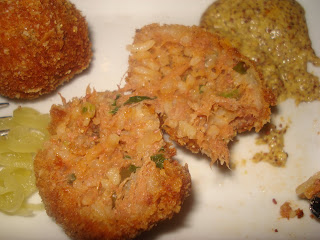 Like andouille, boudin is a dish that is frequently bastardized outside the state of Louisiana, but these boudin balls were a fine specimen. They avoided the frequent trap of too much rice and not enough meat, these were meaty spheres, and the house made mustard was the perfect accompaniment.

After the stellar boudin balls and pork cheeks, we tried the andouille & sweet potato pie with apple & greens slaw. 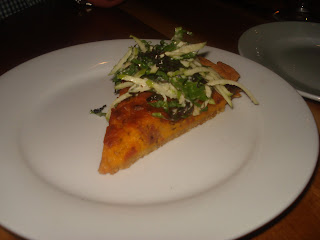 I’m usually the first to avoid sweet potatoes. They overwhelm any other flavors and generally ruin every dish, but this was an exception to the rule. The andouille was the shining star here. I have instant respect for anyone that makes their own andouille, and Cochon features a delicious andouille.

Strange as it sounds, with all that food, we still ordered entrees. Mine was first up: Louisiana cochon with turnips, cabbage, and cracklins. 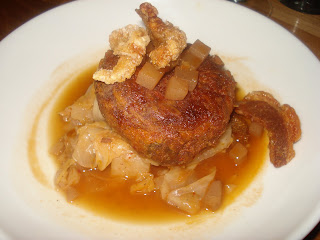 This dish is another example of why I’ll go back to cochon. Not because it was delicious, it was, but because this first example was dry and mealy. The waiter was quick to notice my displeasure and within five minutes I had a new plate in front of me. 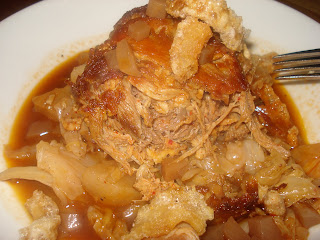 That, my friends, is a juicy, tender cut of meat. If I were a pig, I’d be happy to be served this way. The cracklins were also a nice treat, as I had a double order. 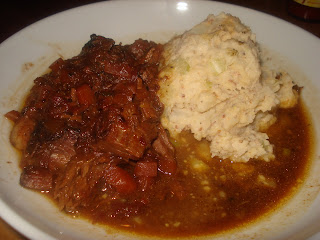 I have a long way to go before I can cook a brisket this smoky and tender. Even though he deviated from our tour du porc, this brisket can justify the deviation.

My mother decided to ignore our tour du porc as well, and had another appetizer. 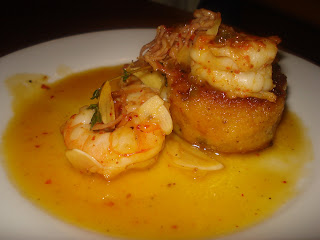 Of course, my mother would welcome herself back into the fold with her second appetizer as an entrée. 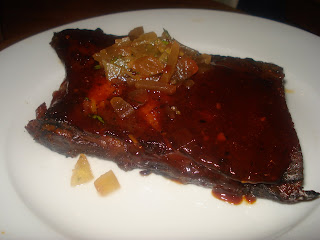 Spicy grilled pork ribs with watermelon pickles, an interesting choice to say the least. When I think of New Orleans, ribs are far from my mind, but these are not a bad example of the dish. I admire the creativity with the spicy sauce and watermelon pickles, but I’ll take a smoky dry rub rib any day of the week.

A definite plus for Cochon is their relatively extensive bourbon list. I’m always partial to a place that has my bourbon of choice. For dessert, I decided to give their Bourbon flight a try. 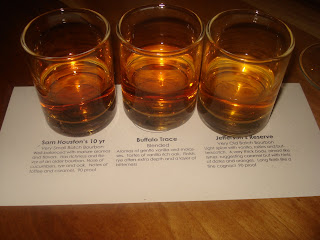 Cochon has really become the culinary talk of the town in recent months, and there is good reason for it. It’s not often that you can sample so many parts of the pig in so many different ways. I’m chomping at the bit to Cochon another go.

I am so excited to see all this wonderful plates, I really like to flavor one by one just to see which is better. Buy Viagra Viagra