After reading her memoir “Sichuan Pepper and Shark’s Fin Soup”, I knew that I had to get my hands on Fuschia Dunlop’s cookbooks. At the end of one of the chapters in “Sichuan Pepper” there was the recipe for Mao Zedong’s favorite dish: red braised pork belly. Thankfully that recipe was included in Dunlop’s second cookbook, “Revolutionary Chinese Cookbook: Recipes from the ”.

I knew this recipe would be a great use for the pork belly I had picked up at Star Provisions in . 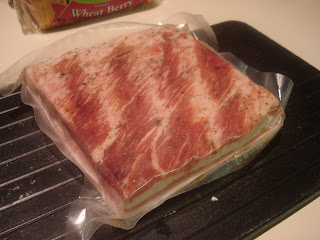 Having set the belly to defrost, I started on getting the rest of the ingredients ready and set up.

I suppose the simplicity of this dish reflects Mao’s humble beginnings. 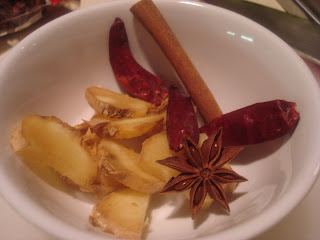 These are all the spices for the dish: a small piece of cassia, three dried chilies, one star anise, and an inch of ginger (sliced, skin on)

Once the pork had fully defrosted, I followed Dunlop’s recipe and dropped the pork into a pot of boiling water and simmered for 4-5 minutes. 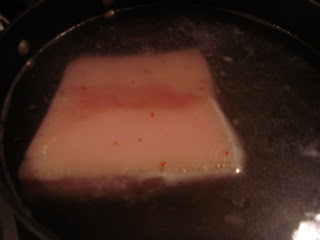 Nothing quite as exciting as seeing a big piece of fatty pork quietly simmer. Luckily, we have a tv in the kitchen.

After retrieving the belly from the pot of water, I let it rest on the cutting board. 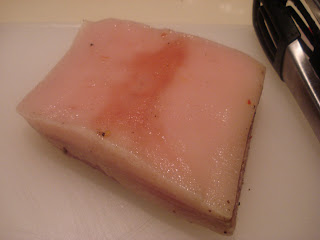 I know its pork belly, but there seems to be a suspicious lack of meat in this cut of meat. 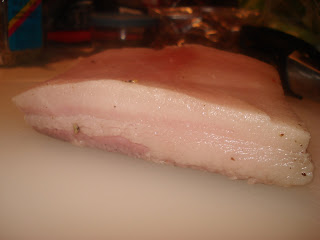 With the pork having a chance to rest, I took my knife to the pork belly. 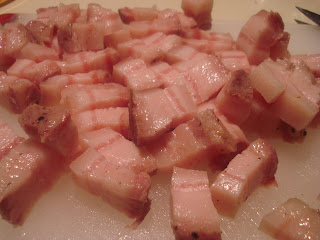 Next, I took 2 tablespoons of peanut oil and white sugar. 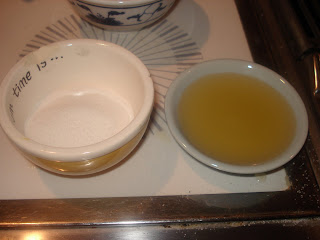 Put them in a cold wok, and started them over a low heat. 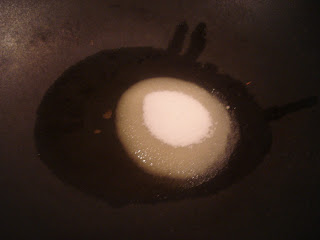 The idea is to melt the sugar until it turns a rich, caramel color. I know it’s a bad picture, but you can see how dark the sugar can get. 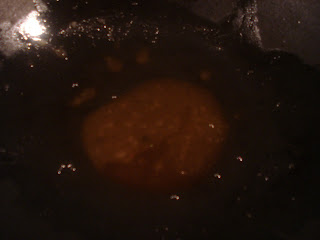 Now we can really get going with the dish. 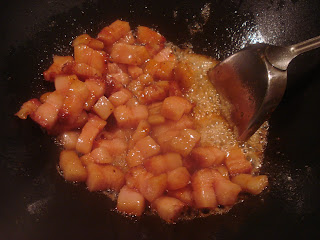 I added the pork into the wok along with a tablespoon of Shaoxing cooking wine. You can already see how the dish gets the name of red braised pork. 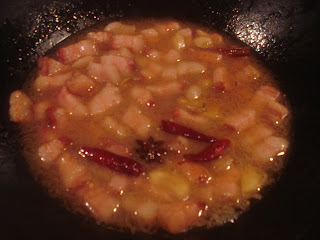 Add the spices, bring to a boil and then turn to a simmer for 40-50 minutes.

With a little time and heat, the pork went from this: 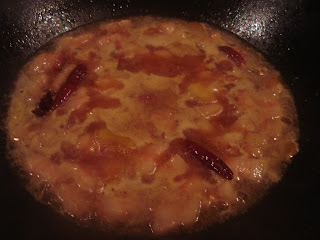 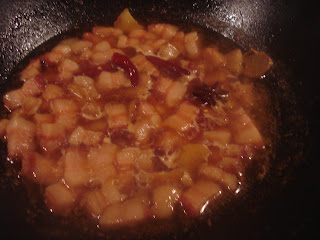 Ending up with this 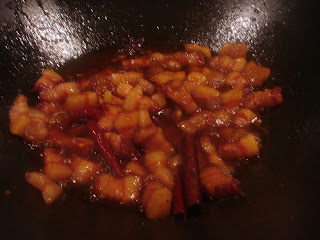 Per Fuchsia’s instructions, I had turned up the heat the last 5-10 minutes, just to thicken up the sauce. 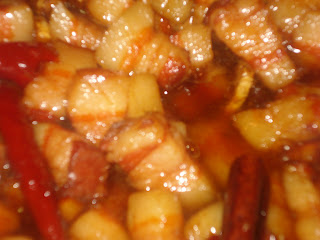 I tried the dish, and I had no idea what to expect. It was a delightfully sweet dish that had the slightest chili undertone. The smell was the real dealmaker. The entire house smelled like a Chinese kitchen, and I love that smell.

Before serving, I did add a little soy sauce, just to cut through the sweetness. I’m not sure if this is a dish I could enjoy on a regular basis, much less the twice daily dose that Mao enjoyed. I see how the Chairman’s doctors encouraged him to cut down on the red braised pork, but I suppose you must have a high fat meal when you’re starving millions of your own people.

Hey, I made the same recipe too - it's amazing how different one recipe can turn out! Have a look at my photo's at http://dumplingdesignz.blogspot.com for comparison. It looks like my pork belly had a lot more meat than yours so don't be put off by the end result.