Once again, I’ve found myself back in Atlanta. I think the reason for this visit was delivering a late Christmas gift, but my motives aren’t important. The important matter at hand was dinner, and for reasons that escape me, we all decided to venture into midtown for Greek.

The we for this meal included my sister, her boyfriend Aaron, and Aaron’s friend Adam. At 9:30, pretty late for a Monday night, we pulled into Avra. 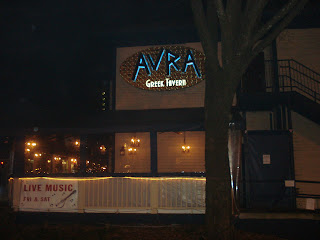 We were unprepared for the meal that awaited us, much less our exuberant waiter.

Like any good meal, we needed to start off with a wine. After a few minutes of Aaron and I hemming and hawing over the wine list, the waiter made a few suggestions and then delivered a couple of samples. 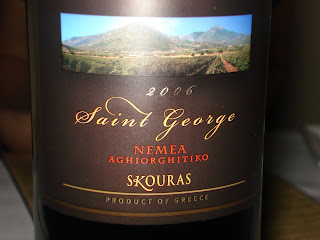 We decided on the Saint George, nothing too memorable.

I’m always disappointed when a Greek restaurant doesn’t serve saganaki. It’s a simple dish, little more than broiled cheese served with pita bread. The kicker is that the cheese is doused in ouzo and lit on fire tableside. 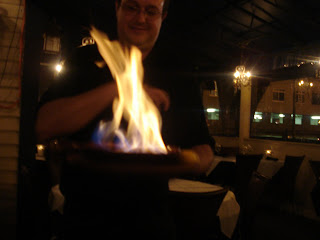 When it comes to saganaki, with three choices on their menu, Avra is miles ahead of everyone else. We decided on the halloumi saganaki, a cow’s milk variety. 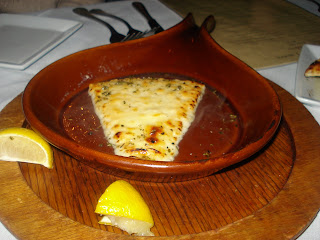 The saganaki was a fine dish, and it disappeared in seconds.

Being in midtown, Avra is a slice of the local culture, and our waiter was the perfect example. Midtown trends aside, he was a good salesman and sold us on the sampler plate of house dips. 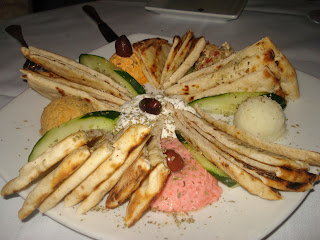 With a puree of chick peas with sesame & lemon (revithosalata), tzatziki, a puree of potato, garlic, and olive oil (skordalia), feta pureed with roasted red peppers (htipiti), and greek caviar and potato mousse (taramasalata), this dish was great for our little group. However, there were a number of downsides, the first being a lack of sufficient pita slices. Maybe they were expecting every dip to be done in 6 or 7 bites, I’m not sure. Some of the dips were also disappointing, but the house tzatiki and greek hummus (revithosalata) were delicious.

Knowing that we probably wouldn’t make it back to Avra anytime, we decided to load up on a variety of meze instead of entrees. First meze on the block was the stuffed pepper. 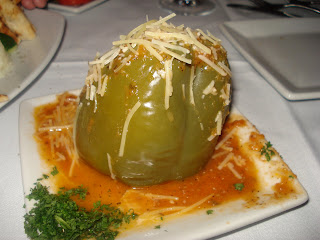 You can’t fault Avra for an empty pepper. 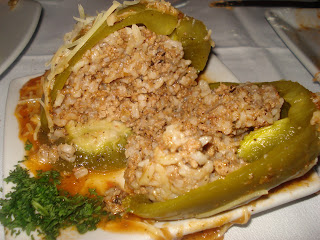 What I can fault them for is empty flavor. Sure there was plenty of rice, but the beef was nonexistent and the rice had stolen every bit of seasoning, and hid it very well. After a few bites of the lackluster pepper, I decided to move onto the next victim. 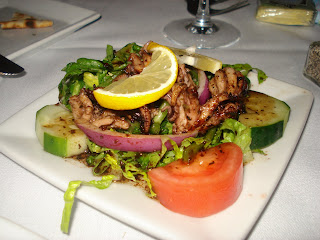 First braised then chargrilled, these little octopi come to the table splashed with some Greek vinaigrette, and they were a standout of the meal. I was expecting them to be chewy to a fault, but they had a delightful texture and were seasoned well. 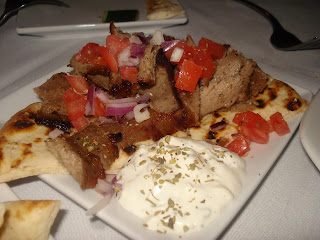 Now we begin another slippery slope downward. The micro gyro seems to be a misnomer. Aside from the small slices of gyro meat, I can’t tell what was small about it. The lamb flavor was there, but it was a little too reminiscent of sysco gyro meat. 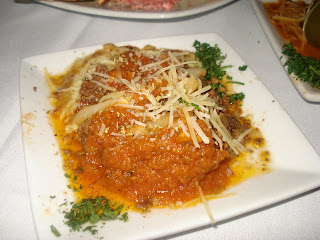 Another peak! The moussaka, layers of potato, eggplant, seasoned ground beef that has been baked with a bechamel, was a great dish, although completely covered in marinara sauce. Regardless of the red sauce, the flavors shone through on this dish. 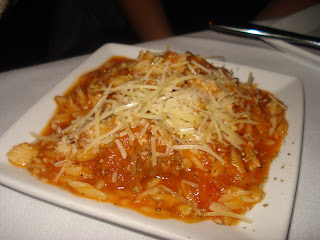 This meal was a roller coaster, as soon as we had climbed with the moussaka, we tumbled back to earth with the lamb gouvetsi. Assured by our waiter this would be great to share, we received a plate of orzo in watery red sauce. Despite our best efforts, no lamb could be found. 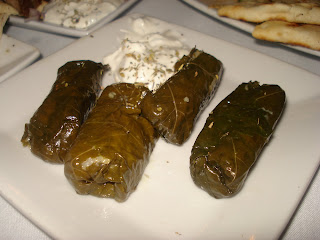 Like the missing lamb of the gouvetsi, these dolmades were missing something as well, flavor. Even with the great tzatiki, these rollups of rice were as plain as a piece of wet cardboard, and had about the same texture.

In retrospect, I’m not sure what I was thinking, but when our waiter told us the kitchen would soon be closing, I ordered a lamb kabob entree. 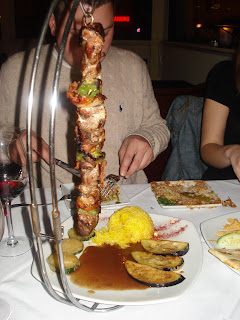 The first thing you notice (aside from Aaron and his “fancy” sweater) is that this lamb kabob is a huge mess, just waiting to happen. We quickly remedied that and had everything off the skewer and onto the plate. 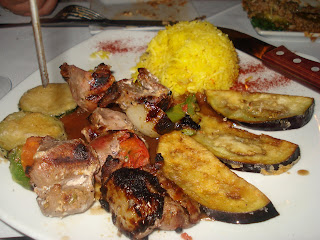 It’s a shame that any lamb has to end up at Avra, because like every other lamb dish, this was severely lacking. One upside is that unilke the gouvetsi, we could actually find these pieces of lamb. The real stars of this plate were the fried eggplant and squash. They seemed to be in a tempura style batter, and they were moist and honestly one of the best parts of the meal.

What would be a Greek meal without some ouzo? 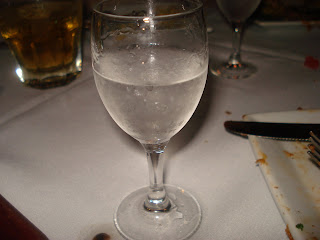 Fortunately, we didn’t pay for this little after dinner beverage. Our colorful waiter had taken a real liking to Aaron and his sweater, and was more than happy to send us off with the free drinks.

Despite our enthusiastic waiter, Avra is far from my list of Atlanta repeats. I will admit that some of the more traditional Greek fare was very well done, but the group consensus was that this restaurant needs to revisit their recipes and add some more seasoning or at least some more meat to the dishes.

Leave my sweater alone. An old Incan woman [that works for Ralph Lauren] spent half of her life weaving it for me.