I needed something different for lunch. I was back in Atlanta after delivering my sister to her apartment, and I needed lunch before making my way to I-20. After driving down Peachtree, I saw Ted’s Montana Grill and buffalo sounded pretty good.

Once I walked in, I was surrounded by the familiar sights, sounds, and smells of Ted’s. The restaurant is a mixture of a diner and steakhouse, with white tile floors and dark leather booths lining the wall.

As soon as I was seated, my waiter brought me a bowl of pickle slices. 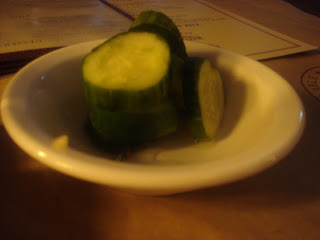 After taking a bite, I was delighted to find these were half-sours. Not completely pickled, half-sours have more spice to them than regular pickles. I quickly polished off the small bowl. 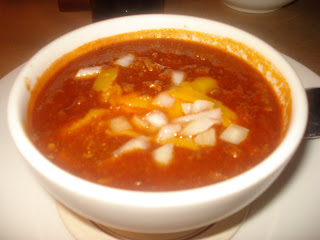 Being a cool day outside, I knew something warm was in order, and even though I’m often disappointed, I decided to give a Ted’s buffalo chili a try. This obviously wasn’t a multi-day chili, but I ignored that in favor of the delicious buffalo and flavorful chili powder.

All chili and pickles aside, Ted’s Montana grill known for their buffalo burgers, so I decided to have one for myself. 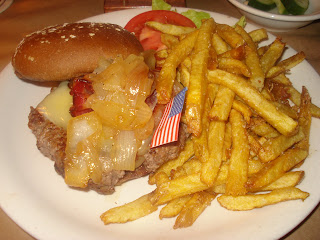 This is the S.O.B. burger, named so because it has Swiss, grilled onions, and bacon.

It’s not the best burger in the world, and it definitely isn’t the greasy spoon style that people rave about, but buffalo makes a fine burger. All of the flavor of a beef burger, with half the fat, granted I made up for that with cheese and bacon.

Ted’s Montana Grill really isn’t something that you should go out of your way for, but it is a nice break from the mundane. I can’t decide what they are trying to be, dinner or steak house? Sure they have burgers and blue plate specials, but they also try to show off their steaks. Regardless of their intentions, Ted’s Montana Grill is a damn fine burger.