Not Bad For A Goy Part 2 - Making Latkes

The only person I can blame is Marsha Rose Davis, family friend and owner of Obbie’s Cakes and Chocolates. Last summer she taught me how to make latkes, and when my cousins were in town last Christmas, I decided to surprise them and make some latkes. Needless to say they were a hit. When my cousins from Houston came this Christmas, they demanded that we make those delicious little potato pancakes again, and who was I to argue? 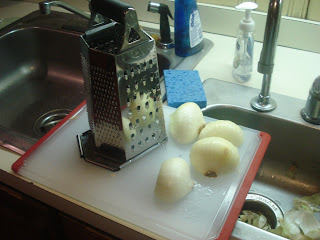 What’s the best way to put your cousins to work? Make them grate onions and potatoes. I know the recipe calls for one onion, but these are two small ones, so it all evens out. 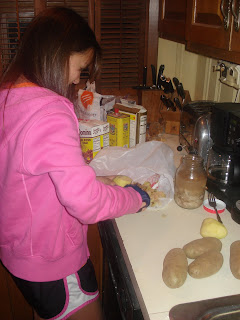 Please take note of the jar of oysters on the counter. Isn’t it just deliciously kosher?

After peeling, I got Jaime to start grating potatoes. 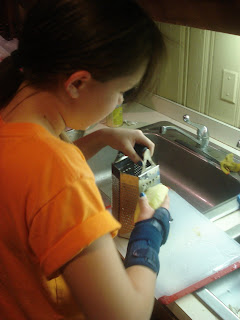 I know it seems like I didn’t do any work, but believe me, my cousin Adam and I did the majority of the potato work. 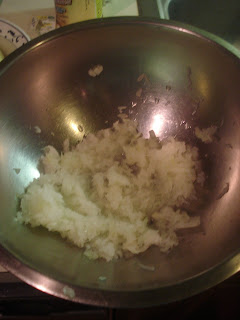 It’s not too attractive, but that’s a bowl of grated onions. 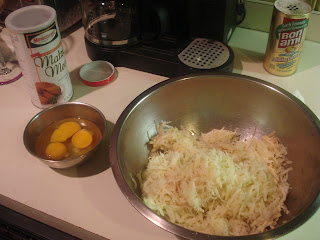 I didn’t take a picture of that step. 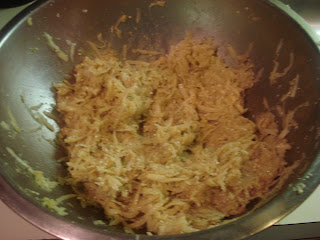 Instead I skipped right along to the added of eggs, matzo meal and salt & pepper. People might be a little wary of tasting a mixture of raw potato and eggs, but it’s the only way to know how much salt and pepper to add. 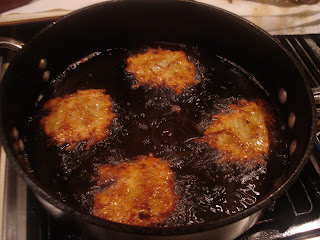 They look pretty good don’t they? 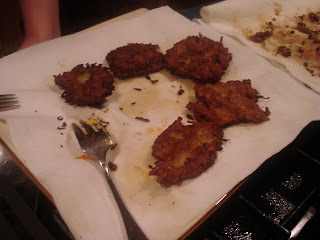 Here’s the finished product, and they went like hot cakes. These were made on December 23rd, which happened to be the fourth night of Hanukah, and even though latkes are a Hanukah tradition, I believe they have become a Christmas tradition for the Dunaway and Yeates family.

Email ThisBlogThis!Share to TwitterShare to FacebookShare to Pinterest
Labels: Cooking at Home, Jewish