A few months ago I decided to whip up a review of a little Jackson secret: shabu shabu from Little Tokyo. While I love shabu shabu, I figure it’s high time I talk about their sushi.

On new year’s eve, I thought I should end the year eating well, and so I met my buddy Joseph at Little Tokyo for our last meal of 2008. Joseph and I have been on many culinary adventures together, but this is the first time he got to be a part of all that is the Cynical cook. So with all that in mind, we pressed on.

Little Tokyo does tofu two ways, age tofu and sansei tofu, this is the latter. 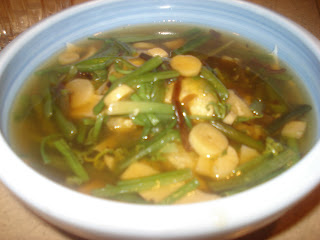 It’s simple dish, just firm tofu that has been tempura fried and then placed in broth. What separates the age from the sansei is the addition of vegetables. Slices of bamboo shoots, water chestnuts and green onions provide a crunchy contrast to the softness of the tofu.

You can’t just have one appetizer, especially when tofu is involved, so next up was the shiso hasame age. 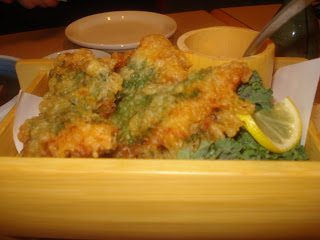 In this dish, shrimp paste is wrapped in Japanese mint leaf and tempura fried to perfection. What really completes this dish is the little bamboo container of salt, but not just ordinary salt, green tea salt. The flavored salt does a great job of bringing out the flavors of the shrimp and the subtle mint leaves.

In the last review of Little Tokyo, I wrote about the fried gyoza. 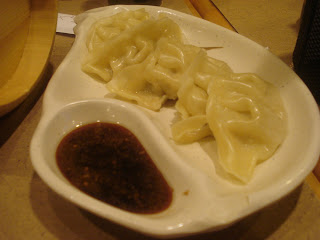 For good measure, here is the steamed version of the pork gyoza. They’re just as good as the fried, but healthier. 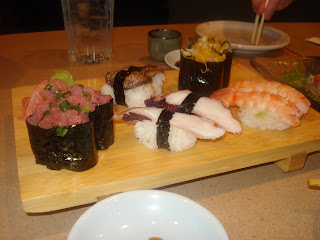 Working from left to right, we have the green onion tuna, shitake mushroom, octopus, abalone, and cooked shrimp. The green onion tuna was Joseph’s choice, and while the green onion did provide a nice flavor to the tuna, it was in the texture. I suppose that is a pitfall of having chopped tuna instead of sliced. Either way, I’m not really a fan of tuna and probably wouldn’t order this on my own.

I did order the shitakes, and I think they’re nice addition to any plate. Served nigiri style, these mushrooms are actually broiled with a creamy sauce on top. I can never figure out what the sauce is, it’s just so off beat, yet perfectly in sync with the strong flavor of the shitake.

The octopus nigiri, as long as it’s fresh, it’s good, not much else to say really.

Little Tokyo has a habit of preparing things in an odd way, case in point: the abalone nigiri. Served gunkan (battleship) style and dressed with roe, this mollusk, is quite tasty, but I’ve never seen it served like this anywhere else.

Much like the octopus nigiri, the cooked shrimp nigiri is fresh, nicely cooked and quite benign. There’s not much to separate the average from excellent in this dish, but you know when you get a bad one.

Now to the second platter, 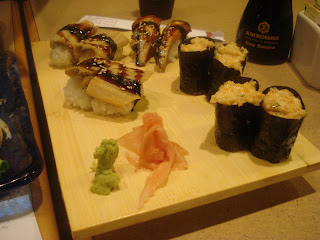 Here we have sea eel on the left, freshwater eel on the top and two orders of scallops.

The sea eel was new to me. I usually order the freshwater eel which is twice baked and then drizzled with a thick soy based sauce that is aptly named “eel sauce” The freshwater eel has a buttery flesh with lightly charred edges, a great piece of nigiri. The sea eel is another story. It has a distinctive salty taste and unlike the crispy edges of the freshwater, these edges taste like cardboard. I have the distinct feeling this is a salted piece of meat that has been reconstituted.

Like the previously mentioned abalone, scallops at Little Tokyo are delicious, yet oddly prepared. Instead of a whole scallop done nigiri style, the scallop is chopped and baked in a cream sauce. The whole thing is served gunkan style, and really is superb

We really overboard with the amount of sushi, but I want the readers to know that we made this sacrifice for you. 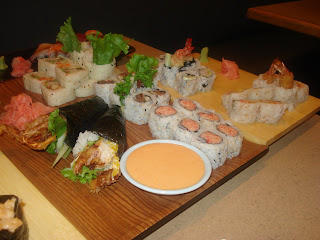 Let’s start front and center. First pictured is two soft shell crab hand rolls. I know what you’re thinking, it’s not soft shell season. That may be true, but these are fine hand rolls. Half of a crab is tempura fried and then wrapped with cucumber and lettuce, and is actually a little cumbersome to eat. Once you figure out how to best eat this roll, it’s smooth, delicious sailing.

Behind the hand rolls is an order of the cowboy roll. The idea behind this roll is that Korean bbq beef is wrapped with cucumber, lettuce and red bell pepper in a roll. The delivery does lack some punch. While pretty good, the beef lacks the flavor of a full on bulgogi.

Immediately behind the cowboy roll is the oyster roll, and I advise you to avoid this. What should be a delicious oyster is lot in a sea of wrapping material. It all tastes like mush. The oyster roll is a rare failing mark for Little Tokyo.

Last on the platter, and directly to the right of the soft shell crab hand rolls is an order of the dynamite roll. If you asked most people, they would have no idea what is in a dynamite roll. It’s actually a difficult question to answer, as every chef has a different interpretation of the roll. I believe that the dynamite roll in question is made up of a mixture of chopped crab and shrimp that is doused in a mayonnaise. Little Tokyo dynamite rolls are often a crowd favorite, and I believe the secret lies in the mayo. Dynamite mayos are often flavored with the forbidden ingredient, msg. All cancer concerns aside, the dynamite roll is a great choice.

Only two more plates to go! 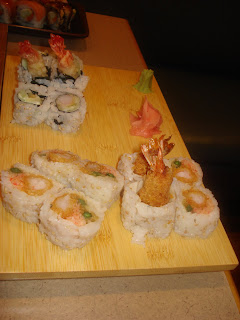 This plate features two takes on the same idea. In the foreground is a shrimp Kodiak roll, and in the background, shrimp tempura rolls. Under closer examination, we see the tempura roll features a lightly battered shrimp with cucumber and light cream sauce. The Kodiak roll is a heavily battered and slightly greasy piece of shrimp that is wrapped with green bean and what looks like dynamite roll filling. The two are both fine choices, but if I had to pick, I would go with the shrimp tempura roll. It’s lighter, and more traditional, though the Kodiak is fine way to introduce someone to sushi.

Last but most definitely not least is the toro. 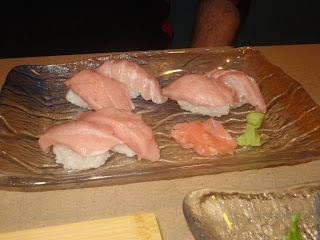 Toro is the fatty belly of the tuna, and I do mean fatty. You can’t help but see the marbling when you look at the nigiri. It has a much more subtle & delicate flavor than other tuna rolls. Toro is a real treat, and I don’t just say that because of the taste. At $10.50 an order, you’ll go broke eating too much toro.

In retrospect that is quite a lot of sushi, and I didn’t even mention everything that was ordered. I left out the rainbow roll simply because I didn’t any room to try it. In fact there are many more items on the sushi menu I have yet to taste. There are 46 items on just one of Little Tokyo’s sushi menus.

Bounty of choices aside, I think this small selection of sushi more than proves that Little Tokyo can pass muster with their sushi. Sure there are some definite misses, the sea eel in particular, but the quality of the food and the service is hard to beat. I only lament that I now have to review the teppanyaki side of Little Tokyo. I hate burned soy sauce.

For a look at shabu shabu at Little Tokyo, please click here

ooo... i am a tofu super fan! sigh. i want the mapo tofu soooooo badly right now. with rice.

Here I bought a sauce pack so as to skip all the seasonings! and i will try this friday after work.
http://yummiexpress.freetzi.com