After two days of heavy meals and heavy shopping, we needed something simple for dinner. Thankfully, I knew of just the place: Kenny & Ziggy’s. 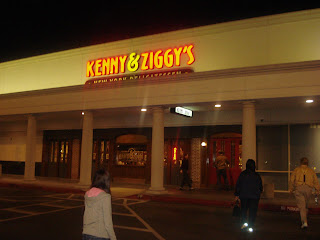 A few blocks from the galleria, Kenny & Ziggy’s is a take on the classic deli.

Truth be told, K & Z’s is kitsch to a fault. The deli is lined with old playbills, funny quotes pertaining to delis and food, and various movie stills with random lines about delis under them. It’s all too much.

Granted, the real test of a deli is the food. K & Z’s starts well with a nice plate of half-sours as soon you’re seated. 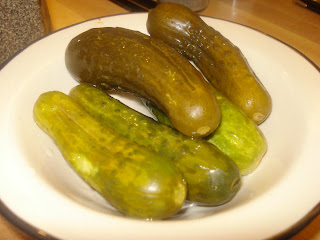 I love a good half-sour, especially when you can taste the garlic and pepper, and these were perfect examples. 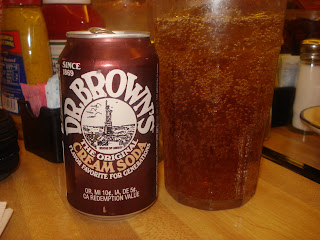 Who cares if it’s clichéd? Doc Brown’s cream soda is a damn fine beverage, and should be the accompaniment to any good sandwich. 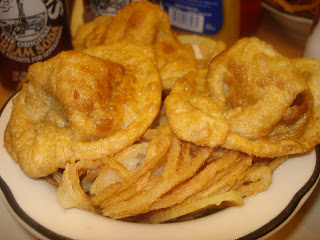 With the half-sours done, I soon received my appetizer of fried kreplach. Kreplach, or Jewish ravioli, are dumplings filled with meat or mashed potatoes. These examples are good and doughy with a nice bit of meat inside. The fried onions are a nice touch, although they don’t travel well at all. All onions aside, these kreplach sit in your stomach like a brick, perhaps an inherent trait of the fried Jewish ravioli?

Now for the star of the show, the “fiddler on the roof of your mouth”, 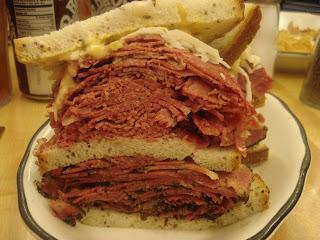 A triple decker sandwich consisting of corned beef, pastrami, cole slaw and Russian dressing. As good as these sandwiches look, they’re a pain in the ass to try and eat. This sandwich was especially difficult because I seemed to have gotten nothing but end pieces of meat. Good though these are, my sandwich could have used more Russian dressing, and a reasonable way to eat it.

Regardless of their faults and foibles, Kenny and Ziggy’s is a decent example of deli, even if it is 2500 miles from the Empire state. I’ll continue to be a patron, and soldier through the annoying quotes and pictures that litter the landscape, because only a fool can turn down a good pastrami sandwich.

K&Z is the onliest place in town to get authentic NYC Jewish food. Thankfully, it is good Jewish food made by some very fine Mexicans under the tutelage of an authentic NYC Jewish person. If I forget to go there, I start having withdrawal pangs. Face it. It's so easy to find great food in Houston that a place has to be great to be remembered at all.

"it is good Jewish food made by some very fine Mexicans under the tutelage of an authentic NYC Jewish person." I think that's the case with almost every restaurant, but it's not at all a detraction.

I haven't got to the point of withdrawal pains, but it does always come up in Houston conversation.