When it comes to the Jackson restaurant scene, Dan Blumenthal and Jeff Good pretty much have a corner on the market. In 2007 with the wildly successful Bravo and Broad Street Bakery under their belts, they decided Jackson was in dire need of a New York style pizzeria. As a result, Sal &

Even though I had enjoyed take out from them for quite some time, last week was the first time I ever had a seat in Sal & Mookie’s. After meeting my friends Stephen and Tiffany, we got down to business and started ordering.

We started out simply enough with the cheese filled fried ravioli. 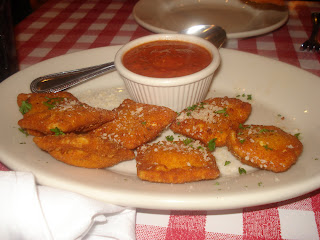 You’d be hard pressed to find someone who doesn’t enjoy ravioli, and why shouldn’t something be better if it’s fried? As much as I enjoy these, I can’t get over the nagging feeling of how ridiculously simple they are to make. If you get the frozen, pre-made ravioli, dip it in buttermilk and then breadcrumbs, and fry it; you get the exact same product as Sal & Mookie’s. Regardless of their simplicity, these ravioli were short lived and thoroughly enjoyed.

In our typical fashion, the three of us decided another appetizer was in order. Despite Tiffany’s allergy to mushrooms, Stephen and I soon received the portabella fries. 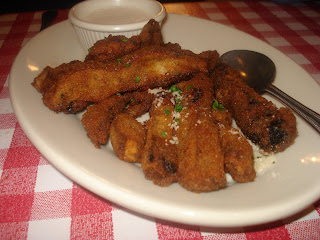 Accompanied by a horseradish sauce, I quickly realized the ravioli’s marinara was a much better dipping sauce. The horseradish lacked the necessary pungency, and Stephen and me both thought it was a watered down blue cheese dip. All dipping sauces aside, these portabella fries are a fine appetizer, even if they are just another fried appetizer.

Now for the main event, and the raison d’être of Sal & Mookie’s: the pizza, and after arguing over which pizza, we all compromised with the Hamilton Avenue tomato pie. 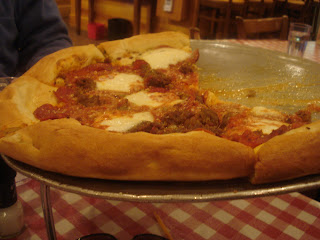 From that picture, you can get an idea of just how greasy this pie is, although every New York slice I’ve ever had has been at least a little greasy. 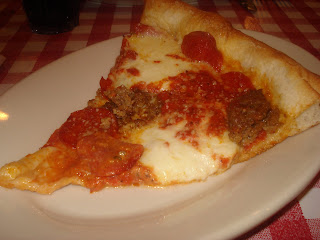 Here’s a better look at an individual slice. Made with fior di latte on the bottom, pepperoni, crumbled Italian sausage and tomato sauce on top, it’s a hefty slice of pizza. For those unaware, fior di latte is mozzarella made with cow’s milk as opposed to buffalo’s milk. You can see that the pizza has slices of mozzarella cheese instead of shredded. The only downside to this pizza, aside from greasiness, is that the slices aren’t resilient enough to hold, much less be properly folded. This is really a fork and knife pizza, unless you want to sacrifice the front of your shirt.

Sure, Sal & Mookie’s will never pass for true New York pizza, just like true bagels can’t be found outside the city, but for Jackson, this is a pretty fine pizza joint. When all is said and done, there is a reason owners Dan Blumenthal and Jeff Good have a corner on the Jackson restaurant scene, they do a damn fine job.

For a look at the Sam Adams Beer Dinner at Sal & Mookie's, please click here

You are obviously mistaken. I was visiting the city and happened to stop by for a quick bite. It was terrible. The pizza is overly greesy. Their portabella fries literally tasted like dirt. Service was horrible. Is there any chance you know the owners and are friends, therefore you feel like you have to be nice?