I love my iphone, I really do. I especially love the apps, particularly the urban spoon application. After stopping at Star Provisions, my sister and I needed a quick lunch before hitting the road for Atlanta, so we decided to see what Urban Spoon would offer us for midtown and pizza. Baraonda was our answer. Specializing in wood fired pizzas, and two blocks from the Fox Theatre, Baraonda isn’t anything too spectacular, but it was convenient and relatively quick.

It was a cold day in Atlanta, and the hostess was as cold as the weather. It was as if we were troubling here by asking for a table, and because we made her put down her book, we were given the coldest table in the restaurant. Every time the door opened, we were hit with a blast of cold air.

Trying to combat the cold, I ordered an old favorite: calamari fritti. 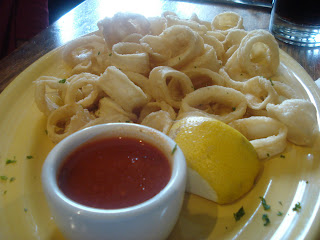 It’s always annoying when you have to ask for pepper, and these calamari needed pepper. Once they were given a fair dose of salt, pepper, and lemon, these were tasty pieces of squid. It was too bad, we couldn’t salvage the marinara sauce.

Wanting something besides a pizza magherita, I decided to go with the pizza Fra Diavolo. Made with tomato, spicy salami, and margherita, I thought the Fra needed something more, so I added on prosciutto. 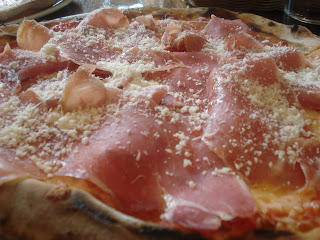 Even though they gave me a large amount of proscuitto, I felt like an ass ordering a 4 dollar topping on an 8 dollar pizza. Regardless of my similarity to a donkey, this was a nice wood fired pizza, complete with a slightly charred crust. If there was any spice to the salami, I couldn’t find it, but I just chalk that up to Atlanta’s delicate palate.

If you discount the lackluster and sometimes inattentive service, Baraonda is not a bad pizza place. However , if you start to discount those essential elements of the dining experience, then you’re just being too nice. Baraonda served its purpose of a quick pizza lunch before hitting the road, but in retrospect, we should have gone to the Vortex instead.

My name is Kelly Meeks I was browsing internet and found your blog. The author did a great job. I will subscribe to your RSS feeds. Thank you for your contribution. I am a web designer myself. And here some examples of the websites that I designed for bad credit loans cash advance company.