Aja, the latest creation of the Here To Serve restaurant group, is a hip take on pan asian cuisine. As soon as I walked in the door, I was greeted by various incarnations of the buddha and tabletop model of Mao. It all felt vaguely familiar, as if I had been in a better version of this only months before. Then it hit me, I had. This was a cut rate version of Tao in Las Vegas, right down to the giant buddha. 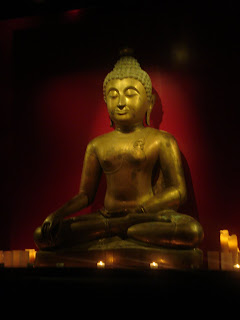 Sure the giant buddha in Aja was 10 feet tall and had come from the far east, but so had the buddha in Tao and it was 20 feet if it was an inch.

All decor aside, I was joined by my sister and her new beau, and all being self-described foodies, we were prepared to cut this restaurant down to size. Luckily Aja did most of the work for us.

Since I was a frequent visitor to Atlanta, I had come to know all of its dim sum venues well, and I had high hopes when I saw Aja featured a variety of dim sum dishes in the appetizer section of the menu. However, even the menu was disappointing when I saw chicken satay under dim sum. Pan asian food is like fusion cooking, a bastardization of cultures.

As soon as the waitress rolled over the “dim sum” cart, things went from a slow decline to an all out free fall. There’s nothing like the anticipation of the steamer cart when they open the small lids and a puff of steam reveals the hidden treasures inside. Aja had decided to keep everything on a sterno cart and it showed. We decided to sample some dim sum favorites and ordered a nice variety: shrimp dumplings, tofu with shrimp, shrimp and crab shumai, crab and lobster dumplings, and pork sticky buns. 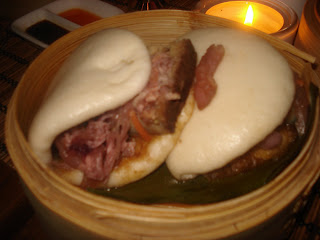 Aja’s review in Creative Loafing was positively glowing, especially over their take on char siu bao, or pork sticky buns. The clods at CL had made these out to delicate slices of pork belly surrounded with sumptuous buns that were not at all sticky. I’m never trusting Creative Loafing again. This was tough, stringy pork with regular sticky bun dough. Difficult to handle, and even harder to share, I was soon longing for a real pork sticky bun, not some gailo interpretation. 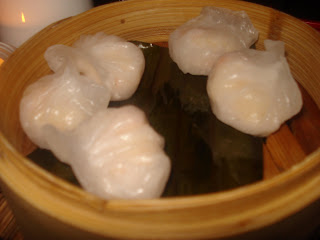 Remember how I said there was no steam in Aja’s dim sum cart? These har gao were the first true casualty. Dry, insipid, these are an affront to shrimp dumplings. I would say that it’s nice we were given five instead of the usual four, but it was just another piece of crap. I usually say that har gao is a litmus test for dim sum, and I should have stopped there, but I persevered 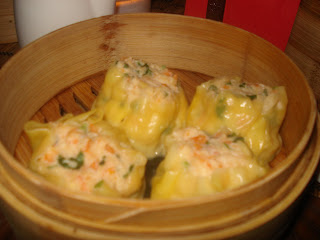 I love shumai, they’re typically a real treat. True, they’re nothing more than pork in a wonton wrapper than has been steamed, but it’s allure is its simplicity. These were made from crab and shrimp and they were dry, so dry they stuck to the bottom of the steamer basket. 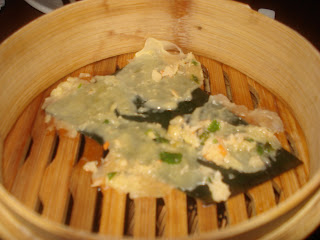 That means that everyone you tried to eat one, they bottom fell out, consequently, so did the filling. I think I could make better shumai without using my hands. 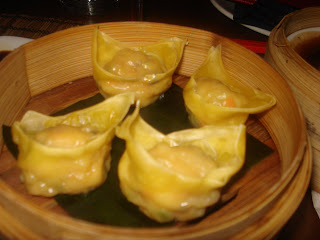 I like the idea of crab and lobster dumplings, and not to sound like a broken record, but the steamer cart killed these. Had they been kept warm with steam instead of dry heat, they might not have turned to leather. Honestly, its like someone tried to make these in a tandoori oven. 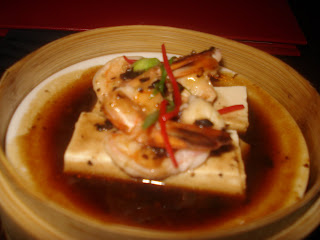 There are several ways to have tofu when you eat dim sum, my favorite with they wrap diced shrimp in tofu, fry it and then steam it. It’s moist, a little greasy, and just delicious. This was some hard tofu than had been doused in soy sauce, and accented with some leathery shrimp. I began to think this was the work of Mexicans making Chinese food.

All dim sum aside, we muddled through the prolonged wait and received our entrees.

The first was braised pork belly with rice noodles and vegetables. 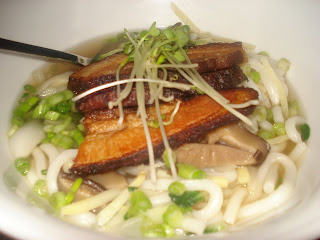 This would have been a pretty good dish for one person. It’s like a big bowl of pho, but when you’re just given chopsticks, a fork, and a plate, it’s pretty difficult to share. Like the sticky buns, these bit of pork belly missed the boat for being tender, instead it was tough and chewy. Who does this to good pork, honestly?

Next up was the wok fried duck breast with a honey ginger sauce. 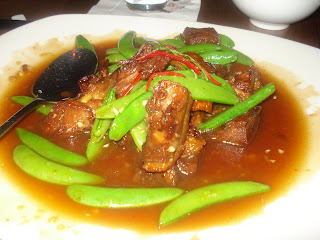 This was the best of the three entrees as the duck breast was crispy, yet moist. I was actually a little surprised that Aja managed to keep the duck crispy even though it was drowning in sauce. It does seem that they threw the snow peas in there as an afterthought, but the food here does seem to be little more than an afterthought.

Our last dish was the hot pot with scallops, shrimp, and fish in a spicy broth. 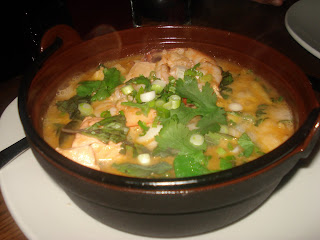 lIke the pork belly with noodles, this hot pot was impossible to share. It did have a subtle curry flavor, but when I heard hot pot, I was expecting a shabu shabu style dish. This was just a thin seafood soup.

As much as the food and presentation brought down Aja, it was the service that killed it for the entrees. Once we were brought the pork belly and noodles, it took more than 10 minutes to get the rest of the entrees. I realize that Aja is a new restaurant, but these sort of restaurant basics should be ironed out before the opening. All negativity aside, there was one thing that I’ll remember about Aja, the caroling. While we were finishing our meal, a large party decided to break into jingle bells. It was a little odd, but it got even weirder when the entire restaurant joined in.

All singing aside, the negatives of Aja far outweigh any benefits the decor and atmosphere might bring. I have the feeling that Aja will suffer the same fate of Emeril’s Atlanta, and that the bottom floor of the Alliance Center will be forever cursed.

I hesitated to read your review as I was terrified of living (or should I say surviving) the experience over again. If I was a HTS investor, I would be pissed. Such a waste of a great location...

funny review, and delightfully 'cynical'. checked ya out since a friend of mine is having a gathering there tonight, and i've not yet been. not a big fan of H2S restaurants in general. now i know not to get my hopes up too high for this one.