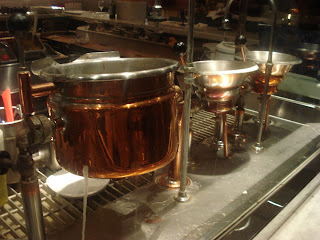 After a long and not particularly arduous journey west, we decided to meet my Uncle and his kids for a nice dinner. At the suggestion of my uncle, we headed to Pesce, a hip seafood restaurant.

Despite being an expansive building, everything inside was crowded close together. It was actually quite challenging to get to the table. However, once seated, we all could get down to the business at hand, dinner.

When my Uncle first suggested Pesce, I did a quick search for customer reviews. On the whole, the reviews were pretty favorable, especially for the seafood martini with jumbo lump crab meat, lobster, shrimp. As great as that sounds I was turned off by the cole slaw with napa cabbage, avocado, and hearts of palm in a Kim Chee dressing. So, I went with the classic shrimp cocktail instead. 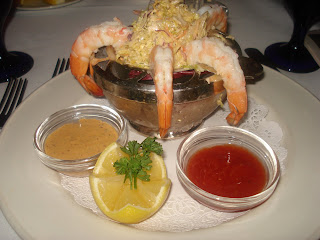 I love a good shrimp cocktail. It’s the perfect combination of fresh shrimp and cocktail sauce with extra horseradish, an absolute classic. This was pretty decent representation of the timeless dish. The shrimp were “creole spiced” and they did have a nice touch of cayenne, but the star of the plate was the remoulade. I’ve never had one like it, this remoulade definitely featured a heavy hand with the creole mustard.

Since Pesce was known for its fresh seafood, I had my heart set on the whole roasted fish. Unfortunately, our waiter brought the bad news that they were completely sold out. To console myself, I elected to go with the thai style fried flounder. 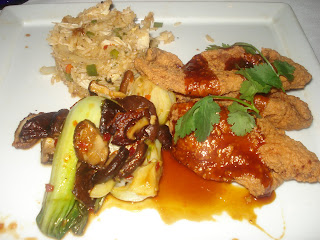 Served with a lemongrass and crab meat fried rice, stir fried baby bok choy, and a Thai barbeque sauce, this had potential to be a great little entree. Unfortunately, this had many many faults. The fried rice was little more than starch, and I couldn’t taste any crab or lemongrass to save my life. It really seemed like nothing more than egg, rice, and an abundance of soy sauce.

The main detraction from the dish was supposed to be the main attraction. When I read Thai style fried flounder, I was expecting a whole fish with maybe a little spice to it. Instead, this was a collection of flounder fillets that had been overcooked and turned to mush. It still could have been tasty mush if the Thai barbeque sauce hadn’t overpowered everything on the plate.

Fortunately, the vegetables were there to try and salvage the dish. The bok choy and the shitake mushrooms were perfectly stir fried, and the mushrooms had the gumption to stand up to the Thai barbeque sauce.

The real killer for the meal was when I ordered the Texas artisan cheese plate for desert. 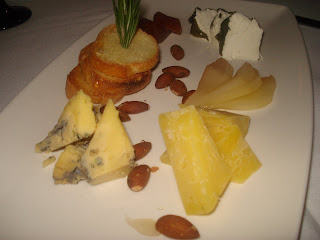 It’s a picturesque presentation isn’t it? Little slices of cheese, delicately arranged with a sliced pear, almonds, and rounds of bread. I knew this dish was doomed when I asked the waiter for the names of the cheeses. Usually, waiters are more than happy to explain "this to be so and so cheese from this farm." Instead, I was told this is Texas boss blue cheese, Texas cheddar, and Texas goat cheese. Notice the emphasis on Texas. The cheddar was nothing spectacular, but I think it could make a fine mac & cheese. The goat cheese was fine creamy,tangy cheese, far and away my favorite. I tend to avoid blue cheeses. Most of the time, people serve blue cheese with a side of burger, or something like that. Blue cheese is definitely an overused condiment This boss blue cheese was a bit mild, a far cry from the pungency of a maytag blue cheese. I actually found the boss blue and pears to be a fantastic combination. The sweetness of the pears cut through the heady flavor of the blue cheese just enough.

Would I go back to Pesce? Not immediately, there are far too many restaurants in Houston to make this a repeat performer. Although, if I went back tomorrow, I would certainly avoid the sole Asian style entree. I suppose that is a mistake on my part, but if a restaurant can’t serve a dish to perfection, it shouldn’t be on the menu.