What's the solution for a cold winter night? Beef Stew!

After a great trip to Charleston and stopover in Atlanta, everyone was back in Jackson. And what was there to greet us? Cold weather. With a cold front coming in that night, I knew the time was right for beef stew. My mother’s beef stew has somewhat of a miniature cult following among my friends from GW. Ben LaBuz is the ringleader of this, and anytime I’m in DC, he demands that I make stew, regardless of the weather.

The stew starts out simply enough, with copious amounts of beef. 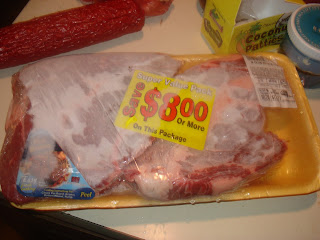 In this case, about 5 pounds of chuck roast.

I like to have the meat only partially defrosted for the next step, the dismantling of the roast. 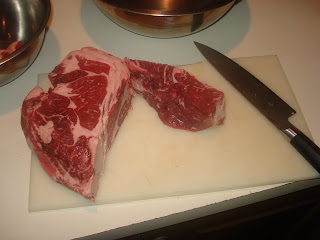 The meat is easier to cut when it’s cold, and my shun knife makes quick work of any resistant beef.

Usually I would say that you need a carton of beef stock, but seeing as I forgot to buy any, I decided to use my mother’s quick stock method. 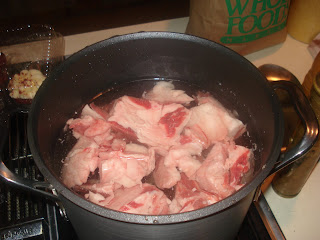 All of the trimmings went into a large pot and was put to a boil. I did find one downside to this: the trimmings are mostly fat and gristle and as a result this is a fatty stock. You’ll see what I mean later.

After all the meat is cut, it’s time for the assembly line. 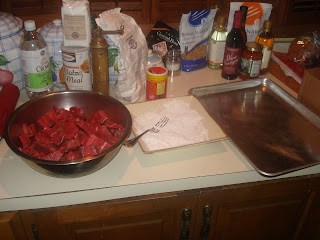 Each cube is tossed in the flour and then placed on the waiting pan. I like to prodigiously season the flour, and in this instance I used lots of fresh ground pepper and “slap ya mama” spice mix. Through the years, I’ve found that Tony Chatcherie’s is the best thing to use in the stew. The slap ya mama is really too hot, but it was either that or Tony’s More seasoning. Tony’s More seasoning is terrible in comparison to the original. 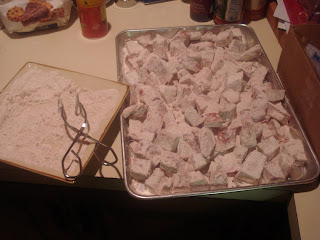 If you think flouring all that meat is tedious, you’re in for one hell of a surprise.

While all that meat is being floured and seasoned, the stock has come to a boil, and that means its time to skim. 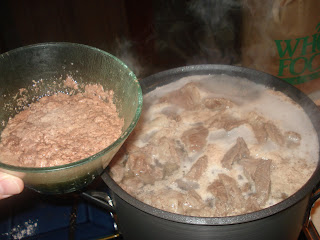 If I remember Good Eats correctly, this is just protein that has boiled off from the meat, regardless, it has to go.

The next step is so tedious that I forgot to take a picture. You have to fry the meat in batches. I know it’s a pain in the ass, but it’s a necessary evil. But good Lord does it take a long time to fry that much meat.

After you’ve fried all the meat in oil and set it aside, you’re left with a pot full of fond and grease. The next step is both a flavor additive and a thickener. 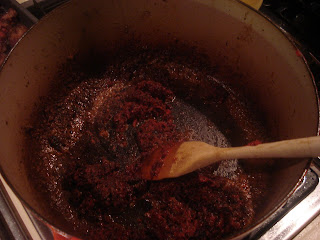 One 8 ounce can of tomato paste is added and fried. I like to let it cook by itself for a minute or two because I think it gets rid of the tinny taste of the can. I could be making that all up, but it sounds good.

Now it actually begins to look like a stew. 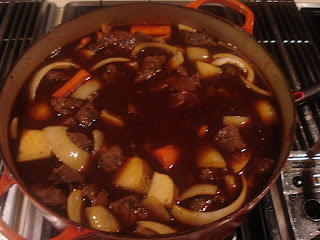 I added ladle after ladle of beef stock and then the vegetables: 3 carrots, 2 onions, and 4 potatoes, all cut into large chunks. After adding the beef back into the pot, you’ll notice the problem with beef stock from trimmings. 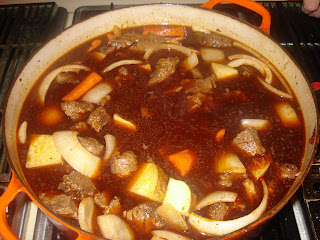 It’s pretty obvious that there are just droplets of fat everywhere. Normally I’d leave them in, but in this application it just makes everything taste greasy. 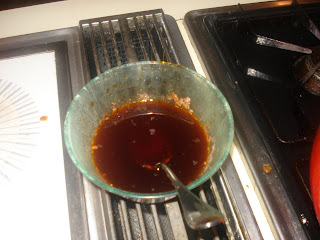 That’s how much grease I was able to skim off.

When it comes to a boil, you then lower it to a simmer to let everything cook and meld, this also gives the beef a chance to break down a little. 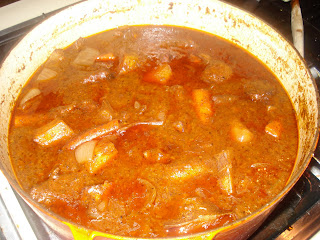 After about an hour of simmering, you end up with a big ole pot of deliciousness. 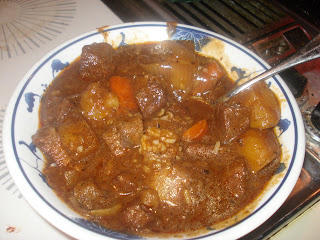 I serve it over rice and go to town. Its the perfect remedy to a cold evening.

I just made another batch!