“What do you do for lunch on Thanksgiving” is not a question that is often considered. For most people, lunch time at Thanksgiving is the time for the time for turkey presentation. That way, the meal is done and won’t interfere with the afternoon football.

This Thanksgiving, my family had elected to visit Charleston, and so we were in a quandary about our mid-day meal. After a quick search on Chowhound, I thought I had found a restaurant that was open for lunch. I had even called ahead and had heard them say they were open until 3:30. Once we arrived at McCrady’s, we were sorely disappointed to find that it only opened at 3:30. So, my family took to wandering the street, searching for an open restaurant. Luckily, we stumbled upon Blossom. 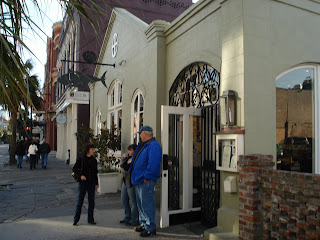 Judging from the size of the 2 pm crowd inside, it seemed Blossom had found a niche market with their Thanksgiving lunch.

Once we were seated, we were given a menu with a nice bit of variety, and the obligatory Thanksgiving special of slow roasted free range Turkey. I decided for a different fowl and ordered the navy bean and country ham chowder and the Duo of Maple Leaf Farms Duck.

The navy bean chowder was the first to arrive. 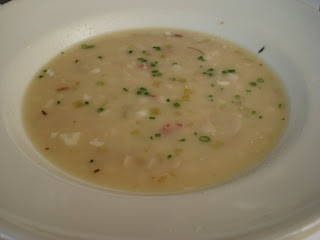 At first glance, my sister and I were puzzled as to why they called this a chowder. It was thin even for a bean soup. The chowder question aside, this soup lacked any ham. Sure there were a few specks, but this soup must be a real money maker for the restaurant as it was all beans, no ham.

In contrast, the rest of my family ordered the tomato bisque. This was the much better choice of the soups. Rich and definitely with cream, the soup was a hearty bowl, complete with small chunks of tomato for texture. These seems to happen every time I give beans a chance, someone orders the alternative and I’m left looking into a plate of cheap protein.

Soon after the bean debacle, my entree arrived. 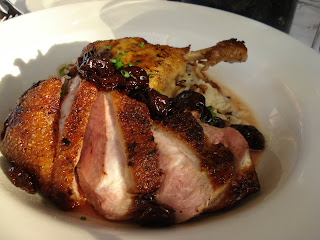 This duo of duck consisted of a confit leg, a crisp breast, minnesota grains, port cherries, and duck jus. Once I had given the waiter my order, my dad and I commenced to ague over what exactly Minnesota grains are. I thought Minnesota produced a fair amount of corn, seeing as they were a part of midwest. My dad guessed it would be some sort of wild rice. After the meal had arrived, my dad and I were both vindicated when we saw a mixture of some sort of rice like substance with a variety of corn.

All grains aside, it was time to enjoy this duo of duck. However the first bite was not too enjoyable as the “crisp breast” was anything but. Lacking any real flavor and having lost any crispness it might have had to the jus, This was a real disappointment.

As much as I was disappointed by this restaurant, the duck confit came to the rescue. I know confit is the farthest thing from healthy, but this leg was something that I could truly give thanks for. It even had a crisp underside that survived the jus which had destroyed the “crispy breast”.

For as many misnomers and lackluster items that Blossom had on their menu, I enjoyed this Thanksgiving lunch, if only for the duck confit. I would like to come back and see how the menu would different, and try the seafood that everyone else in my family enjoyed.