After a decent Thanksgiving lunch and a healthy dose of football, including a Dallas Cowboys blowout, we started downstairs for Thanksgiving dinner at the Charleston Grill.

Once you near the entrance to the restaurant, you can’t help but notice gleaming awards on the wall. 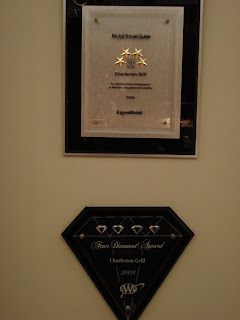 I wasn’t aware that AAA and Exxon gave out dining awards. Somehow it lacks the mystique of a Michelin star. 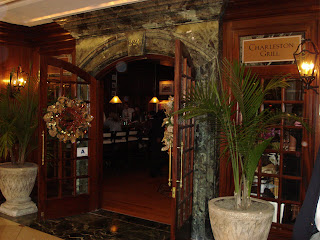 Because my dad and I had come downstairs before the girls, we decided to cozy up to the bar and grab a drink. I am immediately a fan of bar that features Blanton bourbon and a bartender that knows the line on any game.

Not too long after we received our drinks, the girls soon arrived and we were shown to our seats. When I first looked at the menu two things jumped at at me, the foie gras tart and the duck confit. Sure there were other items that looked great, but for some reason I was on a tear for duck that day.

After the prerequisite presentation of wine and bread, our appetizers began to arrive. 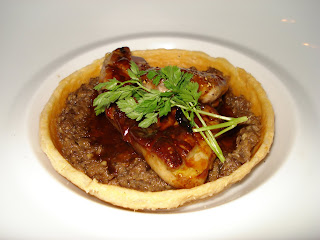 In the words of the sage, Jeremy Clarkson, “I know it’s cruel, but I do love it”, and this dish made me completely understand his point of view. This was a seared quail and foie gras tart with a a mushroom duxelles and truffle jus. If that description doesn’t scream decadence, then I don’t know what will. The taste was a decadent as the description.

How do you one up a foie gras and quail tart? With duck confit, that’s how. 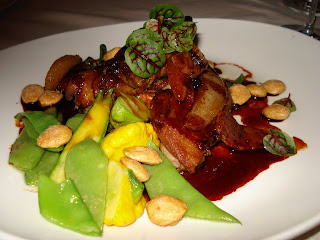 I thought the confit at lunch had been good, these duck made me completely understand how these restaurant had garnered four stars. The succulent meat was perfectly complimented by the caramelized ginger pears (which were delightfully crisp) and the champagne vinegar. Although even from the beginning, I couldn’t comprehend why they decided to toss a few oyster crackers on top.

Being a prix fixe menu for that evening, we were all obligated to choose a desert. I say that we were obligated but its not like they had to twist my arm about it. Once again I decided to stray from the family norm and chose the pumpkin cheesecake over the pecan cake. 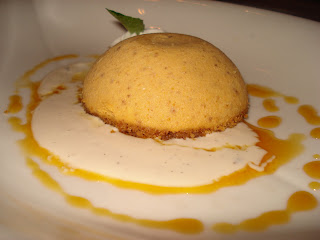 Unlike the navy bean chowder from earlier in the day, this bit of divergence paid off. The cheesecake was unnervingly light, and had the perfect balance of pumpkin flavor and sweetness. Even though I had some reservations about a maple sour cream and an orange clove reduction, everyone who tried it loved the combination.

At the end of the meal, it occurred to me that not one of the four of us had consumed turkey on Thanksgiving. Come to think of it, how often do you see turkey on a menu, excluded a sandwich board? It’s just not a featured dish in many restaurants across the country. Sure both the Charleston Grill and Blossom had tried to make the humble bird into an upscale meal, but I think Benjamin Franklin would be saddened to see where the humble turkey ranks in the modern American diet.

All ruminations about turkey aside, I can wholeheartedly recommend the Charleston Grill to anyone who makes their way to Charleston. I enjoyed nothing but impeccable service, stellar food, and a delightful ambience, complete with a jazz trio. I can only hope that next year, when my sister and I cook the Thanksgiving dinner, that we can compete.