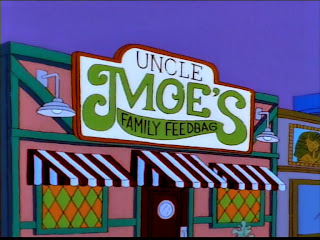 A week after eating at Fleet Landing, it came to me, this was Charleston’s version of Uncle Moe’s Family Feedbag. This was terrible food for the masses, tailored towards entertaining kids.

In fact we only went there because we were with a family with small children. Even though these were cute kids, I hate eating with small kids. You can’t have a good meal.
Case in point, my mussels appetizer 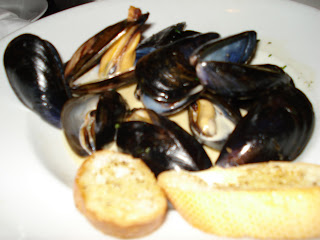 These bivalves featured an insipid cream sauce and were extremely overcooked. I refused to finish this dish.

Next up was the Fleet Landing Stuffed Hushpuppies. 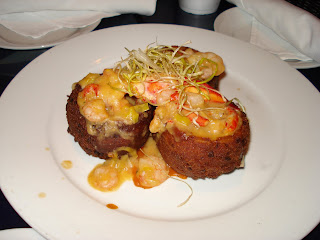 Filled with a veloute of lobster, rock shrimp, leeks and corn over a creole tomato sauce, this dish reminded me why I should avoid anything “cajun” or “creole” when I am more than 300 miles from New Orleans.

It seemed like every single place in Charleston featured shrimp and grits, and God help me, I decided to try it during my last meal in Charleston. This was a horrible, horrible mistake. 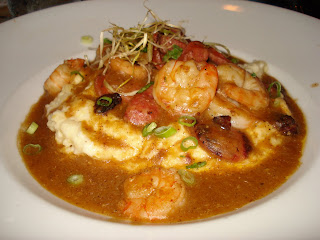 Jumbo shrimp, andouille in a gravy over grits sounds so great in premise, and I have had this done to perfection many times. In this case, the shrimp were overcooked, and I have never had andouille this insipid. I just can’t understand why people try to recreate the taste of south Louisiana and leave out all the spice.

I wish I could say the best part about Fleet Landing was leaving, but you have to walk down the pier to the street, and that walk goes over a marsh. I’m truly glad that it was a cool night because that marsh stank. I pity the people who walk there during the summer. When there are so many fantastic places to eat in Charleston, I question the sanity of anyone who voluntarily chooses Fleet Landing for a fine meal.

Went to add my review of Fleet Landing and found yours! Those hush puppies are amazing. :)