A Quick One While He’s Away - Carbonara

All Who references aside, Monday evening rolled around and I needed something quick and tasty for dinner. Luckily had been home to a fantastic butcher, Ted’s Butcher Block, and I came home with a larder full of sliced meats. Even though the meats had been vacuum sealed, I knew that I should use them asap, especially the guanciale.

The namesake of Ted’s unwrapping the guanciale.

Guanciale is an Italian bacon made with pig jowl. Ted had told me that guanciale could be used like pancetta, and I knew my favorite use of pancetta: spaghetti carbonara.

Laugh all you like but the best carbonara recipe I’ve found is from an issue of GQ. It begins simply with boiling your water and adding the pasta. 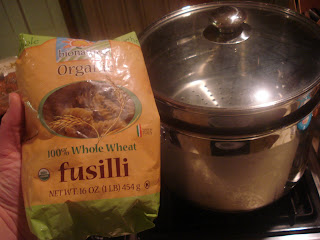 I realize that is not spaghetti, but it was the only whole wheat pasta I could find in the freezer. I rationalized that the fusilli would do a nice job of holding onto the sauce, and they actually worked too well.

Here are the most important ingredients. 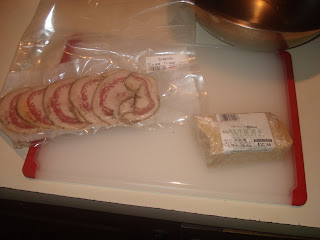 A half pound of sliced guanciale and a sizable chunk of parmesan.

While I was waiting on the water to boil and pasta to cook, I took to the guanciale and carved it up into little matchsticks. 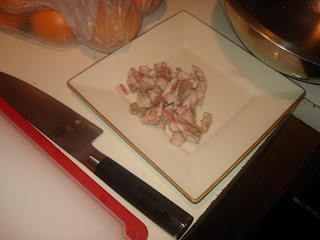 Before I started cooking the guanciale, I got the rest of the sauce ready. What I love about this dish is the ease and simplicity. Here’s two eggs, some fresh black pepper, and about a quarter cup of grated parmesan in the bottom of a mixing bowl. 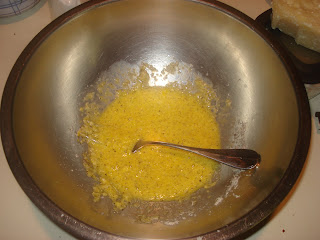 The idea is to take the cooked pasta and dump it in the mixing bowl, and when you toss the pasta it cooks the egg and makes a silky sauce.

However, before any pasta can be tossed, I had to crisp the guanciale. 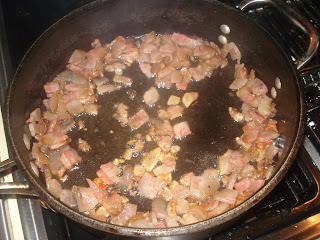 Guanciale is known for having a much porkier flavor than pancetta, and it was damn tasty when it had crisped up.

Once you’ve cooked the pasta to al dente and drained it, you dump it in the mixing bowl. 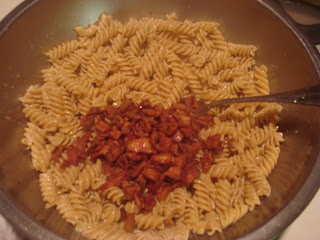 I then threw in the crispy guanciale.

After some liberal usage of grated parmesan, you end up with something like this. 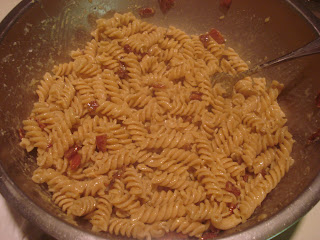 Once all is said and done, this was finished in less than 20 minutes. The most annoying part is getting the pot of water to boil

Tasting this batch, I noticed a few things. First I had used too much pasta. I thought my dad would help me eat this, but he fell through on his end. Regardless, it’s better to only use half a container, a definite rookie mistake on my part. Second, the guanciale really does have a more prominent flavor than pancetta, but it almost seemed lost in this much pasta, again my mistake.


So the secret to a successful carbonara is to follow the basic guidelines and don’t use so much pasta.

Email ThisBlogThis!Share to TwitterShare to FacebookShare to Pinterest
Labels: Cooking at Home