After a great Thanksgiving vacation in Charleston, it was time to head back to Jackson. For me, that meant the mandatory stop in Atlanta. So after fighting the traffic in Columbia and the Atlanta perimeter, my sister and I decided it was time for a late lunch, but before anything could be consumed, Jennifer’s Christmas tree had to be picked out and tied to the roof of my tahoe.

With a Christmas tree on my roof and feeling extra festive, we headed to Genki. Genki is a small sushi place right near my sister’s apartment, and it has recently been remodeled. To be quite honest, I can’t remember what it looked like before, but it looked like your standard modern sushi bar now. Lots of blond wood, stainless steel and annoying techno music dominate the décor. Thankfully they had football on as a diversion.

I’m a sucker for appetizers, so we started with an old standard. 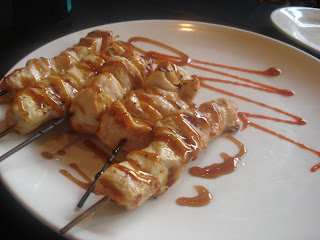 “From the streets of Tokyo”, this was a tasty interpretation of yakitori. Granted it’s hard to go wrong with grilled chicken and a teriyaki glaze. I just wish they had the S&B pepper mix that goes so well with Japanese food.

Continuing the theme of old favorites, my sister and I had to order the fried gyoza. 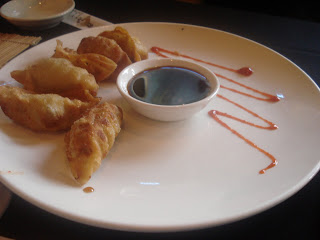 These were a rung or two above those frozen gyoza you can buy at Trader Joe’s. Nothing to write home about, but they were still satisfying. The spicy ponzu was a different story. The bowl in the middle of the plate was full of regular ponzu, but the artful drizzle seemed to be an off-brand sriracha.

The last appetizer was my favorite. 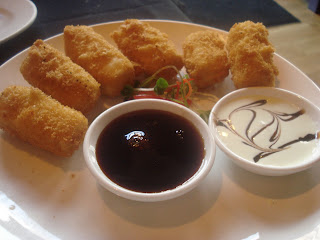 Despite our large number of appetizers, Jennifer and I ordered noodle entrees as well. Jennifer made some odd combination bowl, while I tried the Goma Beef bowl. 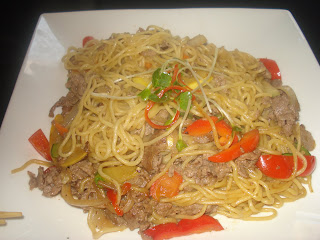 This wasn’t a bad noodle dish, but it just lacking, especially with the “spicy sesame sauce”. I think that goes back to anything labeled spicy in Atlanta tastes normal to my family. I had to give this a healthy dose of sriracha (rooster sauce) to get the heat I wanted.

All through the meal, we were trying to figure out what had been done to warrant Genki being closed so long. We never could decide. It does look different, but like the food, it’s nothing spectacular. Genki is just a decent and most importantly convenient sushi joint; not worth going out of your way, but great for a 4pm lunch.