For everyone at home, last Sunday was a shopping day. So we made the rounds of county line and stopped by Sam’s for some more led Christmas tree lights, but instead of going home via 55, we went through Ridgeland. To get to Old Agency, you have to go down , and I noticed that Jammin’ Beignetz was open.

Jammin’ Beignetz, owned and operated by James Roache of Ró Chez fame, is tiny restaurant that features……..you guessed it, beignets. I’ve driven past it a dozen times before I even noticed it, and I had to see Roache at the Mississippi Farmer’s Market before I even thought of trying it. So call it fate, but last Sunday we decided to pull up and give Jammin’ Beignetz a try.

Like the building, the menu for Jammin’ Beignetz is small, only five items. Roache tries to follow the musical theme and gives each beignet a role in the band. I decided I should try the rhythm. 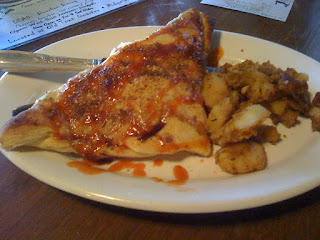 Made up of eggs, andouille, and “cheez”; to me, this is an odd beignet. In fact, it’s far from your typical idea of a “café du monde” beignet. Made from a variation on puff pastry, this beignet is drizzled with hot sauce and balsamic vinegar, which is a pretty tasty combination. Sauces aside, this is not what I was expecting but still a nice treat. My dad was raving about the potatoes, but I wasn’t as flabbergasted. They tasted like a decent roasted potatoes, nothing too exceptional. 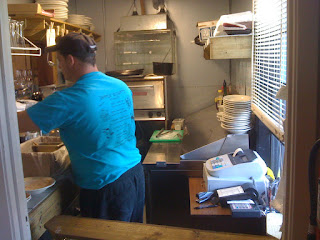 I figured a good litmus test for a place called Jammin’ Beignetz would be the traditional beignet. Fried and covered in powdered sugar, there are few things that are finer with a cup of chickory coffee. 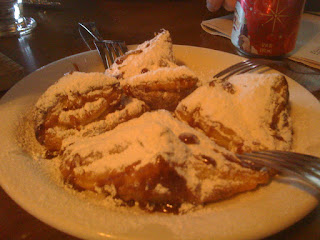 These were not traditional beignets. In fact they seemed to be little more than puff pastry with lots of powdered sugar and cinnamon syrup. The cinnamon syrup was excellent, but I was disappointed with the beignets.

After all was said and done, my mother said her “bass” beignet was the best. Being a crawfish tasso beignet with trinity and “cheez”, she was probably right. I’m not going to write off Jammin Beignetz until I try more of their menu, and with only five items it shouldn’t take me too long. I just wish Roache would spell things correctly.

I really like this wonderful plate, I think it would be a very good and unforgettable plate to make my considerations. Buy Viagra Viagra