After a few suggestions from the concierge and a group discussion, we settled on Grill 225 for Friday dinner in Charleston. Located in the Market Pavillion hotel, Grill 225 was a pleasant 10 minute walk from our hotel, and it has the classic steak house appearance. 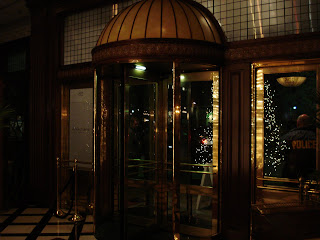 Big leather booths, loads of dark wood, and an ample selection of wine make the perfect mood for mass consumption of beef, luckily Grill 225 was more than happy to satisfy.

What better way to start off a meal than with an order of escargot? 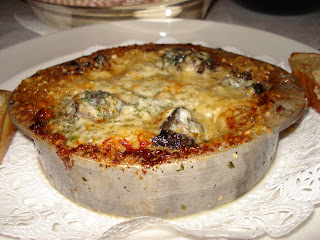 Now there are few things better for an appetizer than a plate of escargot. A symphony of butter, garlic, and parsley This was not a symphony, more like junior high band. It’s a real shame, because there was thing that killed this dish, the kasseri cheese. I had questioned the waiter as to why they put a Greek cheese on a French dish. He just replied that it was their best appetizer and I was sure to enjoy it. I heartily disagreed.

My mother took a similar route with her choice in appetizer by choosing the shrimp brulee. 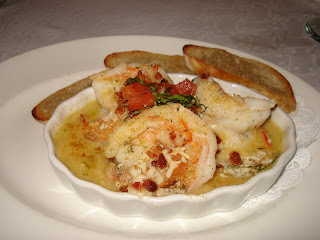 I say similar because this was dish was also doused in butter and garlic, but her dish lacked the insipid Greek cheese, thankfully. This was a class act of an appetizer, and the shrimp were gigantic.

Like I said in an earlier post, my family thinks alike in many aspects. So to round out the trio of garlicky appetizers, my sister ordered the garlic calamari. 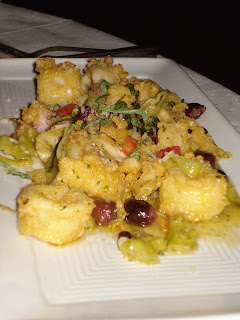 Like the other two appetizers, this was garlic with a side of calamari, though in a good way. Regardless, the quantities of these appetizers made them the size of a decent entree. 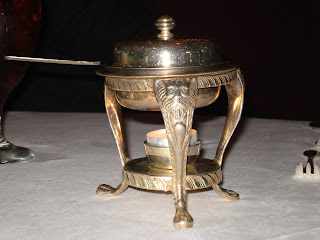 A dish of melted butter, a sign of things to come.

My sister’s entree was the first to arrive. 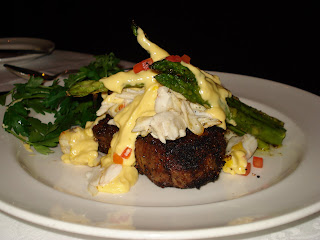 The scary thing is that is a petite filet. Even though this was a 10 oz filet, my sister decided she need to make it a filet oscar. This turned out to be a bad decision as the hollandaise sauce overpowered everything in sight especially the lump crab meat.. This seems to be theme with Grill 225, they take a marvelous idea and overpower it with some unique touch.

What better way to enjoy a steak than with a three pound Maine lobster? That was my Mom’s train of thought, and I was more than happy to join in the fray. 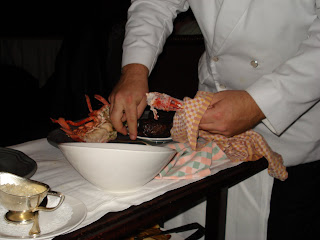 Here is our waiter picking our lobster for us.

After his quick work with the crustacean, I was presented with this. 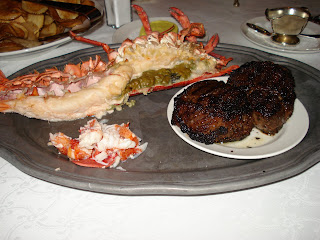 Before all this food made the way to the table, I had a little argument with the waiter about wet aged beef. I questioned why Grill 225, one of the “great steakhouses of North America” would use wet aging over dry aging. He told me how you needed a quality butcher to cut dry aged beef and how the beef was so fickle when it was exposed to air. In the end, I got him to agree to the ultimate truth, dry aging costs more money. By the simple fact that dry aging reduces the moisture content of beef thereby reducing the weight, that means lost revenue for the restaurant.

In the end, Grill 225 was a classic study in steakhouse excess. Sure I can argue the virtues of dry vs wet aging, but overall this was a very good meal. It had potential for excellence but there were some nagging details like the kasseri cheese on the escargot that kept this from being the star of the trip.

Charleston west virginia downtown, South Carolina is a must plan for vacation. it's got everything we need. Great food, accommodation and the places to visit are just unforgettable. According to me Grill 225 is nice.