Just in time for the Thanksgiving holiday, my family and I arrived in Charleston, South Carolina. One might ask, why would we leave Jackson for the holiday? The long and the short of it is, construction. Anyway, after arriving a little later than we expected, we made reservations at Anson for 8:30 that evening.

At first glance, Anson really has the look of a New Orleans building, complete with wrought iron balcony and a narrow frame. Once inside, the restaurant carried over the same New Orleans feel.

Surroundings aside, I’m more interested in the food, and we started with an appetizer for the table, roasted oysters. 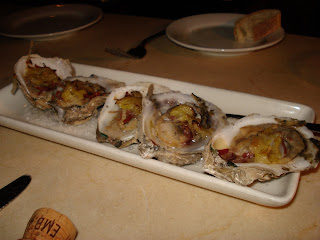 Served with country ham, leeks, and a sherry mignonette, these oysters were a great introduction to Charleston cuisine. I really enjoyed how the saltiness of the ham played well with the salinity of the oysters; all that left the leeks little more than an afterthought.

After the roasted oysters, I had the she crab soup. 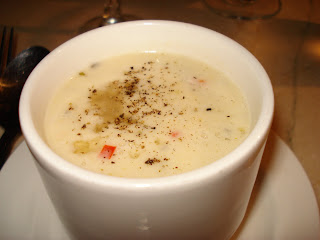 I’m not sure why, but when I read sherry and soup I automatically envisioned the perfection that is the turtle soup from Commander’s Palace in Nola. This soup was not up to par with Commanders’s, but that doesn’t mean that it was not a nice soup, save for the shells. 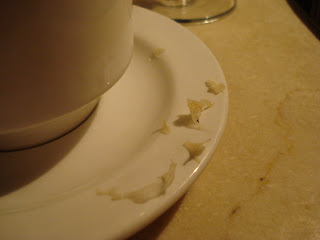 I spent the better part of 5 minutes taking a spoon full then picking the shells out from my teeth. If you’re going to serve crab, make a damn effort and pick through the meat.

Per the waiter’s recommendation, I passed on the roasted duck breast and went straight to the short ribs. 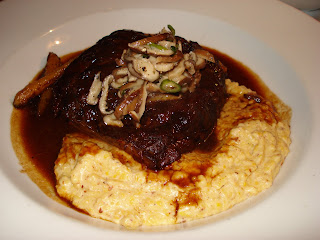 Granted, it’s hard to go wrong with duck breast or short ribs, and while I’ve had better short ribs, this was an excellent take on the dish. Complimented with polenta ‘spin rossa’, autumn vegetables, and pickled shitakes, these was lovely cut of beef that really was fork tender. At first I was a little apprehensive about the combination of pickled shitakes and beef, but much to my surprise they meshed very well.

After the remainder of the short ribs had been bussed away, I paused to think about why they had “polenta” with the dish whereas everything else on the menu featured grits. Maybe I’m wrong, but I thought polenta and grits were practically 6 to one, half dozen to the other. Regardless, if Anson is an indication for how good the food will be in Charleston, then I will have many things to give thanks for.