When a city has a much history as Charleston, you have to do something cheesy to take it all in. For my family that meant a carriage ride. After a wet, yet highly informative ride, we were all cold and looking for a good meal. It just so happens that the staff at Charleston Cooks, a local cooking supply store, had recommended the Cru Cafe which was less than a block from the stables. 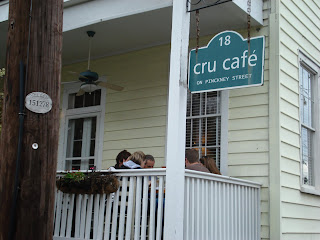 In my experiences, I found that cafes in old homes are generally hit and miss. Thankfully, the Cru Cafe would prove to be a worthwhile stop on our culinary tour of Charleston. 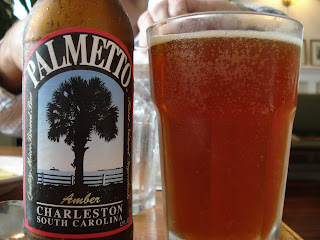 I love to see a local beer on the menu, and for Charleston, that beer is Palmetto. It was labeled an amber, but despite the color, it had the hoppy taste of an ipa.

Seeing as I had been stuck on the edge of the carriage’s bench seat,my entire right side had been drenched in the rain. I thought the best thing to warm me up would be a bowl of steaming soup. I had a little bit of trepidation about soup in Charleston from my previous experiences at Anson and Blossom, but I decided to persevere and ordered the soup of the day. 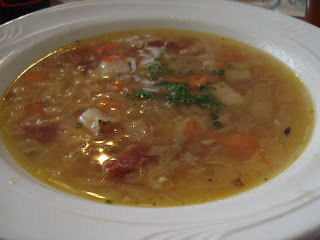 The soup for that Saturday was corned beef and cabbage. I suppose its a subtle nod to the Irish heritage of Charleston. Regardless of its origins, this was a fine soup. Thankfully the cabbage was a background player to the corned beef, and with a little salt and pepper, I was well on my way to warmth.

As an appetizer for the table, we ordered a portion of the calamari, which the waiter declared was the best in the city. 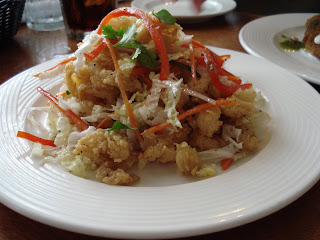 If this is the best calamari in Charleston, then the city has a long way to go. That’s not to say it was a bad appetizer, in fact the topping of Asian slaw was a nice touch and went very well with the squid, but calamari were a little on the bland side.

Seeing as my family is never satisfied with a single appetizer, we also ordered the fried green tomatoes, even though they were suspiciously out of season. 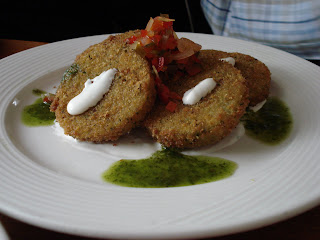 Even though I’m not really a fan of whole or sliced tomatoes, these were a tasty dish. The roasted corn and pepper relish seemed to be a bit of an afterthought.

I was in a bit of a quandary when it came to my entree, luckily I had been on a roll for duck on the trip, so I knew it had to be the duck confit arugula salad. 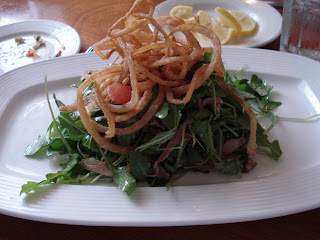 Without a doubt, the first thing you would notice is the pile of fried onions on top of the greens. While they were tasty and crispy, they were too hard to integrate with the rest of the salad, so you couldn’t get a taste of everything in one bite. The other problem with the salad was the caramelized pecans. Like the onions, they were quite tasty, but hard to get on your fork. Problematic onions and pecans aside, this was a delightful salad where the port vinaigrette went perfectly well with the duck confit.

The nice thing about eating with my family is that we have pretty similar tastes. So each family member seemed to order something that I wanted to try.

My sister ordered a sandwich with cappicolla, salami, prosciutto, and mozzarella cheese, which seemed a little heavy for lunch. 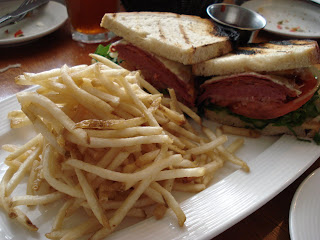 All heaviness aside, I had a bite of this sandwich and it was fantastic. Granted, any sandwich with a large amount of hot, fresh meats is a winner in my book.

For my parents, lunch was a variation of general tso’s chicken. I know it seems odd that a little cottage restaurant in Charleston would feature a classic Americanized Chinese dish, but Cru Cafe cooked the dish to perfection. 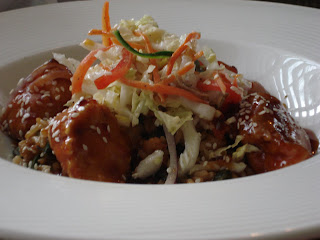 This was my mother’s dish, the classic General Tso’s chicken with fried rice, and slaw. When I tried the chicken, I was amazed that the chicken was still crunchy even after being doused in the General Tso’s sauce. I could quickly see why the waitstaff had said the restaurant was known for this dish.

Last but not least was a side of four cheese macaroni. 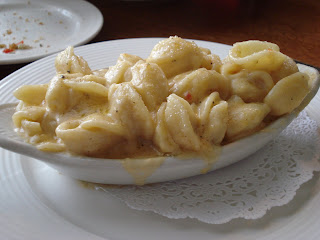 I’m not really sure why we ordered this, but my sister loves to try variations on mac & cheese. This was a very dense side dish, but I thought the combination of fontina, pepper jack, mozzarella, and cheddar cheeses were well thought out.

As I’ve said many times before, I have great respect for a restaurant that shows off its kitchen. 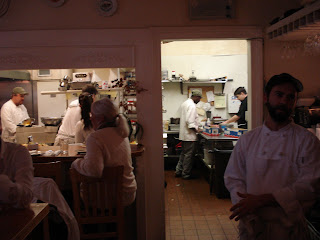 It’s also great when the chef comes out to ask to how the food is; I suppose that’s the benefit of having only 11 tables in your restaurant. I don’t really remember how it came up but we ended up meeting the lunch chef, who happened to be from Jackson. He’s the bearded fellow on the far right of the picture. Knowing that a guy from Jackson made such a great meal for us made this meal even better. I would whole heartedly recommended Cru Cafe to anyone who is making their way to Charleston.

Charleston west virginia downtown, South Carolina, has the best restaurants in the world. Cafe at charleston, which i don't miss when i visit charleston.