Before hitting I-20 and heading back to Jackson, I decided to run some errands around Atlanta, and of course lunch. Since I was going to be in the area, I chose Atlanta Fish Market. Often rated the best seafood in Atlanta, AFM is part of the Buckhead Life Group and really is a good place for seafood. Of course there is one thing that separates AFM from other restaurants on Pharr Road. 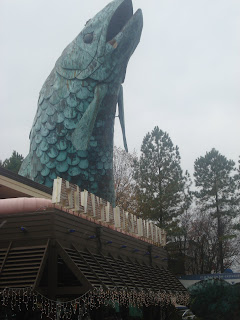 That’s a 40 foot (give or take) copper fish, and you can see it from a mile away.

Once inside I was disappointed to find that the lobster tempura roll and the stone crab claws, two of my favorite dishes, were either out of season or no longer on the menu. So I had to try something different that day. 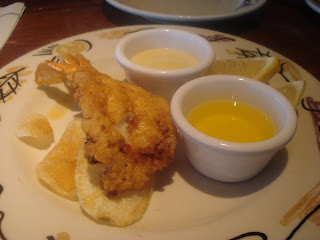 I started out with AFM’s “signature” fried lobster tail. A little on the greasy side, this was a pedestrian take on lobster. There are few things that go well with honey mustard sauce, and fried lobster isn’t one of them.

While I was ordering, I noticed a freak occurrence through the window; snow in Atlanta. Sure it didn’t stick, but 40 degrees is cold for the south, so a bowl of soup was in order, chowder actually, a bowl of chowder. 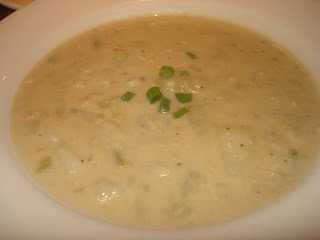 Looking at it now, it’s hard to make a bowl of chowder look photogenic. It’s lumpy, white and looks an awful lot like a bowl of glue. Thankfully the clam & cod chowder didn’t taste like glue. Although it did suffer the fate of constant cooking which rendered the clams extra dense and chewy, and the cod had apparently disintegrated. As much as I like clam chowder, it suffers the same fate as gumbo. It’s hard to find a good specimen outside of its native region.

To make up for my missing lobster tempura roll, I took a chance on the super crunch roll. 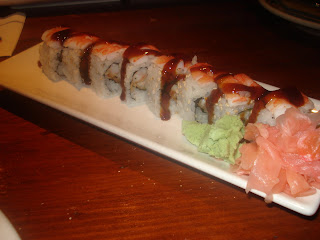 Really nothing more than a shrimp tempura roll with boiled shrimp and eel sauce on top, this was a lackluster substitution for the stellar lobster roll. In retrospect, I should have skipped this dish and gone for something else.

Even though this review might seem like AFM isn’t a good restaurant, it really is. This was just a lackluster visit. I came in with high hopes for certain dishes, and AFM wasn’t able to live up to my dreams. All that aside, there was thing that bugged me about this visit. When I asked what was in the gumbo, the waitress told me that a little bit of everything was thrown in. I don’t know about you, but I don’t really like the idea of salmon or tuna in my gumbo.