Last week I decided I needed a quick break from Jackson. So I loaded up the Tahoe and hit I-20. Once I got to Buckhead, we decided to head somewhere different for Dinner. My sister suggested Two Urban Licks, and we soon made our way to the Virginia Highlands.

When you first come into the restaurant, you can’t help but notice the wall of stainless steel wine barrels. 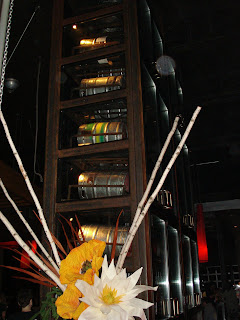 Forty two barrels make up this wine wall, and it features a nice variety of domestic wines. 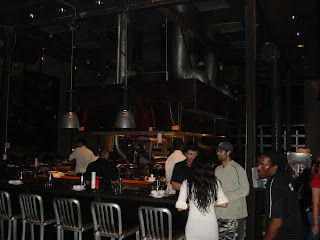 After the barrel tower of wine, the kitchen in the middle of the restaurants catches your eye next, mainly because of the 14 foot wood pit rotisserie. Unfortunately, the rotisserie was inactive for my visit, and I was later told that it would soon be replaced.

I enjoy any restaurant that has a menu that changes daily, and for Wednesday, November 12th, there was a nice selection of dishes. I decided to give the empanadas a try for my appetizer. 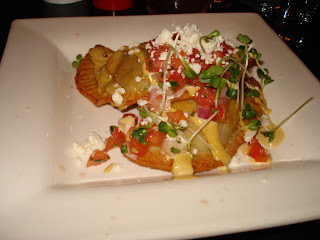 Made with a smoked brisket and covered with diced tomatoes, bean sprouts and a garlic aioli, this was a pleasant first dish. Brisket is a tough cut of beef to handle, and brisket got the best of Two Urban Licks. Maybe I missed the non-geriatric section on the menu, but the meat had been overly cooked, to the point where it was practically mush. Granted it was well flavored mush, but still mush. I also was not a fan tomatoes and sprouts on the empanadas. Those little touches seemed to fly in the face of the idea of empanadas as hand held meal.

My sister tried another route for her appetizer by choosing the free form ravioli. When we first saw that on the menu, we had a lively discussion about the term “free form” and how it applies to ravioli. I had to play my role of the cynic and say that “free form” is a nice way to saying that it isn’t ravioli at all. 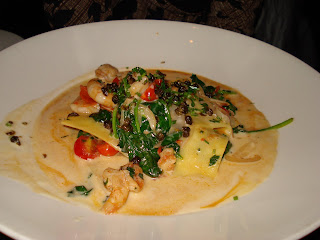 When the dish arrived, my cynicism was validated as the dish was little more than shrimp, spinach, grape tomatoes and ravioli sheets in a lemon butter sauce. I had a taste, and while it had the appearance of disheveled pile of food, it delivered on flavor. Still, they really should rename the dish to something more descriptive and stop trying to pass this off as ravioli.

In between the appetizer and main course, Two Urban Licks takes the chance to fill you up on cheap carbs, but they are delicious, cheap carbs. 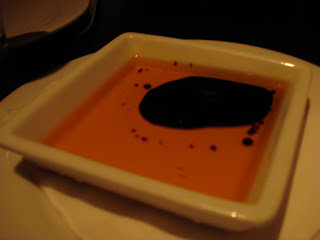 Our waiter brought us this dish of house chili oil with balsamic vinegar complimented with warm, chewy flat bread. This dish did bring up the opportunity for my sister and me to commiserate over the definition of heat in the South. Our waiter told us that this oil was spicy and that we should be careful. Once we had a taste, we both agreed that it was very flavorful, but there wasn’t the slightest bit of heat. It really seems that “spicy” food in Atlanta is far from it. In fact my sister put it best: “When something is spicy here, it tastes normal, otherwise it just tastes bland.”

As soon as we arrived at our conclusion on spicy food in Atlanta, our waiter arrived with our entrees. I had chosen the tanglewood farm duck breast. 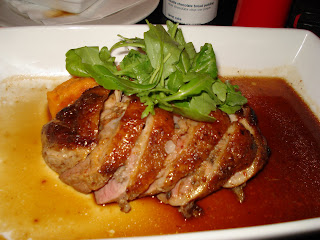 I have to be honest; this was as delicious as it looks. The duck was delightfully moist yet still retained the crunchy skin that I always look for in a duck breast. I’m glad to say that the ancho bbq jus was a background player in this dish. The Italian sausage that was stuffed into the duck breast was a nice touch, but I wish there had been more. The only real complaint about the dish was the sweet potato puree. I’m really not a fan of sweet potatoes, and this puree was potent. It completely overpowered the duck and I spent the remainder of the meal trying to think of a dish that I would pair it with.


For my sister, the bistro tender was her choice for entrée. 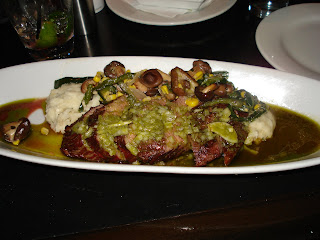 This was a busy dish with herb whipped potatoes, corn, poblano peppers, shitake mushrooms, and chimichurri all sharing a plate with the steak. The steak was very well cooked, but I was disappointed in the chimichurri. I was expecting a potent sauce and was met with an insipid and watery pool of liquid.

When we were leaving, my sister brought up the fact that she and all of her friends had been to Two Urban Licks, but not one of them had ever been back. It wasn’t because the food was bad, it was because there too much to try in Atlanta, and Two Urban Licks didn’t have anything to make you want to come back. I believe that summarized my sentiments exactly. This was a nice meal at a lovely restaurant, but Two Urban Licks isn’t something that I have to go back to immediately.

Ha! It seems you have reviewed every restaurant I have found interesting from Jackson to Atlanta and everything in between!!! Oh... when I saw that picture of the Duck Breast, even before I read what you wrote, I was like... YUM! Your description sounds just like I like it with the skin really crispy. I'm not a big fan of Sweet Potatoes either. I wonder if you can get it with something else or just have them leave it off?