While many people were glued to the cable news channels last Tuesday, my mother had decided it was a good night to dine out. After inviting the family broker and Sam the family computer technician and webmaster/guinea pig for the website, we all made our way to Nicks. 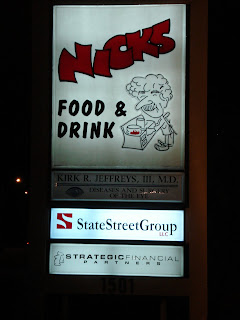 If you’re like me, then the chowhound forums are your best friend; and if you happen to do a search for Jackson, Nicks is always a favorite. Founded in Jackson in 1983 by Nick Apostle, Nicks is one of many Jackson restaurants that is run by Greeks, but Nick’s is the crème of the crop.

Nicks features many appointments of a classic restaurant with touches like a leather booths, dark wood décor and furniture, a stellar wine list, and a top notch wait staff. However, there is a downside when you first sit down to a meal at Nicks, the toasted baguette slices. 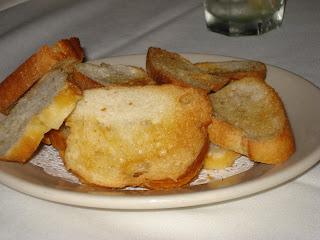 You honestly cannot stop eating them, they’re just too damn good, and they actually ruin your appetite for the rest of the meal. It doesn’t help that each diner is given their own slab of butter.

All breads aside, I decided to try one of the specials for an appetizer, the fisherman’s crepes. 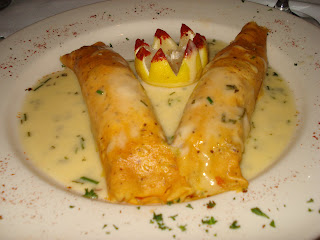 Good savory crepes are hard to come by, but this was a real treat. Filled with crab, shrimp and little bits of sausage, it’s a shame these aren’t a regular on the menu.

The webmaster took a different route for his first plate. 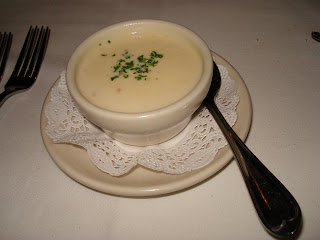 Brie and crab soup is one of the family favorites, and deservedly so. It’s a rich soup with a fair amount of crab meat. This soup could be a better dish if it featured more lump crab, but it’s delightful as is.

I knew that I would be writing about this meal, so I played it safe for my entrée and ordered my favorite: the “Frenched” pork chop. 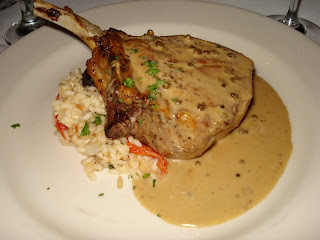 A stellar cut of pork, weighing in at 14oz, I made a few changes to personalize my order. Instead of the fennel veal demi, I substituted the green peppercorn cognac cream from the filet. I suggest you try the fennel sauce first, but after a number of tries, I have found the peppercorn cognac cream works better to my taste. And what a taste, this is a succulent cut of pork that should be enjoyed and savored.

The other substitution I made was the risotto in place of the sweet potato mash. I’m not a fan of sweet potatoes but after trying the risotto, I would have been better off with the mash. The basil was overpowered by the taste of the olives, and the rice was crunchy and obviously undercooked.

Peer pressure is a terrible thing, and it was peer pressure that drove me to desert. They were featuring a new cheesecake at Nicks and I decided to give it a try. 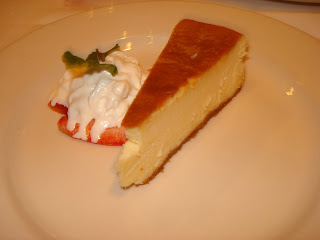 Their new cheesecakes had a nice consistency, but I generally enjoy a thicker cheesecake, more like the ones made famous by New York. The slice came with a choice of sauces. 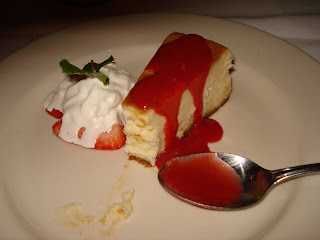 I went for the raspberry sauce, and was disappointed. If you have to cover your cheesecake with nauseatingly sweet syrups, you need to go back to the drawing board. If it hadn’t been a new desert menu, I would have skipped desert completely, but that’s me, I prefer savory to sweet.

The title of “best restaurant in Jackson” is a difficult choice. Nicks makes a good case, but I’m afraid it doesn’t get my vote for the best in Jackson. However, Nicks is an excellent restaurant, and one of my favorites in the area. If you’ve never been, you should rectify that immediately, but if you’re like me, you’ve been a fan for years and will continue to be for many years to come.