MF or Magic Fingers Sushi Bar has been described as Atlanta’s premier sushi dining destination. The original location is situated on Ponce De Leon Avenue and it really eschews the image of a traditional sushi bar. Sure there is the standard sushi bar with highly trained sushi chefs hard at work, but the rest of the restaurant is a modern interpretation of the sushi bar. They still hold onto the light colored furniture and smattering of Japanese characters, but the rest is as modern as can be.

A quick glance at the menu reflects the style of the restaurant. There is the standard list of nigiri sushi and the usual rolls such as spider or California roll. However, there are a few standouts, namely lobster. The lobster dishes are the main reason I paid a second visit to MF.

First things first though, edamame was the first appetizer of the day. 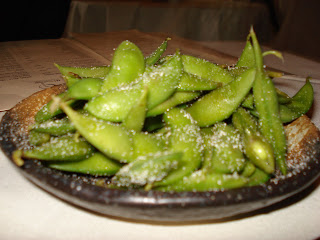 It’s really difficult to mess up edamame, seeing at its nothing more than steamed soybeans. MF starts off well with a pleasing presentation of the pods complete with a healthy dusting of salt.

After the edamame, we arrive at what I think is the star of the show, the baked lobster tail tempura. 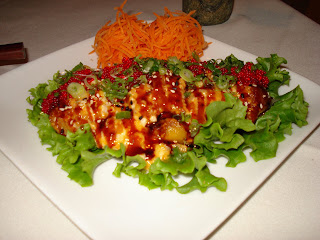 Even though it does look a little bit messy and overrun with sauces, I can say without hesitation that this is one of my favorite Japanese dishes. The lobster meat is perfectly cooked and balances extremely well with the cream sauce and other toppings.

Enough of the appetizers, it was time to focus on the sushi and to see if the name “Magic Fingers” was deserved.

My sister started it off by ordering some standard sushi fare, a Tony roll and a spicy tuna roll. 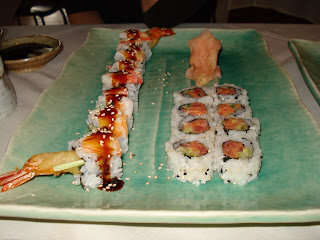 The Tony Roll may not sound like your average roll, but in reality it’s a shrimp tempura roll topped with a piece of boiled shrimp and drizzled with eel sauce. Both the Tony and the spicy tuna roll were pleasant rolls, and present the problems with this sort of sushi. It’s hard to make these stand out from other versions, it’s only when they’re done badly that you can truly tell a difference.

I took an entirely different route with my choice of sushi. 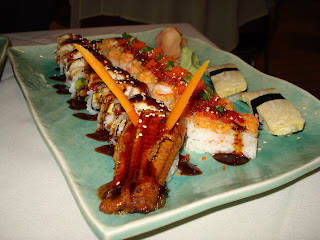 Pictured here is a dragon roll, a magic fingers lobster box, and an order of tamago for some variety. Let’s start with the most obvious piece, the dragon roll. The dragon roll is a rather simple concoction of a California roll topped with a whole eel and then drizzled with eel sauce. As much as I like eel, this roll was a meal unto itself and was really too much. I have to give MF credit for the presentation; the carrots really do make the roll look like a dragon albeit an ugly one. 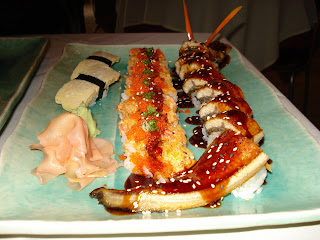 Here’s a better view of the dragon's tail and the Magic Fingers Lobster Box which is a layer of flying fish roe and steamed lobster pressed into a sushi box. I’m not sure what sauce was on top, but I believe it was more eel sauce. That really seems to be the case for Japanese restaurants, when in doubt, use eel or teriyaki, nothing like a sugary sauce to make everything better. Anyway, the lobster box is an excellent little dish, and has been on the specials menu for over a year. It has one fault, that it is preceded by the lobster tempura appetizer. It just can’t compare.

The tamago or egg custard nigiri was pretty standard fare, nothing writing home about, so I’ll stop.

Sushi really has come a long way in the United States, particularly in the South. What used to be a novelty can now be found in grocery stores across the region. MF does a nice job with their presentation of both classic and new sushi dishes, but I feel like MF is more glitz than substance at times. When a bill can be upwards of $100+ per person (particularly at the Buckhead location), it just seems too much for a food than can trace its origins to mobile food carts. However, I would call myself a fan of MF if only for the lobster tempura.