Matzo Ball Soup by a Goy

Growing up in Mississippi, one is not often exposed to Jewish cooking, but that all changed once I arrived at college. At GW, with a 45% Jewish student body, its impossible not to have Jewish friends. As a result, I had my first true exposure to Jewish cuisine, and one dish that captivated me was matzo ball soup.

Matzo ball soup, or “Jewish penicillin”, is really a simple dish, nothing more than a good chicken stock and matzo balls. As simple as it sounds, my friends told me that no goy can make a good matzo ball soup. This past weekend, I finally set out to prove them wrong.

Per my friend Marsha Rose, the key to a good soup is the chicken, and it must be a kosher chicken. Being in Jackson, kosher chickens are hard to come by. Luckily, my sister in Atlanta lives near a kosher market. So, when I last went to Atlanta, I made sure to stop by and pick up a few chickens for the ride home.

I began by washing the chicken and then placing it in a pot of cold water. 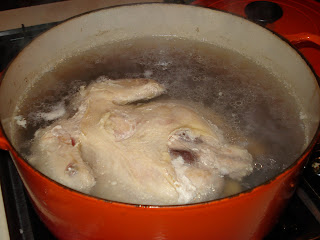 I brought it to a boil and made sure to skim off the scum from the bone marrow.

While the chicken was coming to a boil, I set to work on chopping up my vegetables for the stock. 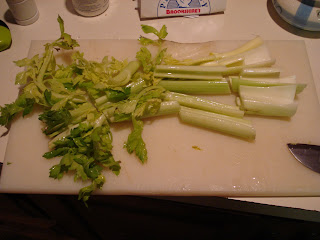 First off celery, and with about 6 stalks, I might have over done it. The stock did have a distinct celery taste, but it evened out in the end. At my dad’s suggestion, I made sure to use celery stalks with a lot of foliage, because the leaves are full of flavor. 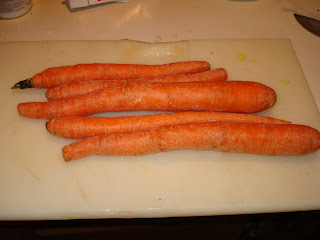 Next up, five carrots, coarsely chopped, organic off course, were added to the bowl. 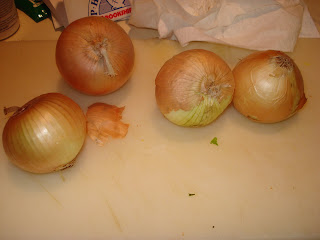 Rounding out this nice mirepoix were 4 medium sized yellow onions. 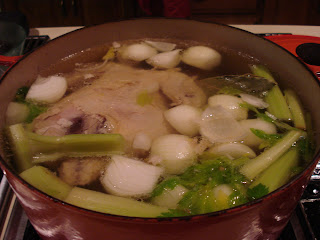 Everything was thrown in the pot and brought up to a boil, and then lowered to simmer. Again, at the recommendation of Marsha Rose, I added a couple of bay leaves.

After an afternoon of light simmering, I ended up with this. 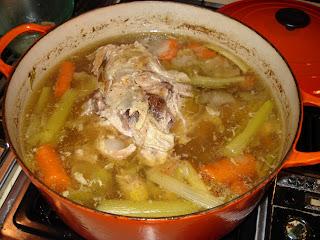 Kosher chicken or not, that’s a pretty healthy looking pot of stock. I knew that I wouldn’t have time to make the matzo balls today, so I let the pot cool on the stove. I then strained out the vegetables and picked the meat off the chicken and then put the stock in the fridge outside.

The next morning, after church, I pulled the pot out of the fridge, and I was expecting a big disc of chicken fat, but was greeted with this. 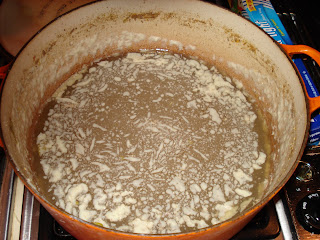 I was in a bit of a dilemma at this point. On one hand, Marsa Rose told me to take out the schmaltz and save it for cooking later. On the other, my mother had always told me to leave the fat in for an extra rich soup. Seeing as it would have been annoying to fish out those little droplets of fat, I left them in there.

Next up was the main attraction, the matzo balls. Now the gentleman at the kosher market had told me to use Streits matzo meal, but all they had at the Brookshire was Manischewitz. 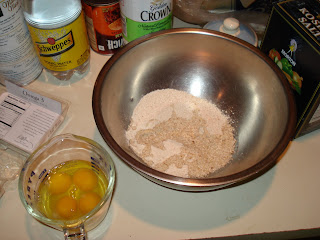 Using the recipe on the box, I put a cup of matzo meal in a mixing bowl and added two tablespoons of oil. I’ve read that people use the schmaltz in place of oil for extra flavor, but I hadn’t saved any chicken fat, so oil it was.

I then added 4 beaten eggs and 4 tablespoons of seltzer water. Why seltzer water? Everyone I had asked told me to use seltzer water instead of tap water. The seltzer was supposed to make the matzo balls light and fluffy. I suppose it was due to the carbonation.

After mixing, I covered the bowl and left it in the fridge for 20 minutes or so. 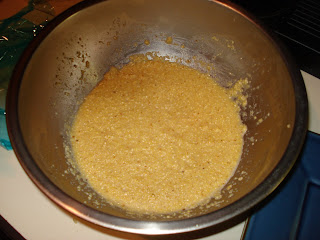 I picked this out of the fridge and set to making matzo balls.

Luckily, I had read that matzo ball dough is extremely sticky, and I had the foresight to dip my hands in a bowl of cold water. 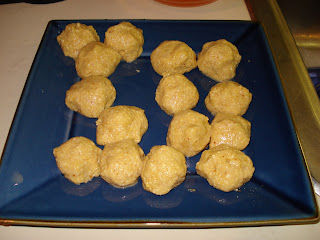 That’s it! 15 matzo balls, and in retrospect, I should have made them smaller.

Again, I was at a crossroads. Several recipes had said to boil the matzo balls in a separate pot, but I decided to boil them in the chicken stock. 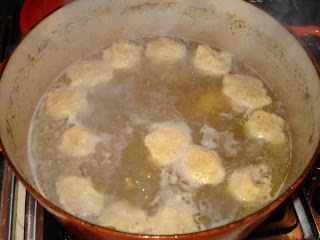 They began to grow almost immediately. 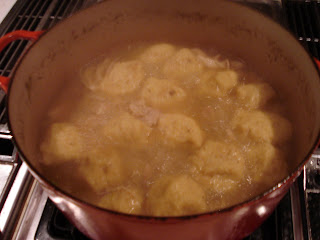 After about 15 minutes, I decided to add the shredded chicken to the pot. I know many recipes call for just a matzo ball in broth, but I like my chicken soup to have chicken damn it!

30 minutes soon passed, and when I opened the lid, I was greeted with this. 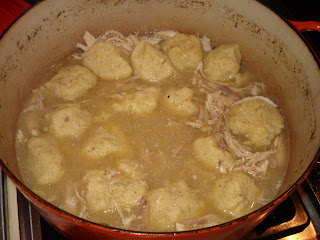 Doesn’t look too bad for a goy’s first time does it? 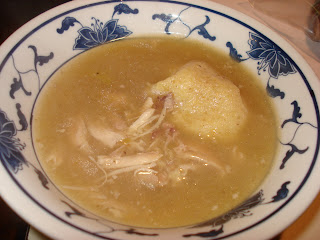 It looks even better in a bowl, and needless to say it was delicious. In fact, my dad and I had two bowls before we decided that we should save some for later.

At the end, I realized that I should use a bigger pot next time. There just wasn’t enough broth for all the chicken and matzo balls. Being in a cooking mood, I decided to get a jump on next time. 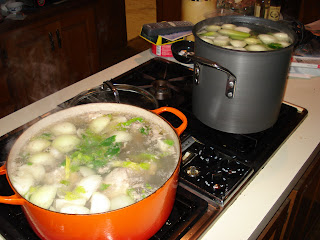 The pot on the left features a package of chicken bones, and the one on the right has a whole chicken. Now there are three containers of stock and two containers of chicken meat, ready for the next time someone has a cold, or I just want to make some soup.