As I mentioned in my review of Nick’s, a number of Jackson’s best restaurants are run by Greeks. Anthony Z’s, in Madison, is no exception, and like all good restaurants in Jackson, it has a good bit of history to it.

Anthony Zouboukos, is the son of Mr Zouboukos, the founder of the Elite in downtown Jackson. After the death of this parents, the ownership of the Elite changed hands and in the opinion of many loyal patrons so did the quality. As a result, Anthony founded Anthony Z’s a few years ago.

For any of you who have frequented the Elite, you will notice many of your old favorites in Anthony Z’s, but many of the nuances cannot be replicated. The wait staff at Anthony Z’s is young and prone to error. They lack the know-how and experience of the Elite’s staff, mostly because they haven’t been serving for 30-40 years like the Elite’s employees. Also gone is the familiar diner style interior, replaced with new take on the Zouboukos name.

Although many things are missing, Anthony has done his best to replicate the menu. 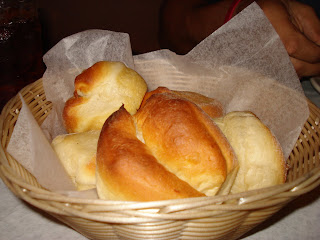 The beloved yeast rolls are in abundance, but they are missing some intangible ingredient. Rumor has it that Mr. Zouboukos took the recipe with him to the grave. As good as Anthony has done with the rolls, each table sorely misses the house dressing in a bottle.

When you order the house salad: 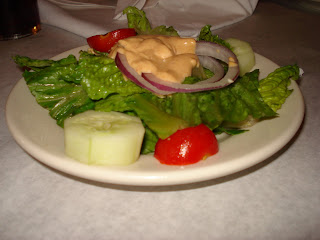 You get a taste of the wonderful dressing, along with crisp iceberg lettuce and fresh cucumber slices.

Greek owned restaurants in Jackson have some of the best shrimp in town, and Anthony Z’s follows suite. 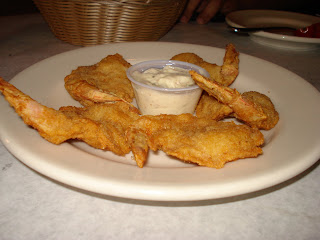 With an appetizer portion of fried shrimp, you get a plate of cornmeal crusted and butterflied shrimp. The shrimp have a delightfully crunchy crust and are well complimented by the tartar sauce.

The main attraction of Anthony Z’s is familiarity, and for me that means the hamburger steak. 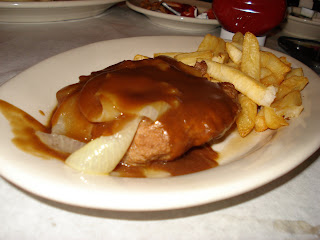 It’s a simple dish, nothing more than a large hamburger patty smothered in onions and brown gravy, but it was my favorite dish at the Elite when I was growing up. Anthony’s take on the dish delivers the same satisfaction, although the dish is missing the rice and gravy side to which I am accustomed.

My buddy and webmaster, Sam, choose his favorite Elite dish, the veal cutlet. Again nothing too fancy, a simple breaded cutlet in cream gravy, this is a trademark dish of the Elite. I thought that it was a faithful reproduction of the downtown classic, Sam differed in his opinion. Sam summarized that this was a good dish, but the Elite’s was just better.

What can you really say about Anthony Z’s? On its own, Anthony Z’s is a fine restaurant and is sure to become a fixture of the Madison landscape, but it is its own worst enemy. By trying to recreate the old Elite, Anthony Zouboukos has set an unachievable standard. No matter what he does, he can never attain the 50+ years of meals and memories that his parents had at the Elite. Still, I will continue to be a patron of Anthony Z’s and remember the days when the Elite was run by Mr. and Mrs. Zouboukos.

I believe Mrs. Zouboukos is still alive and, in fact, you will find her most nights at The Elite in the first booth on the right, since her daughter runs the rstaurant.

Just a note.... Mrs. Zouboukos recently passed away. Very sad for the history of Jackson as with each passing year the elders are gone. I ate at Anthony Z's right after they first opened. There was the usual chaos of the opening weeks. I thought the food was good but the service was horrible. My companion was not from Jackson and didn't "get" the whole Elite connection. I've not been back but I plan to go in the near future just to see how it's improved.

I always enjoyed the food at Anthony Z's, but the front of the house is terribly run. The waitstaff appear to have had no training, and it shows. My last trip there they were shorthanded out front, and the only experienced waitress was struggling to get food from a slow kitchen to her increasingly impatient diners. The young mananger acted as though he couldn't be bothered, and never once attempted to address the holdup in the kitchen or assist the waitress in any way. Tables went unbussed and water glasses unfilled as this young man simply looked on as if the whole thing had nothing to do with him.

Poor service is the reason I no longer dine at Anthony Z's, and I have friends who have likewise given up on that restaurant.

I really believe that is so amazingly to have all this meals, they are so tasty and very delicious to have all on my plate. Buy Viagra Viagra