Chili really is an enigma, there’s no such thing as a standard recipe. As I wrote before in Chili, An American Pastime, my chili changes every time. This instance is no different.

I was asked by my mother to make a batch of chili for our Vicksburg branch, and I was told that they love spicy food. To me, that meant free rein on the heat with peppers aplenty. Using whatever was at hand, I set to work on my batch of fire breathing chili. 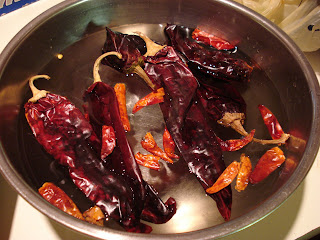 First up, cascabel, New Mexico, and tien tsin peppers were all placed in a bowl of hot water to rehydrate. I’ve used New Mexico peppers a number of times before, and I seem to have a lot of packages of dried one lying around the kitchen, so that explains that one. The cascabel was a new one to me. In fact, I only knew of it because Mr. Brown used dried cascabels in his recipe for chili powder. They seemed to provide a nice flavor. And of course, the wild card of the bunch, the tien tsin peppers. I actually bought these from the Spice House website to use in stir fry, but there were so few left, I decided to use them in the chili. 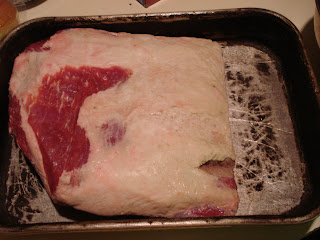 It’s amazing how different this brisket looks from the one from Flying M Farm. That’s a solid fat cap; I suppose it’s a product of industrial beef. My guinea pig/webmaster, Mr. Sam, said that the meat was still tasty in this batch but lacked the quality of the free range batch. I had to agree, but it’s hard to get a hold of beef like that on a regular basis. 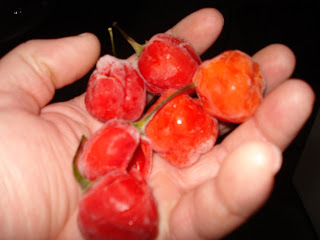 To give this chili a real kick in the ass, I tried to pull out the big guns. Enter the home grown habaneros. These are the ones that have frozen in liquid nitrogen, and they seem to have held up remarkably well. 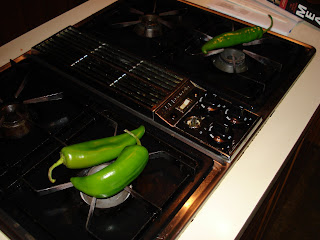 It may seem like a redundancy, but I’ve found that charring peppers imparts a subtle smoky flavor to the chili. The reason I say redundant is that these are fresh New Mexico chilies in addition to the rehydrated ones. Oh well, it’s my chili and I’ll do as I damn well please. 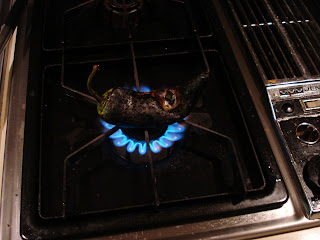 That’s a good char. If you don’t have a gas range, you can do this in the oven, but it’s not as much fun. 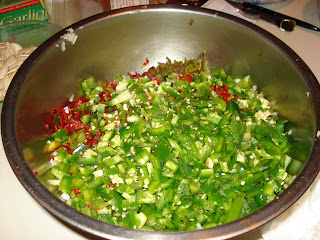 Much the same greenery as before, bell peppers, jalapenos, garlic, the dried peppers, the charred ones, and onion, as with the spices. 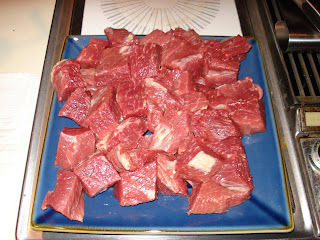 I wanted to include this picture as a comparison to the bowl of free range brisket. The visual differences are subtle, but the taste is where it really counts. 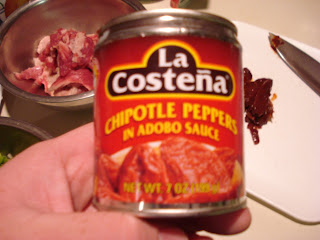 Chipotles in adobo is an ingredient that I was using back when I started this recipe a few years ago, but it’s one of those things that slips my mind every time. If you’re going to make your own chili, you have to give these a try. They just smoked jalapenos in a sauce, but it’s a great addition to any chili, and one that you and your guest will appreciate. 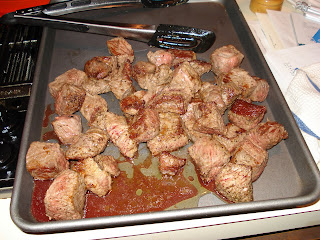 I have no reason to put this in here, other than I like a picture of seared beef. Salt pepper, beef, and oil meet in a hot pan and make magic. 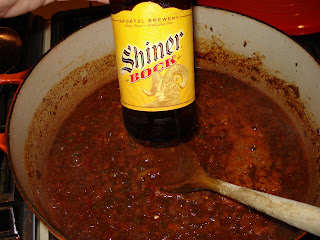 Now here is a major difference from other chilis, the reintroduction of shiner bock. I used a 99 helles shiner in my last recipe, and while it had its own qualities, the king of chili will always be shiner bock in my mind. I has that perfect flavor to complement the spices and beef. 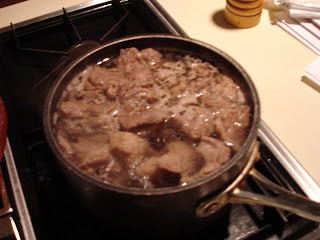 A second major difference in this batch is the issue of beef stock. I didn’t have any in a carton, and so I used my mother’s trick of boiling beef trimmings for a half hour to get a quick and easy beef stock. I suppose it does pay to save the trimmings. 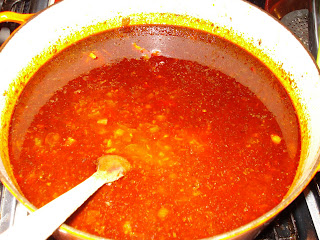 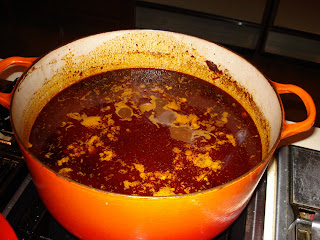 The end of day one, and it came together quite nicely.

Aside from a few major changes in the liquids, this batch was remarkably similar to the first posted batch, but I expected that. Each instance of this recipe will bring its own subtle nuances to the table and this one delivered a richer flavor but with a slightly lesser cut of beef. Mr. Sam and I did to come a startling conclusion though, freezing peppers saps away some of their heat. Even though I used five habaneros, seeds and all, the heat wasn’t overwhelming. While that may have allowed all of the other flavors to truly shine through, I was a little disappointed. Still, I know that next time the results will be different once again, and I’m looking forward to that.