When Jonathan Gold of Gourmet Magazine calls it “the single best Thai restaurant in the country”, expectations are astronomical. And if all the ravings on the Las Vegas thread proved to be valid, then Chowhound just might bat 2 for 3.

The outward appearance leaves much to be desired, as its situated on the seedy end of the strip on the seedy side of East Sahara Ave, but hey, the Thai House in Jackson used to be on McDowell road, and that’s not exactly where the Jeffersons would want to move on up.

As everyone had said, service was more than a little on the slow side but you don’t venture off the beaten path and expect white gloves and valets. The food was the main attraction, and it did not disappoint. What was disappointing is how long it took the three of us to pick our choices. I found myself easily lost in a variety of Thai food that was all new to me, but choices were made, regrettably we had to leave some men behind for the next trip. 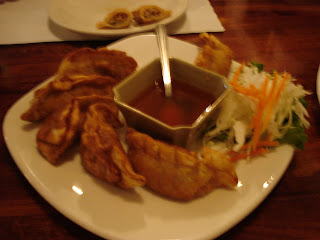 These dumplings were like the duck that would soon follow; on their own they would be superb but when you compare them to the rest of the meal, you feel a little blasé towards them. Plenty of filling, nicely fried, but still up against tough competition. 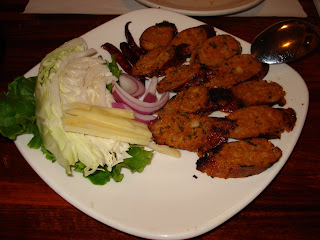 This is from the northern section of the menu, and the description said that “if you like Louisiana style hot sausage, you have got to try it.” So I did! I’m glad I did, because sausages don’t get enough exposure in Asian cuisines. These had big chunks of herbs in them and would be a repeat order. 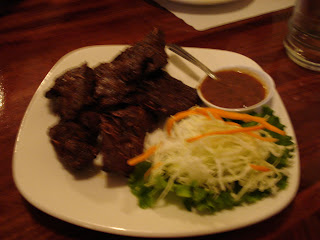 I honestly didn’t know what to expect with this one, as I picked it up from a chowhound recommendation. It was just hot pork jerky but combined with the chili sauce, it kicks oberto’s ass any day of the week. 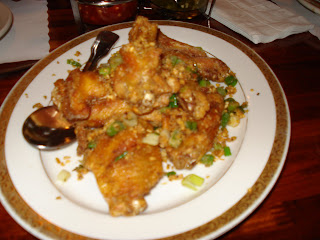 A tough choice really, only because they had multiple style chicken wings including ones stuffed with ground pork. My God! Food is a sinfully wonderful thing! But we went with the tried and true garlic wings, and we ended up fighting over them. Crisp, not greasy at all, and overrun with flavor, they were worth every battle wound.

And now, onwards to the entrees, and one will not be disappointed, except with the duck, which as I previously mentioned was up against stiff competition and just couldn’t survive on just its mettle. 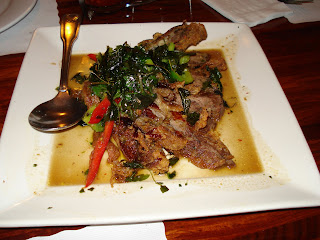 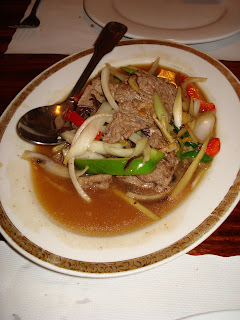 I’m not sure how we picked this one. I think the simplicity of it was so appealing, and believe me there was nothing outlandish about the ginger beef. This was just fresh ingredients put together in an incredible way, really a fine example of the sum being more than the parts. 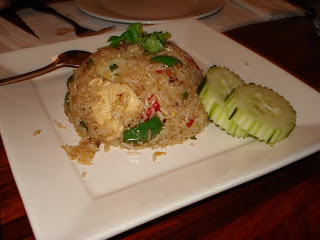 I want to tell you that this was the fried rice to end all fried rices. I wish I could, but those words belong to my mother. I had but a pittance of the rice, and when I looked up, it was all gone. It wasn’t as spicy as I expected, but damn was it good. 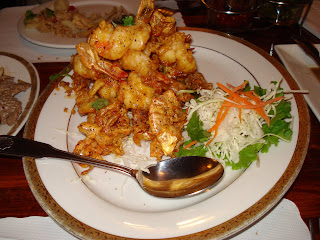 This is last meal material. I’m not exaggerating. If I, for some unknown reason, was before the firing squad, and I was given a last meal, it would be the garlic prawns. They were so damn good that I started eating the shells after the meat was gone.

There really are few bad things that I can say about Lotus of Siam. The service is borderline miserable until you get their attention, then it’s tolerable. I will say that arranging transportation to and from the restaurant is a must, lest you call and wait for a cab like we did. Transportation aside, if you are in Las Vegas and you don’t go to Lotus of Siam, you’re a grade A putz.