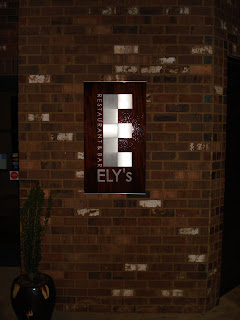 Now that I’ve finished up all of the major write ups from my vacation out west, it’s time to start the rounds at what Jackson has to offer. What better place to start than with Ely’s, a Ridgeland restaurant that Delta Magazine calls a “choice dining establishment” that “caters to guests who are looking to surpass their expectations”. Apparently writing for Delta Magazine gives people low expectations for their restaurants.

To begin, Ely’s is a little hard to find. There’s a sign on Jackson Street that juts out from the building, but you have to look upstairs in the middle of a seemingly empty building to find the place.

I’ve tried once before, and I had great expectations for their stuffed flounder. I was disappointed to find a flavorless meal. So this time I decided to try a different route. I ordered a bowl of their seafood bisque and the scallops appetizer.

A pleasant looking bisque was soon placed in front of me. 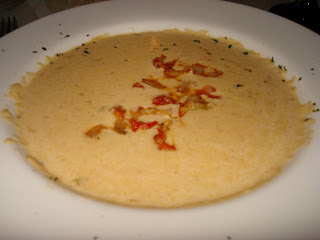 It did have a lovely and creamy flavor to it, but the seafood itself was another story. The shrimp had been on the burner for too long and were more than overdone. After a few spoonfuls I was struggling to find something besides shrimp that would make this a seafood bisque and not just shrimp bisque. After a few moments of searching, I got a few spoonfuls with texture. I decided that it tasted of scallops, granted they had been ground so fine they were almost a puree.

A few minutes later my scallop appetizer arrived as my entrée, even though I had asked for the bowl of bisque as an entrée 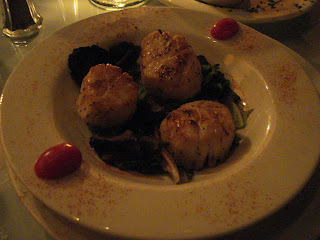 Thankfully Ely’s did avoid the pitfalls of scallops as these had been lightly cooked and not turned into slices of rubber. These scallops were a nice appetizer portion. Dusted with a little cayenne and laid on a bed of greens, I enjoyed them immensely.

I knew that I needed some sort of vegetation for the meal, so I had ordered a side of asparagus. Asparagus is one of my favorite vegetables, and I was pleased with what I received from Ely’s 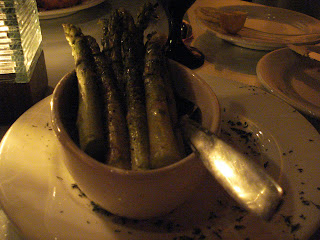 They weren’t grilled, I suppose they had been sautéed, and sautéed well. Not overdone, and sprinkled with a pepper herb mixture, the asparagus were the best side I have had at Ely’s so far.

Overall, I don’t know if Ely’s deserves the accolades that they received from Delta Magazine, but it doesn’t hurt for them to feature the review on their homepage. Ely’s is a nice change of pace from the usual group of Jackson restaurants, but it needs to improve, especially on the flavor and texture of their seafood dishes. I’m sure that I’ll be back to Ely’s and will have another dish to pass judgment upon.