Fun with the periodic table

In my first post An Auspicious Beginning, I was trying to work out how to preserve some of the habaneros from the store's garden. I'm sure drying would work, but where the fun in that? Besides, why not use my employment to my advantage? So I went about freezing my habaneros with liquid nitrogen.

Here's what I started with, a few dozen beautiful peppers, ready to set someone's mouth on fire. 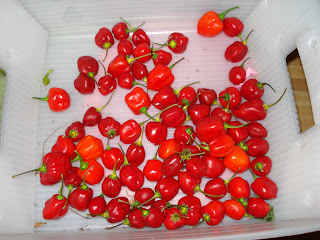 I made sure to store them away in the refrigerator for a few hours in order to bring down their temperature. I learned this from the master of the food network, Alton Brown, in his Good Eats episode Frozen Cache.

Why mess around with a small container of nitrogen, when you can siphon directly from the tank? 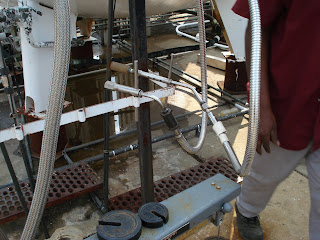 I admit that I had James Archie, who runs the plant, help me with this. I didn't want to burn myself like I did during my 8th grade science project.


After priming the line for a minute, James turned that pan of peppers into this. 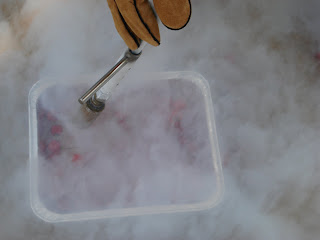 When the smoke began to clear: 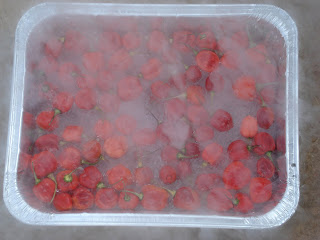 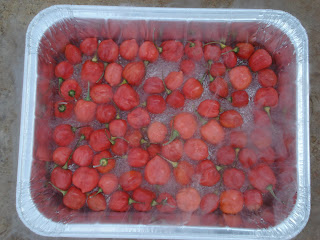 Word to the wise, don't drop the item you just dipped in liquid nitrogen. 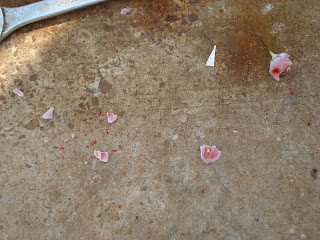 When all the nitrogen had evaporated, I scurried off the break room and stored my peppers in the freezer. I think they were frosting over pretty badly in that scant 40 seconds. 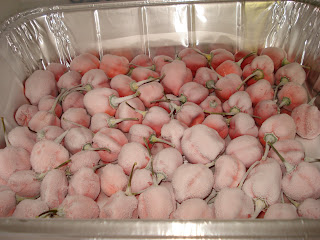 With the indispensable usefulness of a Whole Foods freezer bag, they made it home in one piece and still frozen. They now lie in wait, ready to tear some poor soul's tongue to shreds.

They did look cool. 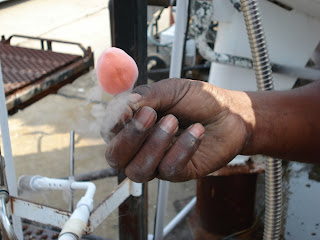 Posted by Cynical Cook at 10:20 PM No comments: Links to this post

ROCK THE VOTE and your liver

I stopped by a local liquor store after work to fulfill my end of a bet. I had bet my buddy and old college roommate Ben Ray that the cowboys would beat the redskins. I won last year and I received a lovely bottle of Four Roses Bourbon. This year, we beat a bottle of Pappy Van Winkle Family Reserve 20 year. Unfortunately for Ben, McDade's Liquor was out, but fortunately for me, this was in stock. 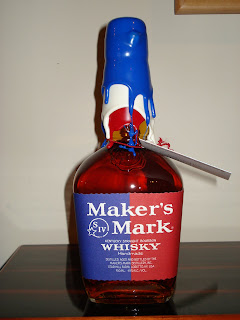 That's right! That is a rock the vote bottle of Maker's Mark Bourbon. I knew I had to add it to my shelf of collectible Maker's Marks.

It caters to both sides of the aisle. 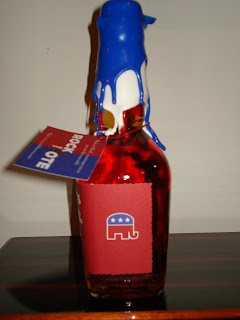 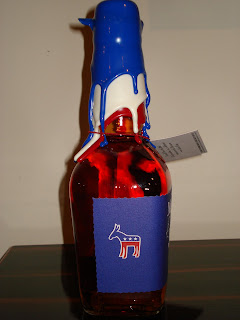 So remember, come November 2nd, do what your liquor bottle tells you, rock the vote!
Posted by Cynical Cook at 7:16 PM No comments: Links to this post

Big D's is a mystery to Google maps, all the addresses that come up are wrong, but I've been told that it started out as little more than a smokehouse with picnic tables. It served BBQ so good, it made the train stop. Growing up in Madison, it was always the pretty good little BBQ place on Highway 49, never too fantastic, but their sausage with a root beer on one of the picnic benches made for some pretty good memories.

My mother picked up some lunch from there today and brought me back some of their sausage. 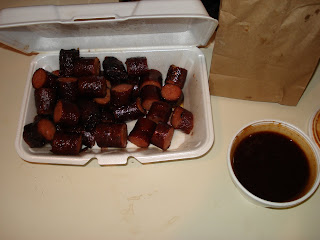 First thing you notice is that is a lot of sausage for one order. It's not that great of a pork sausage, not very much smoke flavor, no crisp snap of the casing when you take a bite. 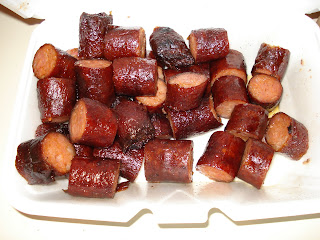 It's just a nice, mediocre BBQ sausage. You really come to expect that in Mississippi BBQ, it's not bad, it's just not great. The sauce on the other hand, I think it's just some grocery store bottle like KC masterpiece that they cooked down a little. 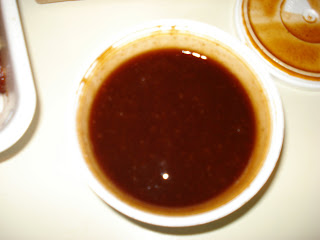 I didn't have anything else from Big D's and I feel like I really can't do this review any sort of justice by reviewing a single item from their menu. I'll try and ameliorate this situation in the future, but that's my half-assed review of Big D's BBQ
Address Flora, MS
Right click for SmartMenu shortcuts
Posted by Cynical Cook at 10:31 PM No comments: Links to this post

Family recipes really are something of an enigma. They're usually some sort of comfort food, and if you believe food network, they are shrouded in secrecy and passed through the generations, but only through the bloodline. My family recipes are pretty big secrets, but not because they're award winning BBQ rubs or million dollar cookie recipes. They're secret because no one knows the exact recipe. It seems like all of them are done by taste or using some obtuse measurement that only my Grandma knew.

I chronicled my mother making her spaghetti sauce today. It may seem incredibly simplistic but it's something that my family and friends love.


It starts out simple enough, with a big pot and 3 lbs of ground chuck this time. 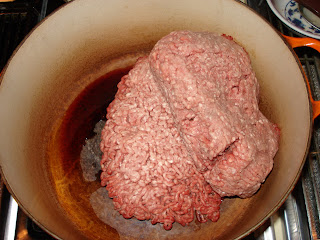 Next logical step, brown the meat. 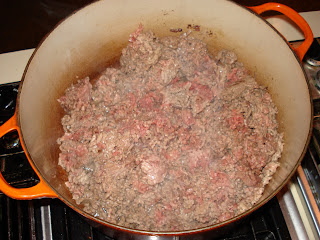 While all that meat is browning, you can go ahead and get your vegetables ready. Here's the list for this batch:
-4 small onions
-1/2 a bulb of garlic, about 6 cloves
-5 small bell peppers - 3 green & 2 red
-1 bunch of celery, 5 stalks in this case
Now mix those up in your handy food processor, or if you've got the patience, dice it up by hand. My mother didn't have the patience. 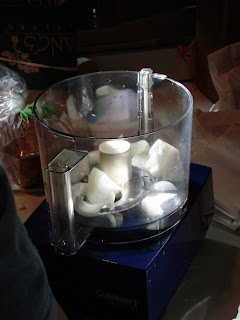 The pot after adding the onions and garlic. 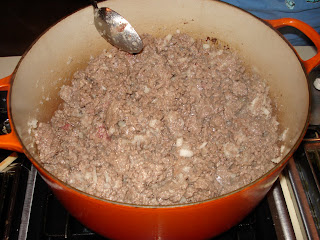 After the bell peppers and celery 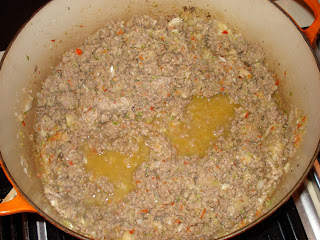 My mother was quick to point out that she would add fresh basil and oregano, if she had them. The funny thing was, I had fresh oregano from the store's garden, it just slipped my mind.

Now here is the tricky bit, the dry herbs.

(All McCormick brand, she loves the stuff)

- She would have used red & black pepper mix if she had it, 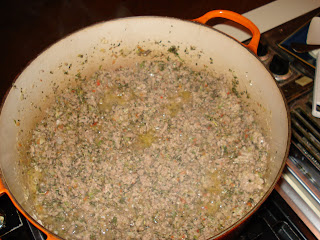 All the herbs incoporated 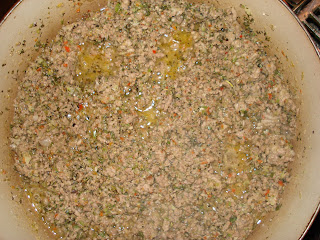 Here's the fun part about trying to record a recipe like this. About half an hour after this picture and the measurements/guesses were taken, my mother told me she added more basil, oregano, and parsley. So go ahead and add an extra half or full tablespoons of those herbs.

You could call the next step lazy, a touch ingenuity, or weird, but my mother uses an existing tomato sauce as a base for his spaghetti sauce. In this instance, the base was 2 jars of Ragu parmigiano reggiano & 2 jars of Ragu sauteed onions & garlic. 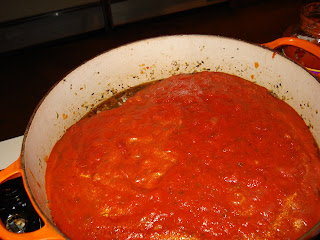 And you can't let any of that tomatoey(I don't think that's a word, but I like it anyway) goodness go to waste, so pass a jarful of water between the 4 jars to clean them out and then dump it in with the rest. 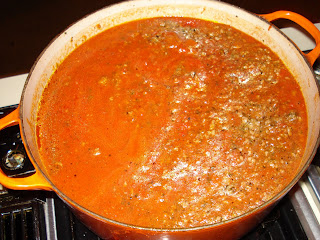 Now stir that all together, bring it to a boil, and the kick it down to a nice simmer. Here's the batch after a few hours. 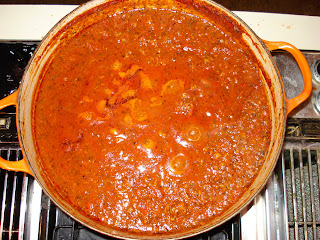 The last and most subjective part is when to take the sauce off the heat. I'd guess this one was simmered for 3-4 hours. When we took it off the heat, it was a little soupy for my tastes, but this batch was being made for our branch managers. 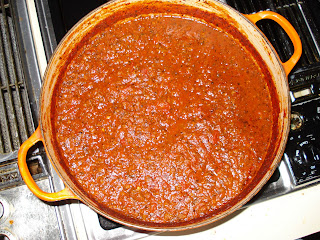 There are several options about the next step. My mother will often freeze the batch in small containers so they can be shipped/carried to my sister. Personally, I get a small bowl full and go to town with it and boast of garlic melba toast. Of course, there's always putting it over spaghetti, but that's such a mundane option.
Posted by Cynical Cook at 9:41 PM No comments: Links to this post

My dad has planted a little garden in front of the store downtown. Here is some of the late season harvest from Friday. It's some nice variety with Poblano peppers, Chinese Giant, Red Bell Peppers, banana peppers, and an overwhelming amount of habaneros.

This presents a number of problems:
1. My go to dish for habaneros is Chili, but I can't make that every weekend. So I need to expand my repertoire of habanero dishes.
2. I'm trying to decide which is the best way to preserve them. I"m going to try air drying them and freeze drying them in liquid nitrogen. We'll see how well that works.
Posted by Cynical Cook at 12:58 PM No comments: Links to this post